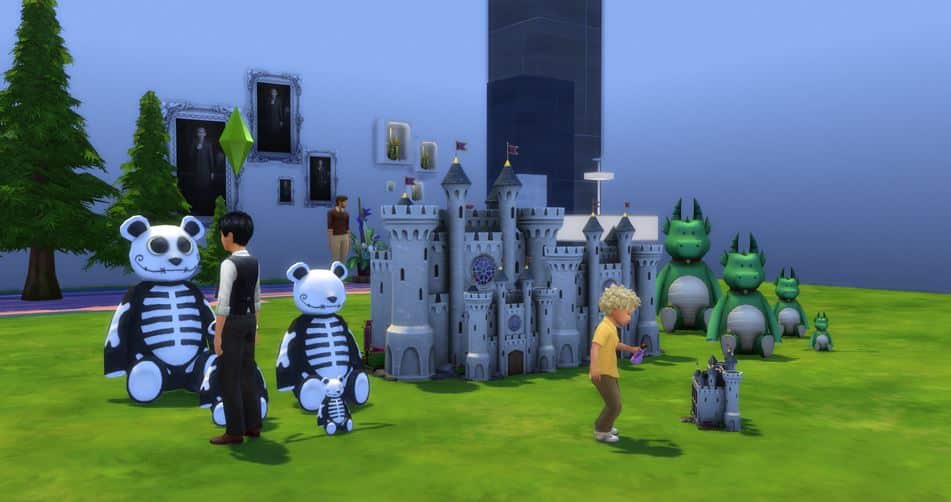 Hi, I’m Jason Sterling. There was a lot of excitement over the new roofs added to the base game selection for the Sims 4. However, I’m someone who loves not only tiny houses but also the tiny apartments in San Myshuno. As such, I was far more anticipating the ability to make things smaller. It’s something I’ve wanted for a long time. I set out to test the new ability and below are my successes and failures and uncertainties while thinking small.

There have always been numerous items that were considered- abnormally large – for the Sims in the Sims 4. Other items size fit their purpose but many of us wanted a smaller version for wider use. There are several examples below and most likely you’ve already thought of most of them. The new ability to decrease their size works very well, by and large. Skully bear and his friends are an exception. You can see immediately that the eyes disappear when sized down and since it is a interactive item the animations only really work on the first size reduction. Still, for decor, such as placed on a shelf it works and if you are a toddler you’ll stand and babble at it no matter what it’s size. We’re not really going to discuss the obvious items though. You know them already. Play around and enjoy.

Below Left: A table top Christmas tree has been a request since their introduction. Now we have it. Use the “9” height slider cheat to elevate the tree into position. Shown here I’ve created a smaller version of the fireplace with a mantle tree and shrunken book-ended wreathes to hold a garland in place for an apartment set up. I’ve shown the next smallest fireplace entirely to illustrate the limits of the tool graphically. For purely decorative purposes I could see the smaller version in bathrooms and bedrooms.

Above right is an apartment kitchen look. The wall panel televisions, reduced in size, make great additions tucked under the cabinets. So does the stereo. I’ve shortened the fridge as an example. At one degree smaller from full height it works without any noticeable graphical oddities. Any smaller, like for a bar set up and visually the sim’s interactions are out of sync. As pictured it makes for an urban or European size fridge.

My two favorite tests so far are below. First, adding ornaments to the tree. You can see the array of different items I chose but use your imagination here. Shrink the item in size and using “9” lift it into place. Hold down the “Alt” button while holding the item and shift it about until it looks right. The inset shows the shrunken snowmen at night. 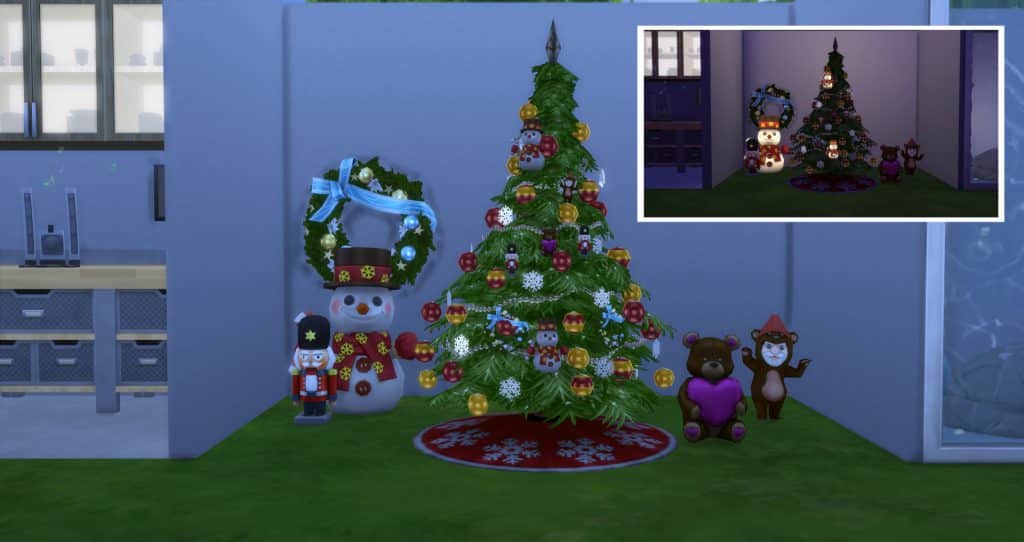 This is my favorite use of shrinking. Take the aquarium, reduce it to the smallest size, then insert it into water to create swimming fish. From right to left you can see the full size items. Then I have shrunken and placed them in the pool. Lastly, I disguised the aquarium box with rocks. In a full build I would continue with other details. This is just an example. 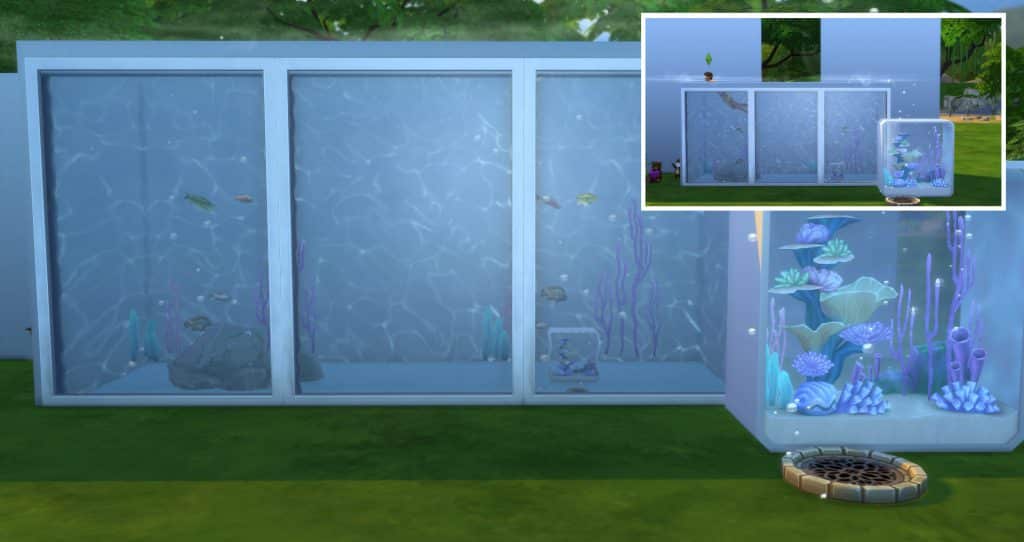 While initially playing with this tool there where several items I tried that I was uncertain about. I’ll illustrate them here so that maybe they will spur your imagination and ingenuity to uncover a use for them that I couldn’t.

The video game system works in a fully shrunken form. IF  you don’t mind pretending the sims are using Wii style controllers and a holographic screen. Which, honestly I don’t. I will use it in this fashion. Further I may place a third cabinet in the middle and pretend the unit was a holographic advertisement display for Myshuno. I shrunk the sofa by one degree. This fits with apartment/small house style. The sims almost sit on it. It needs some tinkering. Then, there is the cupcake factory. I shrunk it to counter size. It does work but only floating in the air, sitting on the floor or on a half wall ledge.  It has to be placed with MOO and “9” if floating or using the ledge. Drawbacks aside, it has a much smaller footprint and I’ll integrate it into my steampunk builds. 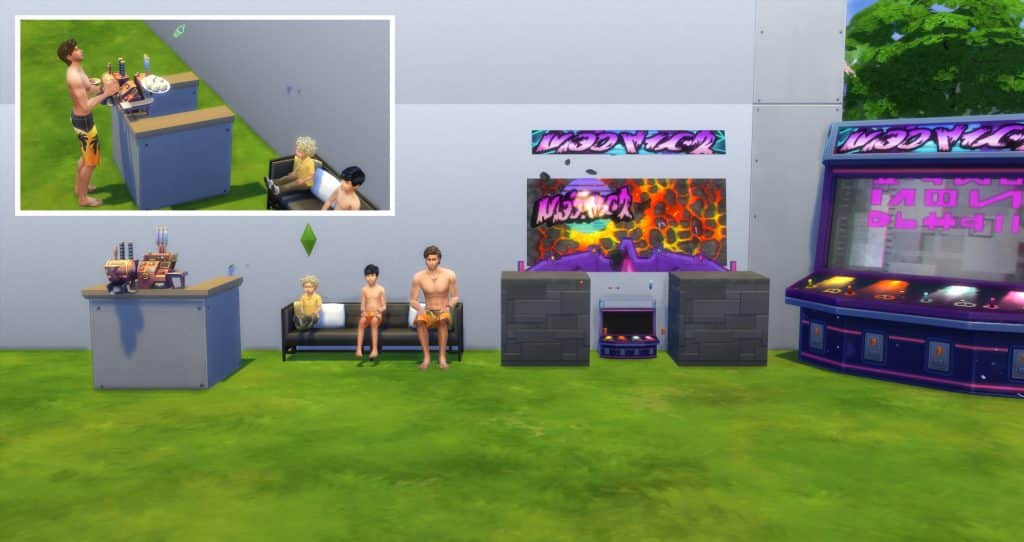 One of my first thoughts was to use a “real” Christmas tree. I loved it and decorated it in the fashion above but, like all trees, it disappears when you are near it. I do have an example of the shrunken presents shown here. They fit far better in smaller size. The telescope and the DJ booth both have large footprints. Here both have been shrunk by one degree. They work well in this fashion but not otherwise. In the end I couldn’t think of a good reason to do so though. The amount of space saved was not great. If you’re reading this and have an idea shoot it my way. I’d love to try it.

Below is an effect I’d really like to hear ideas from people about. I have tucked the smallest hot tub under a table. Then had the sims get in it and positioned the chairs underneath them. At the time I was thinking maybe a seance table. I know, I was reaching but I’m still fascinated by the effect. For story telling it might work well as a seance table. Do you have an idea about it? Let me know. It may go from “maybe” to “definite”. 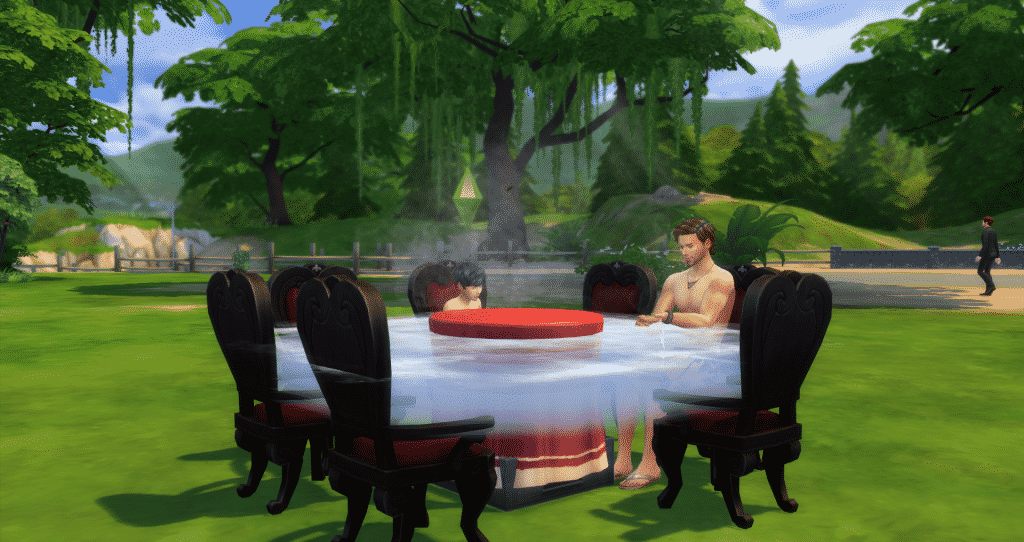 These last items by and large aren’t worth the trouble. The microscope, like the telescope has been something of a point of contention with some due to size but the new tool really doesn’t help. Doors and windows are a lost cause too. You can see two of my closest successes here but they would still require a great deal of accessorizing to enable their use. Even then it might just be wasted effort. 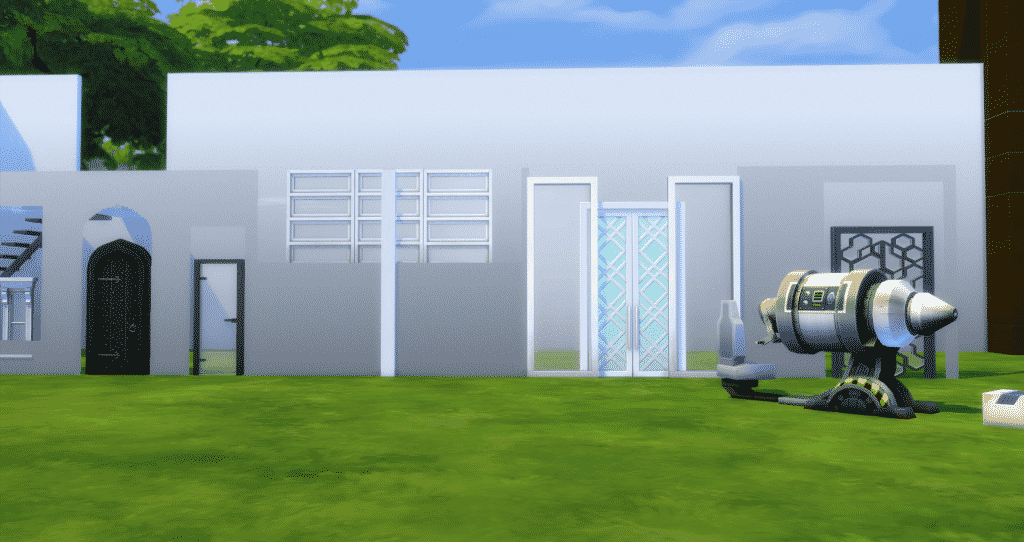 The best part of this new tool is the exploration it provides. Use it in your game see what it leads you too. During my tests I was playing with the awning below. It occurred to me that it would make a charming addition to the mouse hole in San Myshuno. It grew from there and I had to make myself stop or the little mouse would have had an estate sized yard when I was done. Find your moment like that but don’t stop. Just go with it and see where it leads you.

Thanks for reading. I hope you take away a little bit of inspiration and a few ideas to incorporate in to your own design. You can see my Sims and their adventures everyday during Morning in the Americas 5:30am CST on Twitch: https://go.twitch.tv/jasonanthonysterling and at other pre-announced times. Please feel free to follow me on Twitter: Jasonsterling70  Facebook: Facebook.com/MyWorldofSims and the Sims Gallery: Tony Sterling Sims 4 Gallery