Grant Rodiek talks about romance, pregnancy and guinea pig plagues while looking back at The Sims in the latest Playstation Blog entry.

The Sims franchise turns 18 years old this month, which means it’s old enough to drive, vote, and join the military. That is a very long time for a game about getting a job, passing out in a café from sleep deprivation, catching things on fire, and getting dumped. You know, life.

I took a brief trip down memory lane to reminisce about some of the things that still make me laugh and smile after a decade of working with these little digital people.

The soul of The Sims is seen in its animations. Sims speak Simlish — a fake language — but they act so expressively that you know just what they’re thinking. Our animation team is truly world-class, and working with them has long been a highlight of my job.

Back on The Sims 3, I was often given the chance to act out social interactions alongside longtime co-worker and friend Nawwaf Barakat. We had to demonstrate divorce, slap fights, work promotions, planting crops, and operating complex machinery. It truly ran the gamut of life. Which includes romance.

Once, we had to act out a romantic hug. This is the kind of hug a couple is enjoying in the corner of the bar that makes everyone else think “gross.” With a smile on her face, the animator holding the camera said, “Aaaand go.” We stood there, a foot apart, staring at each other. We extended our arms slowly, stiffly, and placed them on shoulders. We then jerked to face the opposite direction and pressed our… heads against each other. You get the idea. We finished and asked how it looked. The video revealed two deeply insecure dudes “hugging,” if you can call it that, in a way no two humans ever hugged. In the end, somebody else had to shoot that reference. 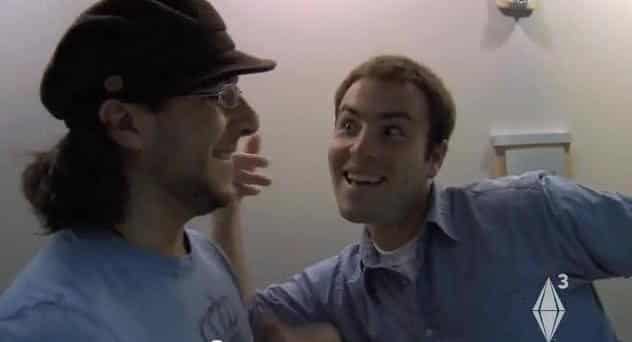 It’s been a while since the founder has worked on The Sims, but their impact still affects our designs to this day.

One example is the guinea pig disease. In the original The Sims, you could obtain a pet guinea pig. How cute! However, if it bit you, your Sim could potentially get a disease and die. And if that wasn’t bad enough, the disease, like a violent flu, was highly contagious. None of this was really explained to players. The development team just casually introduced a world-altering plague.

Every time we release a hamster, or womrat, or any small, fluffy creature, there’s a slight panic in our community. Will this be the return of the plague? All I can say is — maybe.

The DNA of Chester the Sim

Late in the development of The Sims 3, we needed to verify that our genetics were functioning properly. Sims can get pregnant and have children, so it is a reasonable expectation that children resemble their parents. The code looked good, but we needed to manually verify this through trial and error.

So, we tasked a junior producer. Eager to work on a gameplay feature — his typical job was overseeing the text translation process — he created Chester, the Sim shown below. 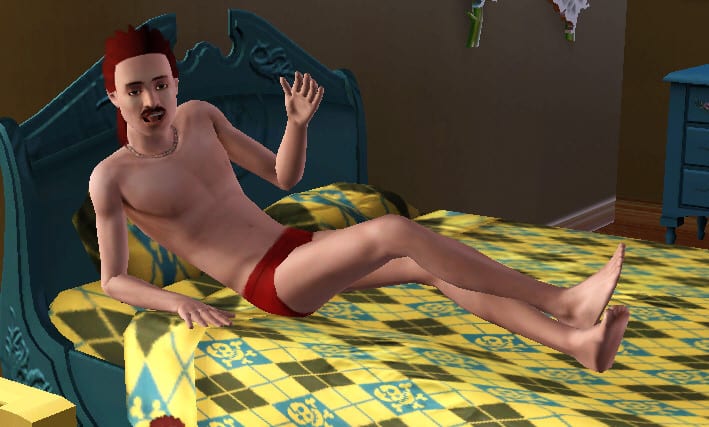 If you create a typical looking Sim, it may be difficult to see if their features truly show up in their children. Therefore, our producer gave Chester flaming red hair, a mullet, a rocking mustache, a skinny frame, and a large nose. Then, he got to work. And by work, I mean he had Chester befriend all the single women in town, sweet talk them, and then stay the night.

Before long, the town was full of very goofy looking red-headed children. Not all of them, of course. Thankfully, for them, sometimes they took after their mother. But, you could see a little bit of Chester everywhere. It turned out genetics were working, and that we had a very strange job.

Pregnancy has always been a part of The Sims. But during development of The Sims 4, there was a brief period where we forgot to check the box that said only women could get pregnant, and everyone was having babies — regardless of whether you chose those gender customization options or not (Whoops!). Below, you’ll see both a husband and wife in labor. 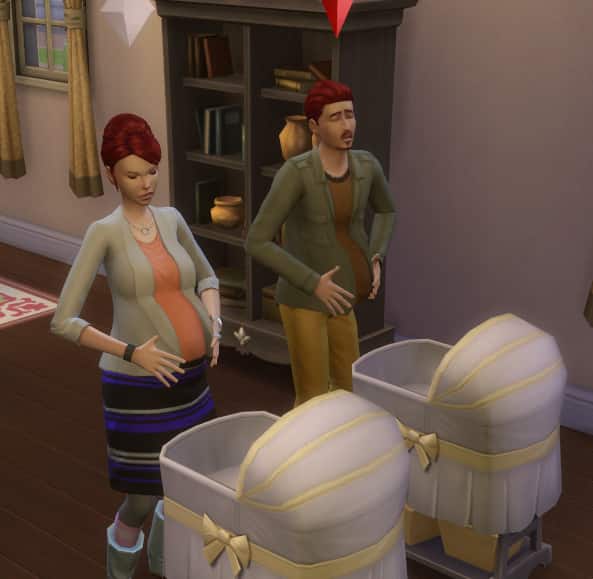 But, that’s not all. New to The Sims 4 is the ability for mothers to breastfeed their infants. But, just like pregnancy, we forgot to check the box that said only women could breastfeed. Mega whoops. It was quite surprising to see dad step up and feed the baby when you weren’t expecting it!

Okay, so we checked that box, too. All good now, right? Nope. We then discovered that any woman could breastfeed the baby. You see, we said men couldn’t breastfeed, but that didn’t prevent your neighbor from coming over to visit, say hello, then breastfeed your infant. Whoops, whoops, whoops.

Finally, we created a new “mom only” checkbox. And checked it.

One of the new technical innovations in The Sims 4 is something we call “multi-tasking.” In previous games, Sims would perform a single interaction at a time. For example, they might only watch TV, whereas now they can eat, talk, and watch TV.

As with everything in this sandbox game, there were many unexpected applications! We spent a very long time slowly turning off and tweaking all sorts of wacky combinations.

No, Sims probably shouldn’t eat dinner while sitting on the toilet.

No, Sims shouldn’t play guitar while using the restroom.

So hopefully we’ve addressed these issues… but I digress!

Working on The Sims has been a wonderful, weird, and hilarious joy. We love our fans, their passion, their creativity, and their amazing support. We’re so thankful you’ve let us call this our job for eighteen years, and we look forward to eighteen more. Happy Simming!