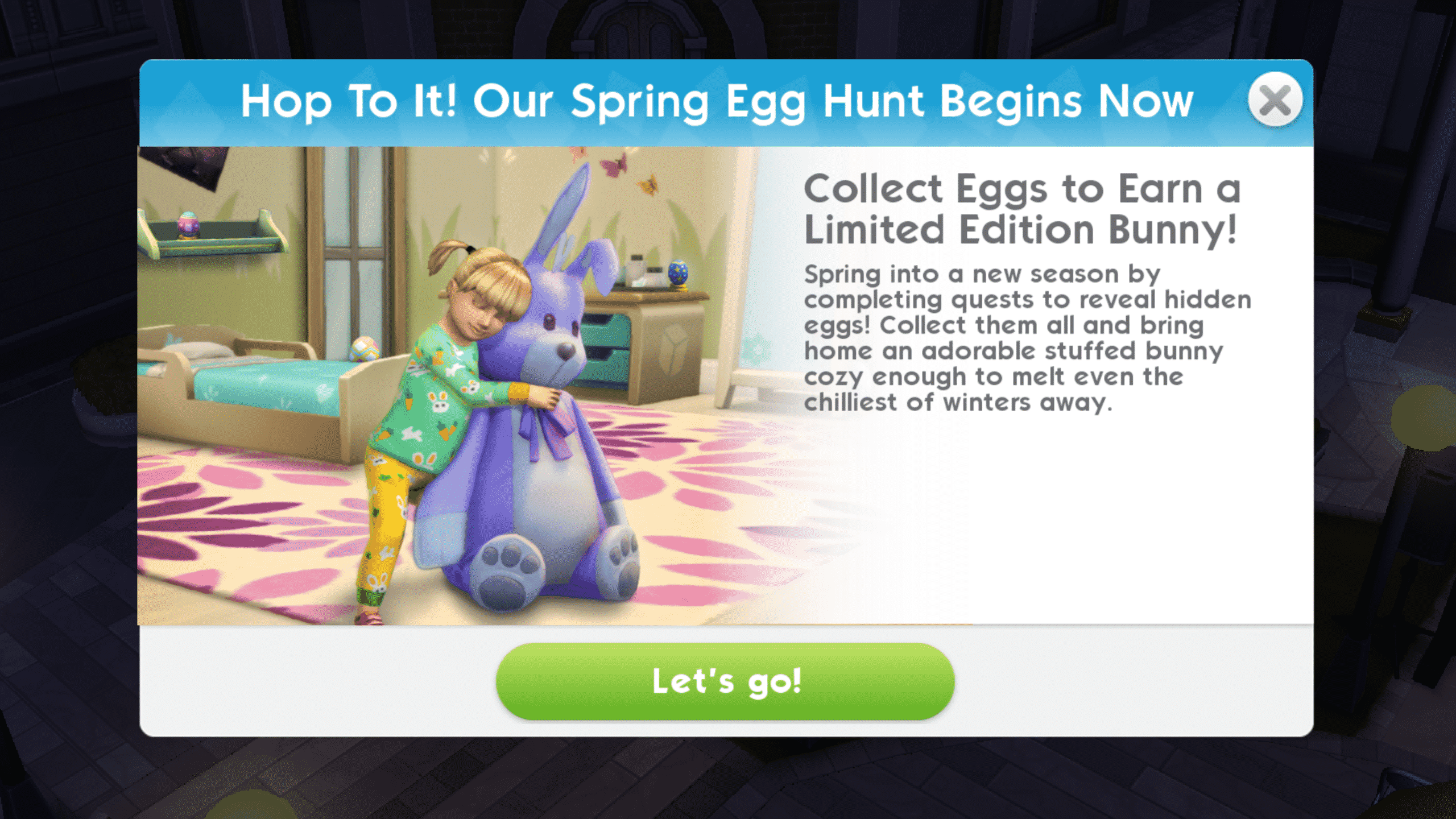 Spring is here in The Sims Mobile and we’re egg-cited to hop right into the game’s second worldwide event. Your Sims will be collecting spring eggs by doing a series of time limited quests. There are a total of 5 eggs to collect during this event. Collecting all 5 eggs and finishing the time limited quests will reward you with an adorable stuffed bunny for your little Sims to play with. 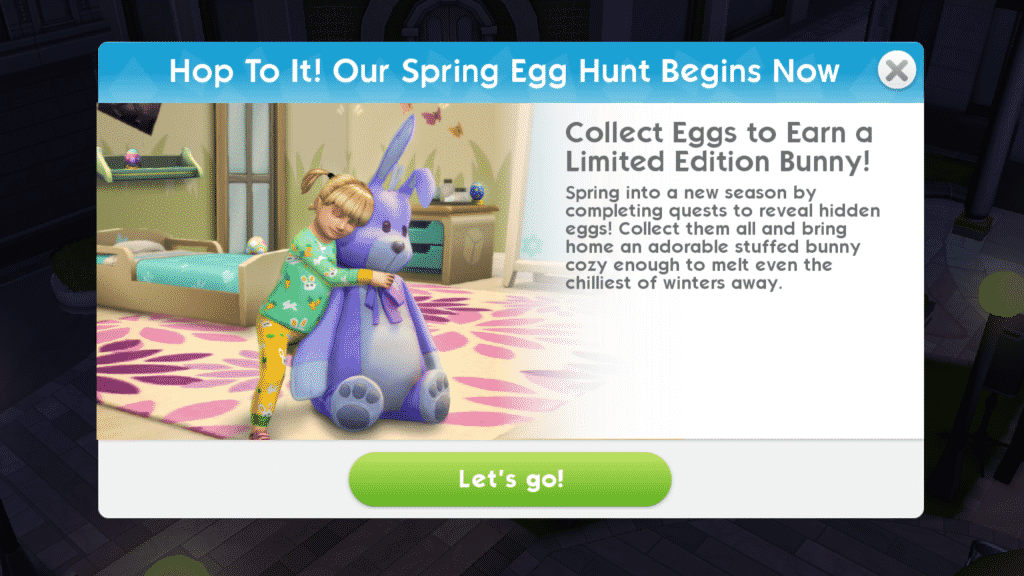 After updating your game, you’ll see some new quests available for your Sims to do. The first quest in your Quest Log will have a gold Limited Time ribbon above it. These quests with golden ribbons on top of them are event quests. You should focus almost exclusively on these limited time events during quests because as the ribbon says; they’re only here for a limited time. Once the event ends, those quests and their rewards will be gone for good.

Your first event quest will officially kick off the spring egg hunt by rewarding your Sims with their very own shelf to display their eggs on. It’s an easy quest, too. Just tap on your Sim’s couch and select Search for Shelf. If your Sims don’t have a couch, purchase one in the Home Catalog.

To place your Sims’ new shelf, open the Home Catalog and go to your household inventory. Select the shelf out of the inventory and drag it out to place it on any wall where there is space available. Be careful not to place the shelf below another wall decoration or you won’t be able to place your eggs on it. 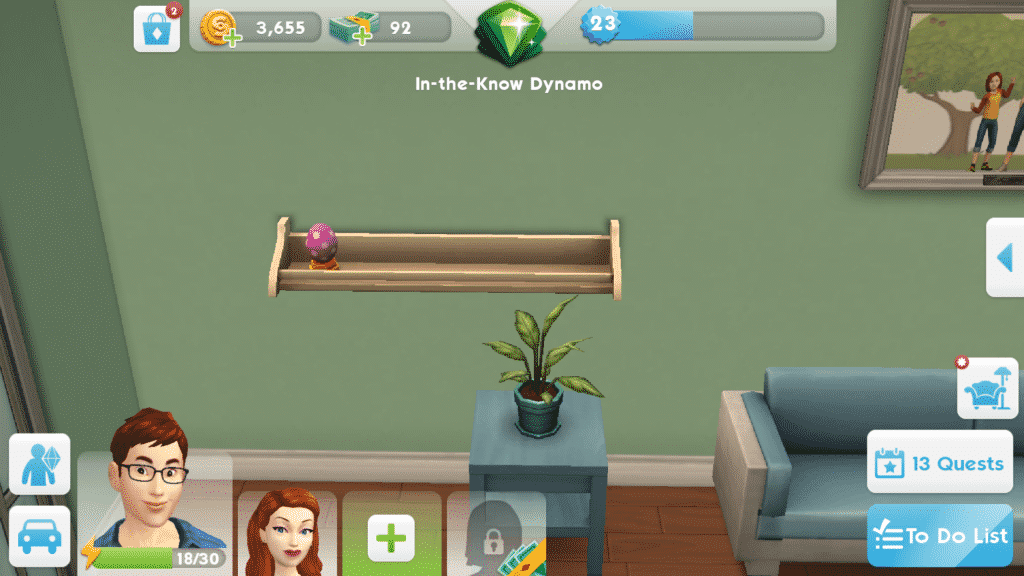 Unlike the hot tub event, your Sims will earn their eggs by completing the quests, so success isn’t as random in this event. Even if you bought a lot of goody bags in the last event, there was still a chance you would not end up with a hot tub because the prizes in the bags were random. This doesn’t seem to be the case this time around. You earn eggs by completing quests so the more quests you complete during the event, the more eggs you will collect.

The quests start off fast and easy, like searching behind your couch or attending a party, but eventually increase in time and difficulty. Luckily, many of these quests make use of things you’d likely already be doing in the game every day, anyway, like completing relationship and career events and giving out stickers. This means participating in the egg hunt quests won’t throw you off your daily rhythm too much.

If you’re ever unsure of how to complete an event quest, tap the question mark on that quest for more information on how to complete it. Remember, make the event quests your main focus because they’re only here for a short time. Playing often and completing lots of quests will allow you to collect the most eggs. 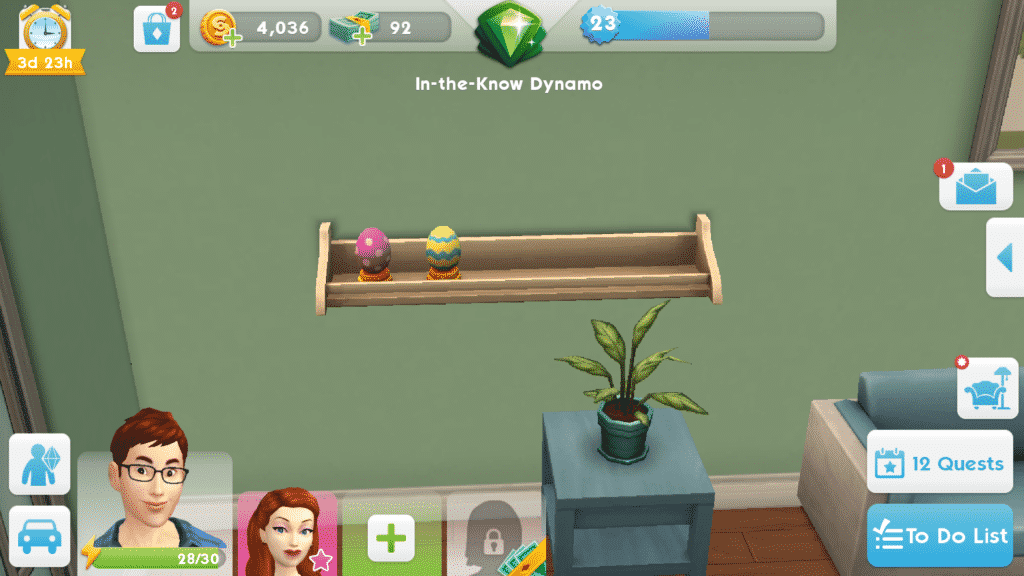 To display an egg on your shelf, open the Home Catalog and go to your household inventory. Drag the egg out of the inventory and place it on any of the blue highlighted spaces on the shelf.

How many eggs have your Sims collected so far?