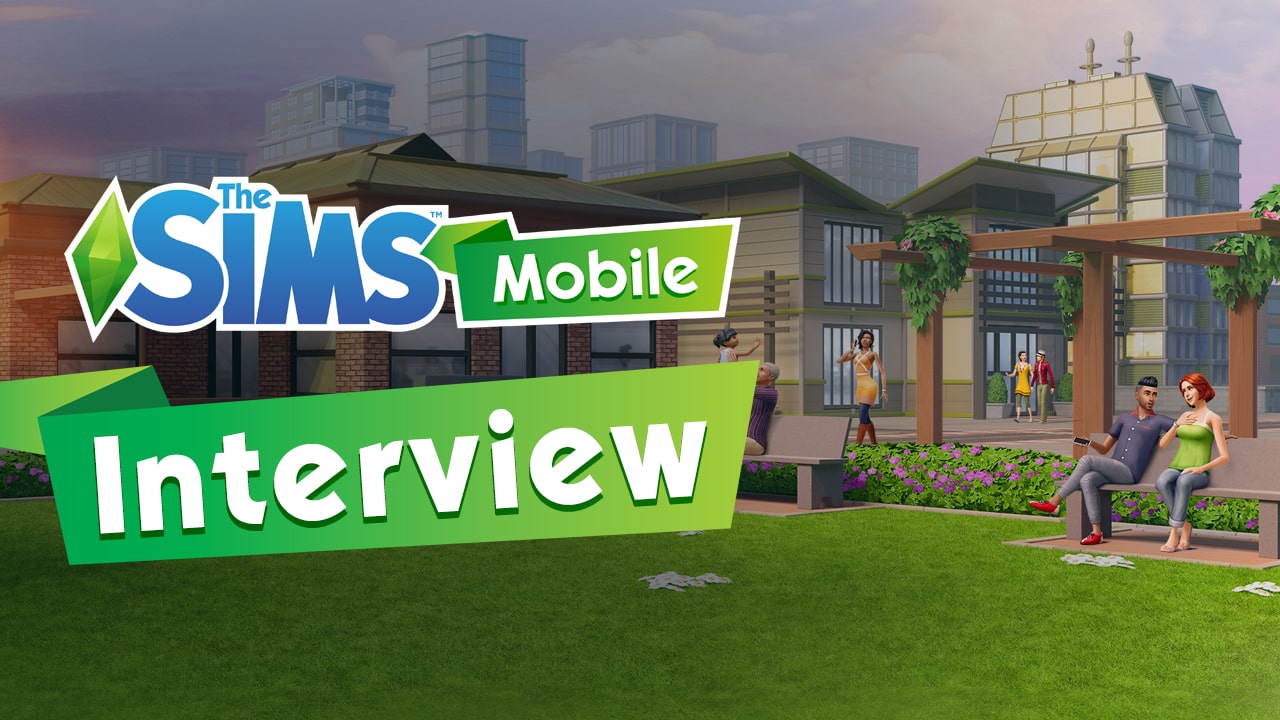 We interviewed Brittany Henry (also known as SimGuruBritt on Twitter) – the Lead Producer of The Sims Mobile. In case you’re not familiar with her work, she’s also been a SimGuru before during The Sims 3 days, where she worked on Expansion Packs for The Sims 3 at EA Salt Lake. 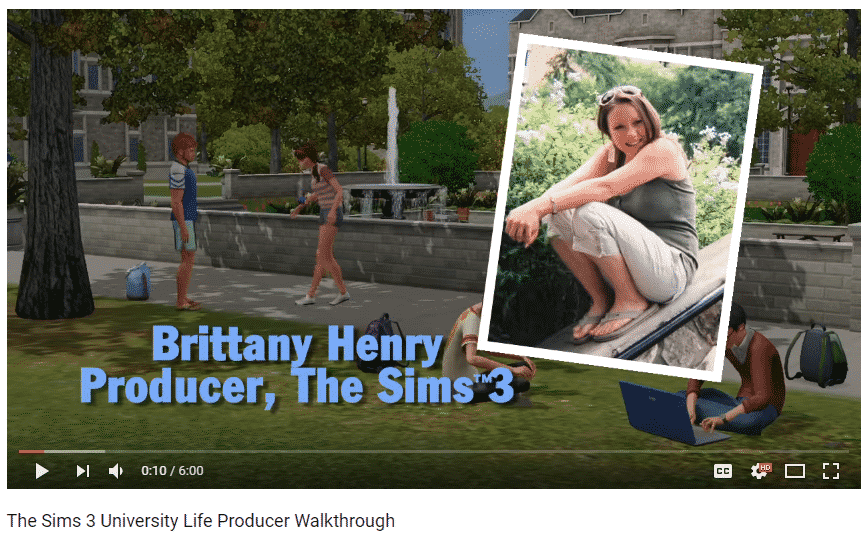 Now, Brittany is (publicly) back to talk about the latest Sims game she’s been working on! In the interview below we learn more about the past, the present and even the future of The Sims Mobile and its development. Check it out!

The Sims Mobile went through a very different, long process of releasing to players worldwide. What’s the difference between launching a PC game and launching a Mobile game?

BH: The community feedback! The amazing thing about making a mobile game is the ability we have to quickly react to our players. We form an idea, work on it, see how everyone reacts, and then make changes to make the experience better.

We saw plenty of things being added (and removed) throughout the soft launch period. What helped you determine what people liked and disliked about the game during that period?

BH: Oh man, we used every avenue we could think of to help us make decisions during soft launch! We ran surveys, held focus groups, did Q&A with some of our Game Changers, read feedback on the Internet… We observed how players interacted with different features and activities in the game. And of course, we played constantly and asked ourselves what we as players would enjoy. That led to some hard decisions, but I’m really proud of where the game is now.

For example, the aspect of death was present in The Sims Mobile for some time but was removed during the development process.

What was the decision behind adding nostalgic but unique soundtrack from The Sims 2 to The Sims Mobile?

BH: For this question, I went straight to our Audio Director, Robi Kauker. Robi is the driving force behind all of our amazing audio content. Here’s his take on it: “Funny thing is that we started with The Sims 4 music… [but] the intimacy of the game play wanted something different than The Sims 3 or 4 full orchestra sounds. Art direction always feeds into it, certain music clicks with certain art styles. Silas Hite, the composer, really made it unique for The Sims Mobile, the influence of The Sims 2 music is there, but you’d be surprised by how much The Sims 3 and 4 music plays into it as well… it’s a great legacy to be a part of.”

Is there anything The Sims Mobile team who previously worked on PC games have learned about mobile gaming throughout the soft launch period?

BH: Mobile moves fast! We would take an idea, brainstorm it, and within a couple days have a basic experience in the game that we can all play and react to. The changes to Sim aging are a good example of this. Once we knew automatic aging wasn’t working, we quickly had the basics of the new day rewards screen in game and could immediately tell that it was a much better experience to build on.

What inspired you to add Izzy’s Fashion Shop?

BH: The Sims has always been about customization; that’s what makes it so special. We wanted to play with customization even more, and make something where players could create clothing that is totally unique to show off their style at parties. When we first brainstormed the idea of a clothing shop, we knew we wanted a quirky character. (It was originally a much less cool guy called “Professor Bobbins”, lol.) Our amazing art team ran with the idea and Izzy was born! 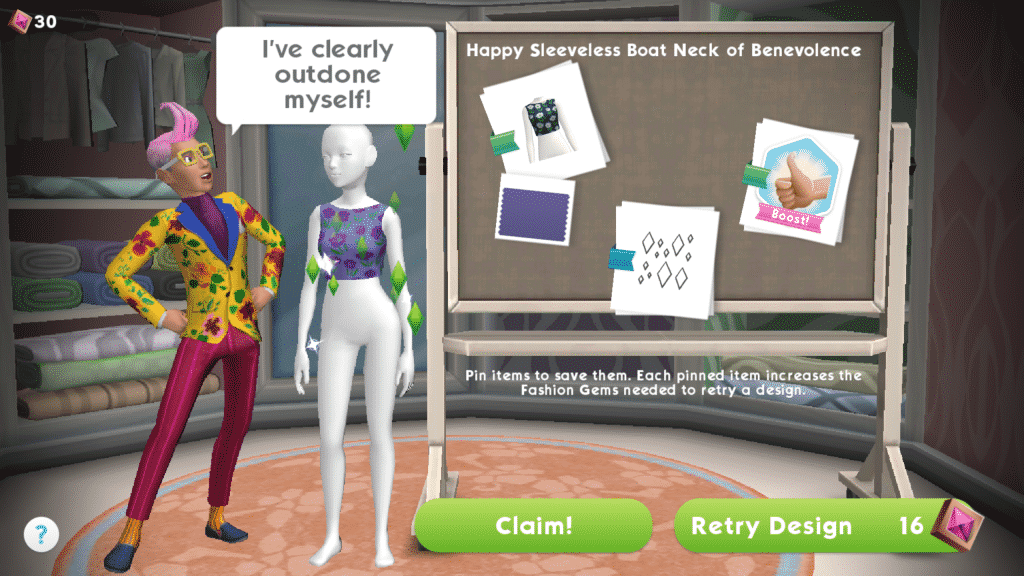 We love progressing through stories and unlocking story items. What inspired you to add them during the soft launch period?

BH: I’m so glad you like them! SimGuruMiriam does most of the writing, and I absolutely love her work. At some point during soft launch, we realized that we had been focusing so hard on the mechanics of the game that we had left behind the humor and quirkiness that we all love about The Sims. What we had was just that – a mechanical experience with little narrative. Stories were one of the ways to start adding that emotional connection back into the game. Our first brainstorm was insane – I think we had almost 100 ideas for crazy stories we could tell. Once Miriam started writing, it was pretty clear that something special was happening, and we are excited to keep adding great stories.

The Sims Mobile had a really successful launch week. Does that mean that we can expect plenty of new and exciting things in the future?

BH: I’ll just say THANK YOU to all of our players for making launch week so awesome. And that other than other than the occasional cupcake break, we are definitely not resting over here 🙂

The Sims Mobile reached over 10 million downloads on Google Play in less than 3 weeks!

Plenty of Simmers are currently experiencing issues where they’re unable to play the game due to getting the “incompatible device” message even though they meet all the basic requirements and can play games that are much more demanding than The Sims Mobile.

Can we expect The Sims Mobile to be updated and released for new android devices in the near future?

BH: We are always working on making the experience better, faster, stronger. We want as many people as possible to be able to enjoy the game.

What are some of the team’s favorite features in the game?

BH: I think we all have our personal favorites, but stickers, parties, and stories are definitely hot topics of conversation in the office. As I’m typing this, we’re in the middle of the hot tub event, and those that have the hot tub are bragging, while those of us who don’t are jealous and grumbling.

BH: Thank you, thank you, THANK YOU to everyone who is playing, reviewing, streaming, tweeting, and blogging. Your excited comments make our day. In the end, it’s all about you, and we hope to keep meeting and (hopefully) exceeding your high expectations.

The Sims Mobile is now available for download for both iOS and Android devices. You can get it HERE!