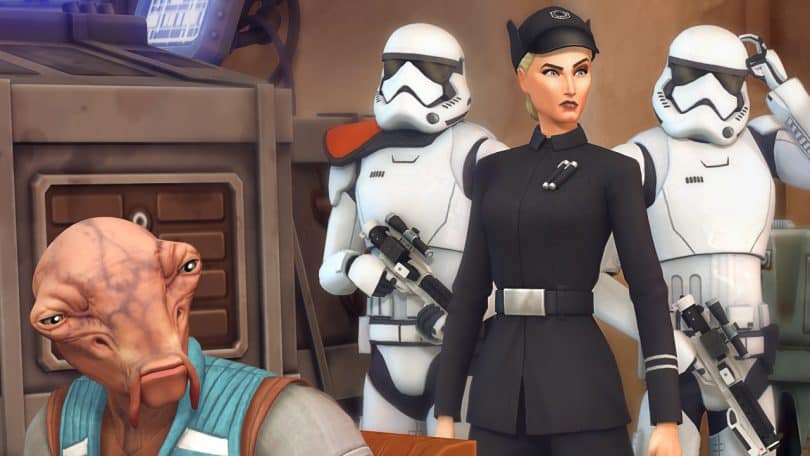 With yesterday’s announcement of The Sims 4’s biggest collaboration yet – the Star Wars: Journey to Batuu Game Pack, the community was surprised by this collab decision…both for the good and the bad. Surely there are plenty of Star Wars fans who never played The Sims 4 before and were intrigued by pack, but there’s also a core player base of The Sims 4 who didn’t like the decision to fill in the next Game Pack slot with a Star Wars universe…whether they’re also Star Wars fans or not.

It’s not every day that you see two fictional universes come together and merge into one paid DLC content and so Simmers had a lot to say regarding this upcoming pack. We asked folks over on Twitter what they think about this pack collaboration and here are some of the replies we’ve picked out:

To further explain it, I’d be just as disappointed if Realm of Magic was a Harry Potter crossover pack. But it wasn’t, because RoM is its own thing, as Sims in general has always been. Crossover universes just don’t fit in the Sims. It’s weird and wonky and alienates players.

I love it. As a huge Star Wars fan I was hoping for more Star Wars content in the game since 2015 and was building my own environments etc to play my own Star Wars stories.. Now I finally have the items and locations to do so

I’m not sure. I don’t need SW in my game, but could find ways to enjoy it. On the other hand I’m definitely not going to pay the full price for a GP I don’t need – esp. with all the bugs new features always bring to the game. So I’ll wait for LPs and first players’ experiences.

I love story packs, i literally can’t wait to play it. This is coming from someone that doesn’t care at all about Star wars, maybe this pack will interest me in the franchise?

I’m not a SW fan and haven’t even watched the movies, so not interested. But I’m happy the gurus got to do something different, especially @SimGuruNinja (who we know loves sw 👀). I think the majority of the anger in the responses stem from being tired of not beeing heard by EA

I love Star Wars. I love The Sims. But here’s the thing, I love chicken and waffles. But I tried them together and hated it. So far, this game pack gives that same feel for me…

Finally, I can make my Simself marry Rey without needing custom content!!!!

I’m happy for the people that love Star Wars and are excited for this pack. personally, though, as someone who doesn’t care about SW, I’m disappointed. I would’ve preferred legitimately anything else. 🤷🏼

I loved it but couldn’t help to think: We’re getting the Millenium falcon before cars ????

Honestly I don’t think I have ever been so happy to see this. I’ve been a star Wars geek since I was 8 and will be preordering ASAP.

I really like Star Wars but it seems so out of place for The Sims 4. Never have I played and thought…hm I need this family man to go fight The Resistance and become a jedi. Idk. I think the clothes look rad.

Wait! Does this mean MY SIM CAN BE A JEDI OR A SITH??!

I’ll probably play it once, use the items in a build and never touch it again. I bet the alien sims will appear in other worlds. Build/buy items like dining tables, bars etc will look out of place in the catalogue. It just doesn’t make sense in the Sims 4 but that’s my opinion

I’m super annoyed…if I wanted to play Star Wars I would play one of the millions of other Star Wars games there already are.

I honestly love it! I am a HUGE StarWars fan and to be able to make myself actually be a Jedi without mods in really amazing! I really hate how people say “we have StarWars clothing in base game, we don’t need anything else”. You don’t have to like it, but don’t be negative!

I really hope that we get a really expansive CAS with all of the new species, with the correct color, markings, horns etc. schemes as that’s a huge part of the diversity of the SW universe

I think it’s just unneeded at the moment, the community are annoyed abt Skin tones, bugs etc and there are plenty of holes in the gameplay that could’ve been filled with something we’ve been asking for. Star Wars is cool but really not needed in the sims (imo) just doesn’t fit.

Happy for the people who wanted this. Personally I would rather have had a pure The Sims alien GP. They could have expanded on the Sixam universe and the connection to StangerVille and the Mother, and a connection to old and new Sims lore would have been wonderful!

What are your first impressions on the upcoming Game Pack? Let us know in the comments!