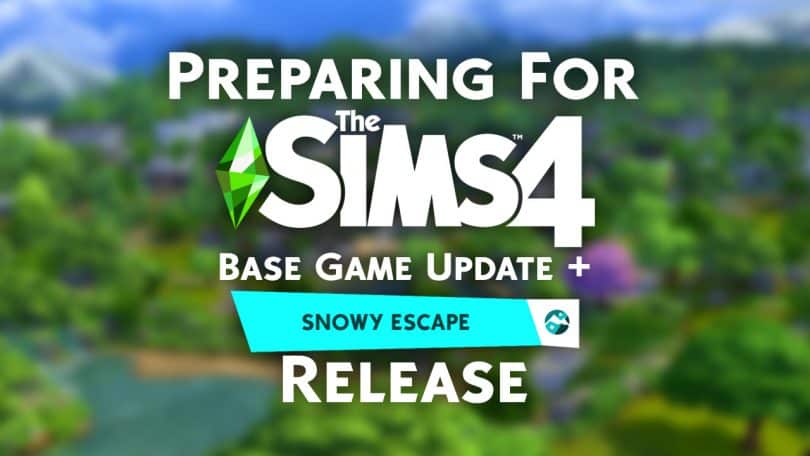 Next week is going to be a big one for The Sims 4!

First off we have a huge update coming for The Sims 4 Base Game on PC / Mac and Consoles. The update is set to release on November 10th (expected time of the release is around 10AM Pacific Time) and should bring some new features to the game such as Platforms, Sentiments and more.

The next big release is The Sims 4 Snowy Escape Expansion Pack, which happens just 3 days after the big update on November 13th. The release schedule for this Expansion Pack will be staggered across different areas and platforms. Don’t worry though – we have a countdown post covering all the zones and their exact release times!

The Sims 4 Base Game Update

The next Base Game Update is bringing a lot of new features to the table including:

We’ve covered all of the new additions in our overview video that you can check out below!

According to the official blog post released by EA the update is set to release on November 10th. Considering that the update is very heavy on new Build Mode features and Gameplay changes, it’s very possible that some of the current mods that add something to Build Mode, Worlds and Sim Gameplay will likely break.

Make sure that you keep track of all the updates and information coming from your favorite CC and Mod creators to ensure that there are new versions of Mods coming. Although that the game will automatically disable all CC and Mods the first time you open The Sims 4 after updating, it’s best advised that you don’t re-enable the Mods until mod creators confirm that their mods are safe / will be getting a compatibility update soon. Enabling your Mods / CC without assuring that they’ll work with the new Sims 4 version might break your game.

If, however, you want to test out your current Mods / CC and see how they’re working with the latest update I advise you to make a backup of your current save game folder (located in Documents > Electronic Arts > The Sims 4).

The Sims 4’s 10th Expansion Pack – Snowy Escape, is set to release on November 13th across PC, Mac, Steam, PS4 and Xbox One – as well as the next-gen consoles PS5 and Xbox Series X. To find out exactly when’s the new pack coming out CLICK HERE!

The Sims 4 Snowy Escape, just like some of the previous Sims 4 Packs, will only work on 64bit systems and won’t be supported by The Sims 4 Legacy Edition.

To ensure that you’ll be able to play the game properly make sure you check these things:

For all information on the release of The Sims 4 Base Game Update and Snowy Escape Expansion Pack stay tuned on Sims Community!