With the release of The Sims 4 Dream Home Decorator, I can’t be the only one who immediately started thinking of which townies need the most help with their homes. After all, EA’s builds aren’t so much famous as infamous for their total lack of style. That means there is no shortage of terrible-looking Sims with terrible-looking homes in need of a professional decorator’s touch.

Here’s my top 10 list of townies whose homes need the most help. 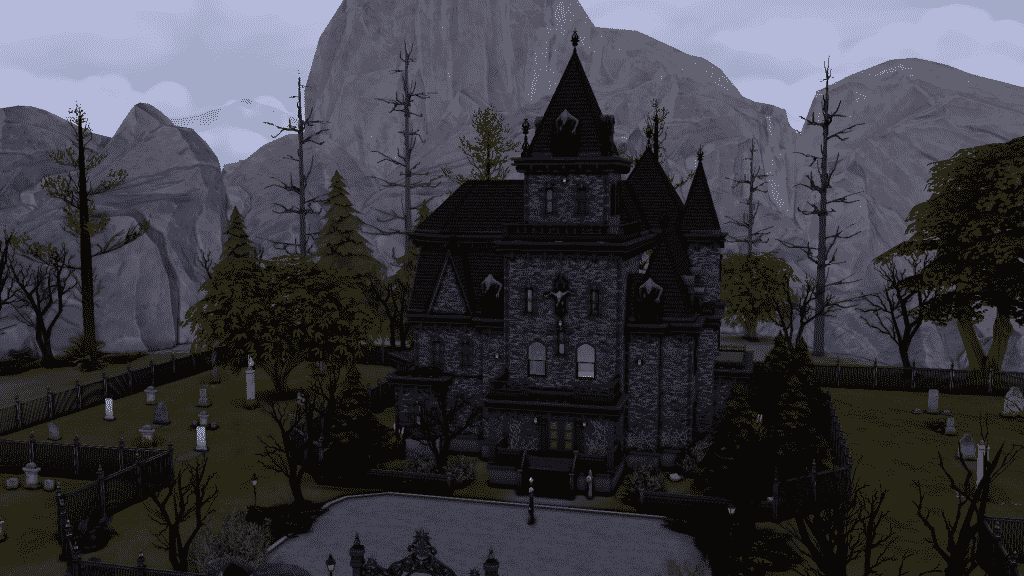 Oh Vlad. Vlad, Vlad, Vlad… Your house had so much potential. That Gothic Victorian exterior architecture is to die for. What happened on the inside? A confusing, awkward floor plan with triangular corners and little hallways that lead nowhere make this house look more like a theme park’s haunted fun house than an actual vampire’s lair. Not to mention there’s no access to one of the turrets that definitely looks like it should have access to it, considering it has an archway to the covered balcony and storage boxes in it. Why, Vlad? Still, at least this house is fully furnished and decorated, which is more than what some others can say. 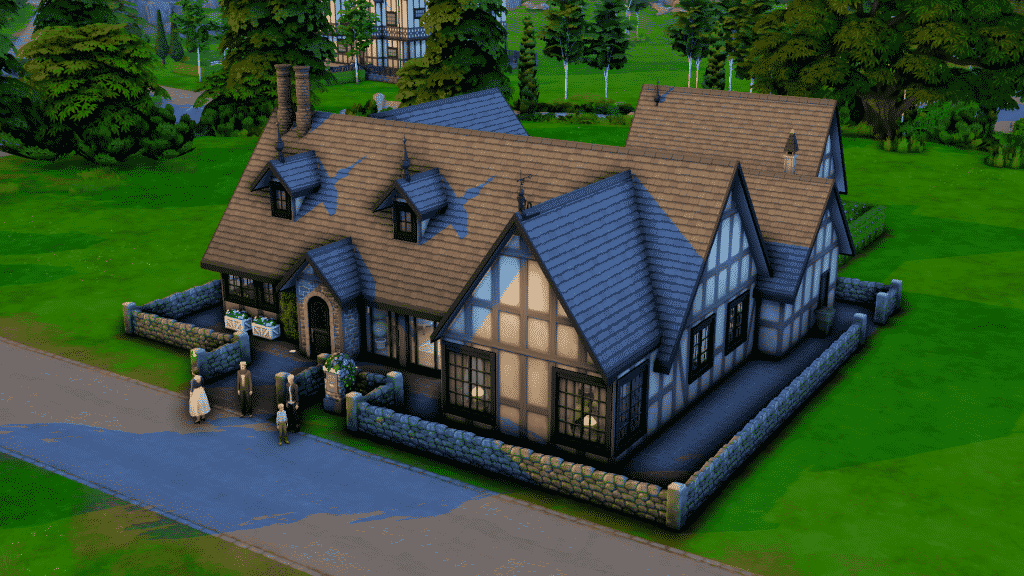 I don’t know about you, but I don’t consider a winding hallway with a bunch of rooms tacked on willy-nilly a house. This place looks like someone slapped down a bunch of styled rooms and just connected them all with a long, zig-zagging hallway that honestly feels intimidating. I’d be worried about a murderer jumping out at me from one of those long corridor doors. The detached shed in the backyard had potential to be a really cool hangout space but it really just looks sad and uninviting. 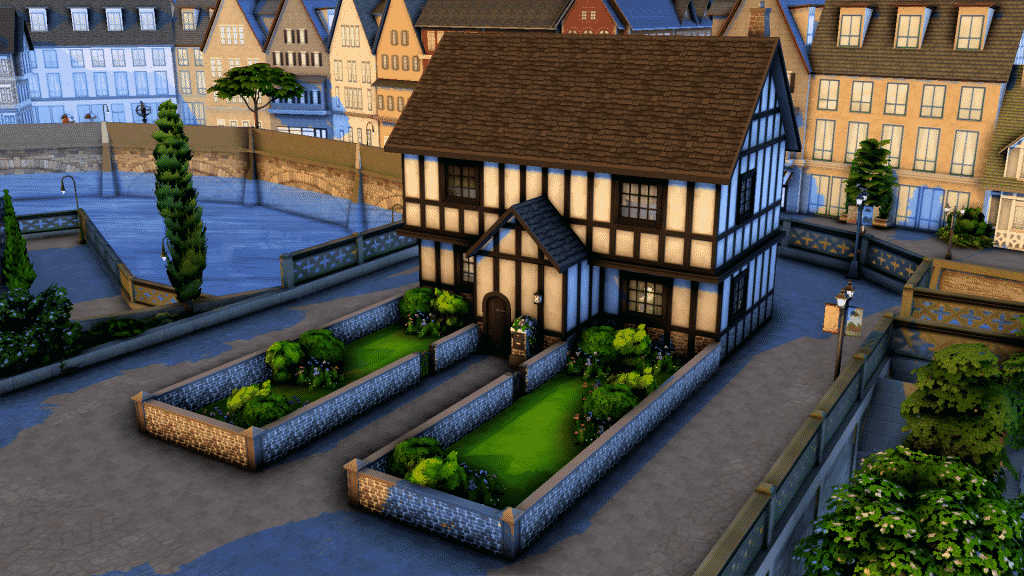 Windenburg has some pretty cool houses. This house is not one of them. While I appreciate the little nods to MySims with the DJ Candy figurine in Candy’s room and the Yuki figurine in Yuki’s room, this house is a drab mess. From the bare kitchen with hideous blue tile and a random bunny statue on the counter to the hobbled together living room with a huge DJ booth shoved in the corner, nothing about this house makes any sense. And the placement of the front door makes my eye twitch. 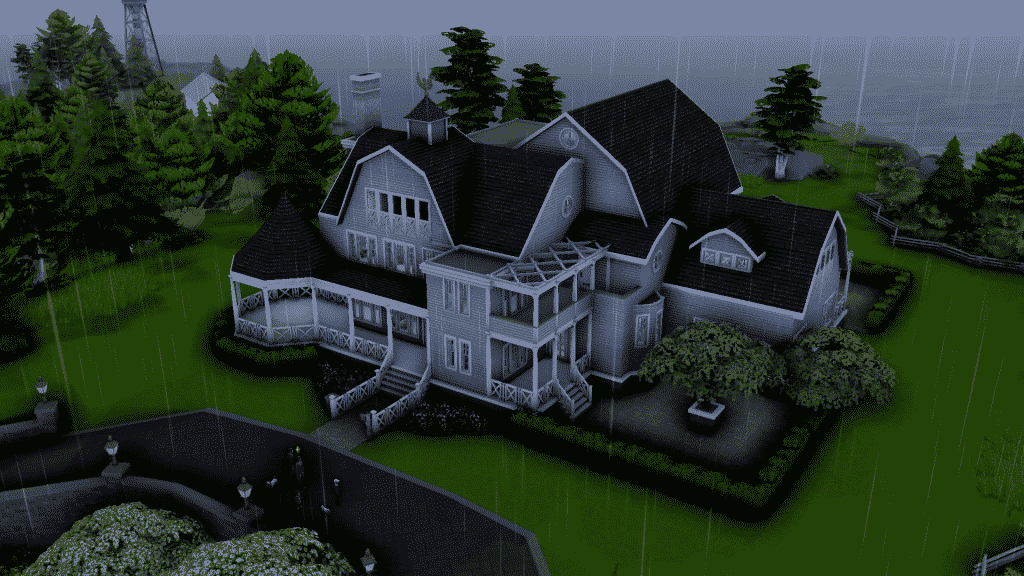 This house is a prime example of a home with a beautiful exterior and no effort whatsoever put into the interior. For such a massive seaside home, there’s only the barest minimum of furnishings inside, making the rooms feel empty. Even the gorgeous wraparound porch and back pool patio are just not being used for anything at all. There’s fencing inside to try and section off different areas of the open floor plan but it just looks amateurish and awkward. Not to mention all the white! Everything is just blindingly white with no contrast anywhere which makes for a very bland, sterile look in what’s supposed to be a cozy and warm family home. 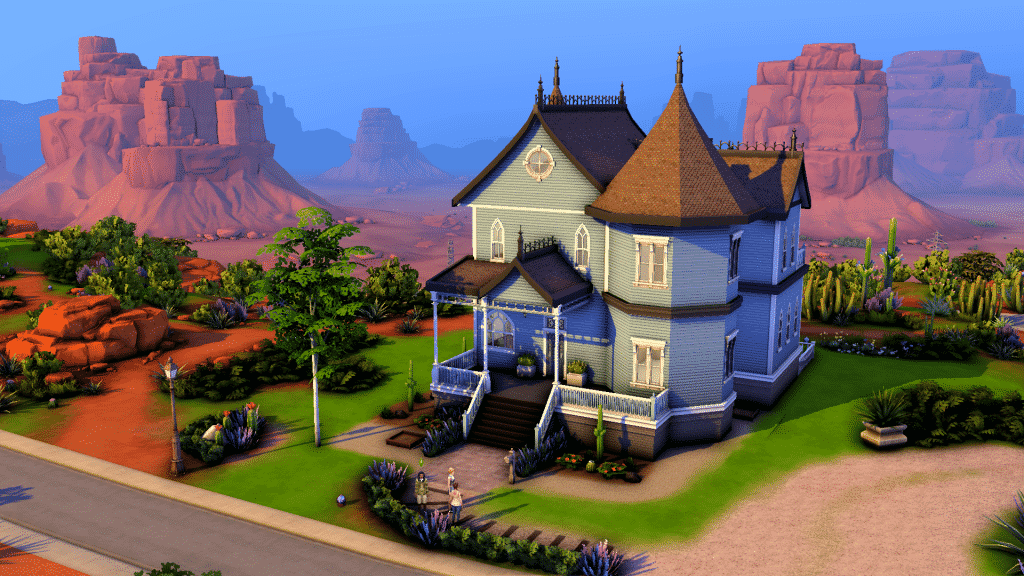 I don’t even know what to say. Where do I start? Do this hapless group of roommates know what furniture is? Do they own any? There’s maybe 2 or 3 objects in any one room, making this entire home not so much a house as some walls and a roof with a few objects scattered around. If I didn’t know better, I’d think this house had been abandoned and then broken into multiple times by petty thieves looking for stuff to pawn. 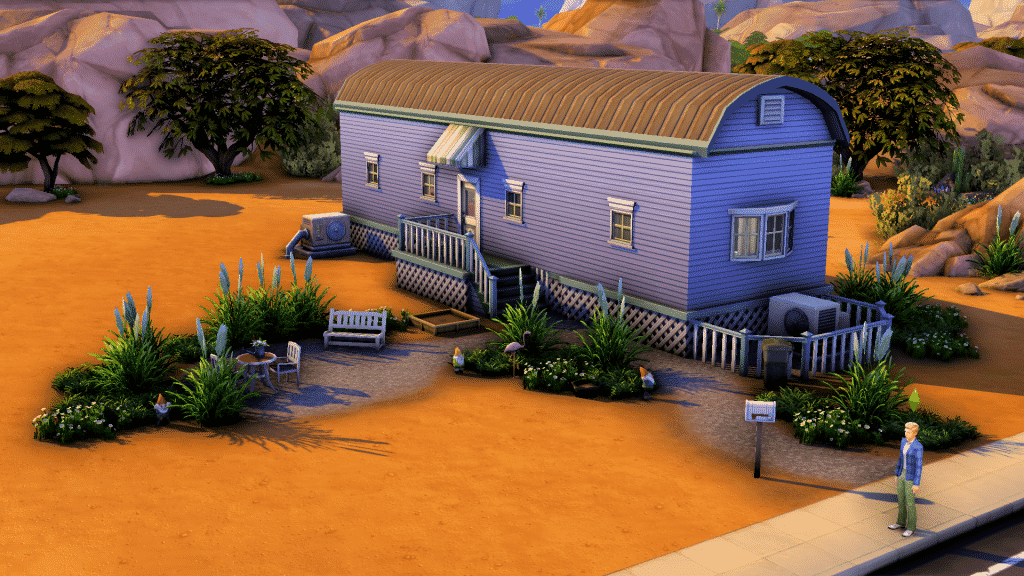 We’ll cut Johnny a bit of slack. After all, he’s been struggling since his family kicked him out and his trailer is actually kind of cute from the outside in a ramshackle sort of way. I appreciate the cute little patio area and attempt at a garden but poor Johnny really needs some help with the inside, which is dark and dingy and doesn’t make good use of the limited space. Not to mention he has multiple decor styles clashing with each other. Why is there an ornate candelabra next to what looks like a thrift store couch and cheap IKEA tables? Please Johnny. Let us help you. 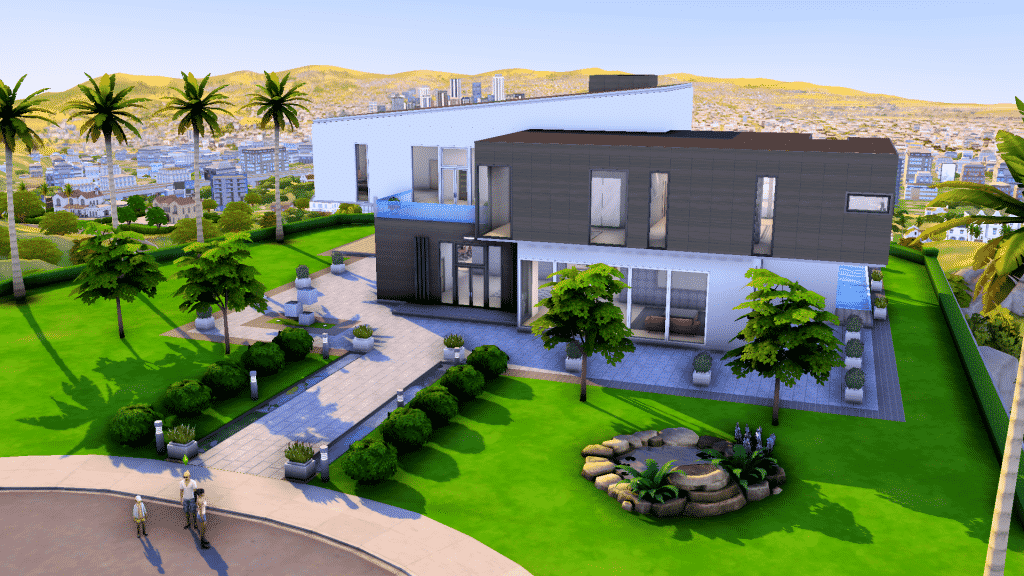 This house is just as confusing on the inside as it is on the outside. I understand the modern look they were trying to go for here but the whole structure just looks unbalanced. I’d be worried about the whole thing collapsing if this was real life. Then the inside is just a bizarre mish mosh of basic-looking furnishings and high-end furnishings that makes you scratch your head. For a famous, wealthy family like the Bailey-Moons, you’d think they’d be able to afford a good interior designer who understands how to make a room flow. 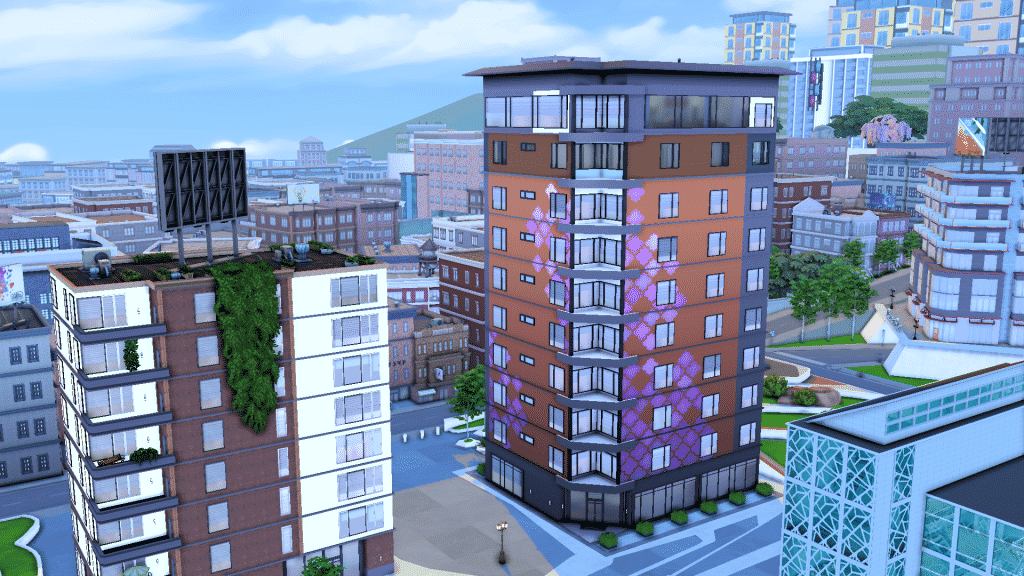 If you ever wondered what the worst bachelor pad on earth looks like, you’ve found it. Welcome to Salim Benali’s shoe box– I mean, apartment. The lot trait “Needs TLC” is one heck of an understatement. From the peeling walls to the stained carpet and dingy linoleum with beat-up appliances and a flea market couch that looks like it has a happy family of roaches living in it… yeah, this place needs to be completely gutted. Take it from one writer to another, Salim: the environment you write in makes a huge difference in your productivity. Maybe invest in some home upgrades for the sake of your career. Or sanity. 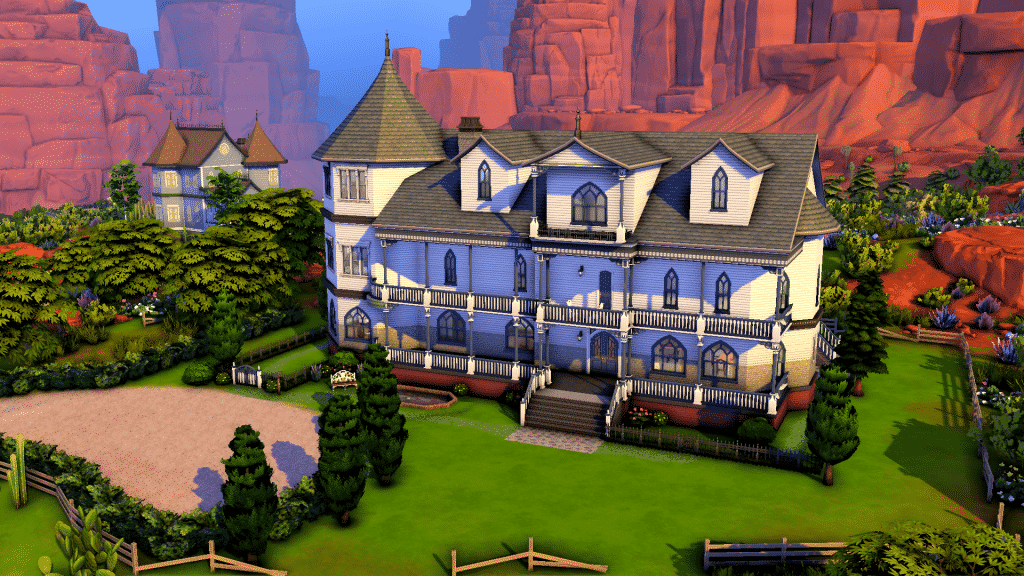 I’m sensing a pattern in StrangerVille and that pattern is that the residents don’t like furniture. Ted Roswell is supposed to be the wealthiest man in StrangerVille and the mayor of the town so why does his home look like whatever was left over after an estate sale? Another example of a huge home with a beautiful exterior but vast, empty rooms with only the bare minimum furnishings necessary to function. Someone please give this mayor and his wife a home upgrade fitting of a wealthy mayor. 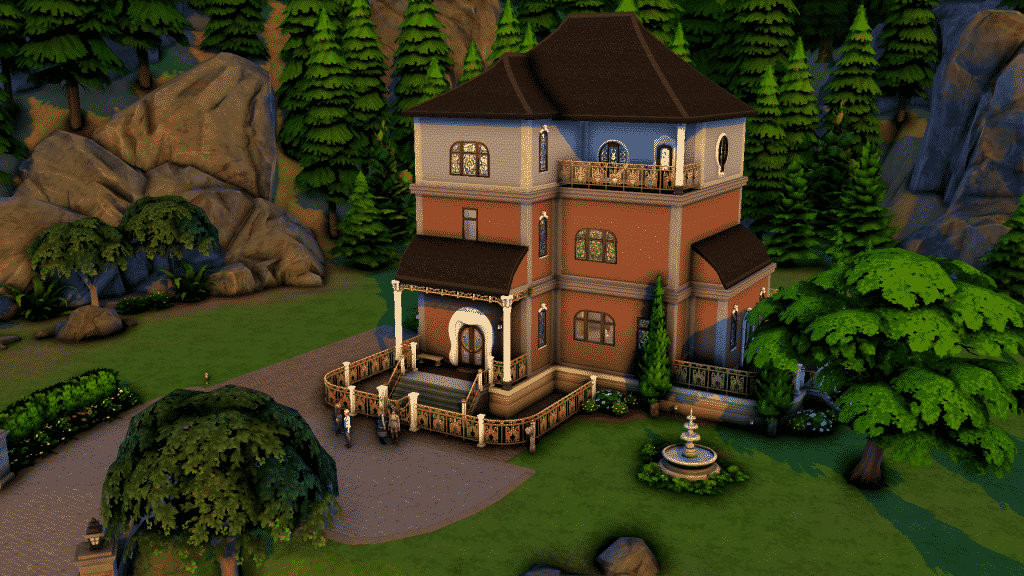 The Charms could not have placed anywhere other than first on this list. This atrocity is by far the most appalling abomination ever to be inhabited by a premade Sim. Unlike the other sparsely furnished homes on this list, the outside of this home is just as big of a mess as the inside. I don’t even know what architectural style this is supposed to be. It looks like something I would have built and been very proud of when I was ten years old playing the original Sims. The inside is pretty much just as bad as the Roswell home, with large rooms that have only one or two basic objects plopped in them at random. Like the Roswells, the Charms are supposed to be a very influential family of high standing in Glimmerbrook but their house doesn’t reflect that at all.

You know what to do, Interior Decorators! Seek out these poor unfortunate souls and improve their lives by improving their drab, sad homes! Are you outraged that I missed a particular family? Not happy with my rankings? Drag me in the comments! ;)