I see the same question pop up in our Sims Community Facebook group all the time. “HELP! I want to start a new save but I don’t have any ideas for what to do! What are some good story ideas?”

People usually suggest the same handful of things like do this or that challenge, get a spouse then cheat on them, become a black widow, use mods to incorporate R-rated content and all these are fine. If they sound fun to you, then by all means, do that! It’s your game. It should be fun to you first and foremost before anything else.

But if you’re a little bored of these things, I highly recommend this fantastic Plot Generator by Reedsy. It has over 1 million different plot combinations, complete with a protagonist, a secondary character, and a plot twist to shake up your story! Just pick your genre and hit Generate and boom! You have a totally unique story that probably no Simmer has ever done before right in front of you!

Keep in mind this plot generator is designed for writers, not The Sims, so you will probably end up with a lot of suggested plots that aren’t exactly specific to anything in The Sims. This is where your own imagination and creativity comes in. Think about how you can make that story work in The Sims, even if in a more abstract or unconventional way. For example, a Simmer received the following prompt from the generator and asked me how on earth they were supposed to do that in The Sims: 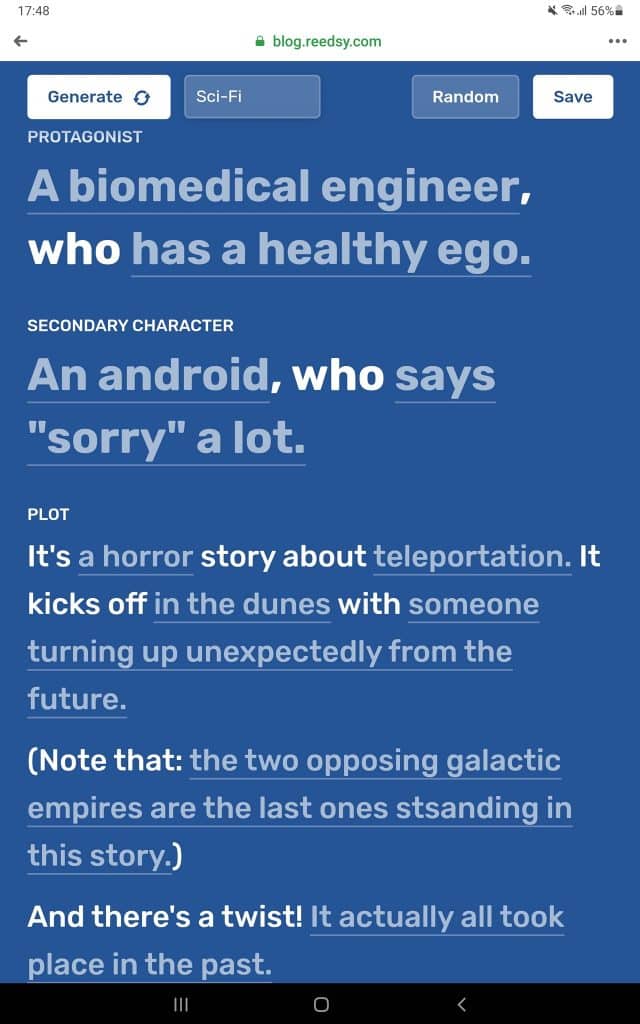 I suggested a mechanical engineer with the self-absorbed trait and a servo. The servo turns up from the future and, in an effort to return them to the future before the opposing galactic empire seizes it, they learn to transportalate as a spellcaster which allows them to travel between timelines as well as locations. When they arrive in the “future,” the engineer is horrified to discover that the future is actually less advanced than their time. The opposing empires clashed and created a new dark age that lasts well into our present day and the servo is one of the last of its kind.

See? You can do anything in The Sims if you stretch your imagination a little. That’s what it’s all about. Thinking outside the given parameters of the game.

If you’re looking to take this a step further and turn it into a challenge, I wrote a very simple one with deliberately loose rules to allow you more freedom to tell the stories you’re given.