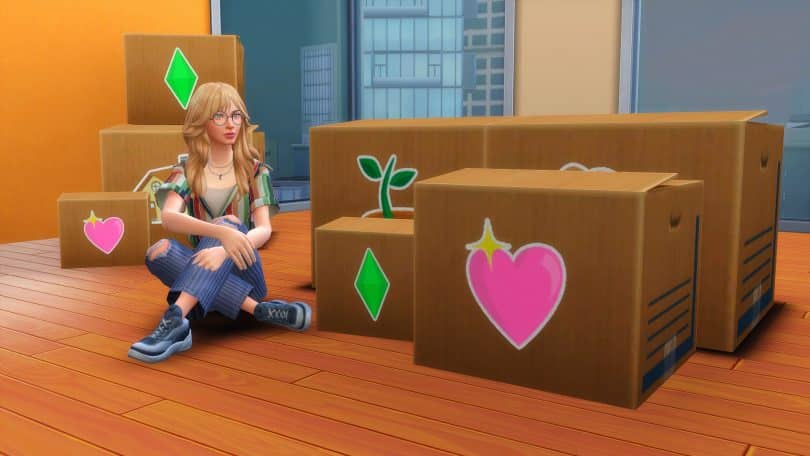 First things first when moving to San Myshuno is choosing which District my Sim is going to live in? Living in the Fashion District makes sense, however is slightly expensive to a degree to rent in. The Spice District is appealing, but isn’t quite what my Sim is looking for at the moment, and the apartments in the Arts District and Uptown are definitely out of budget for the time being.

After some consideration, I settled on moving into one of the apartments in 21 Chic Street in the Fashion District.

So it’s goodbye for now, Henford-on-Bagley and hello San Myshuno! 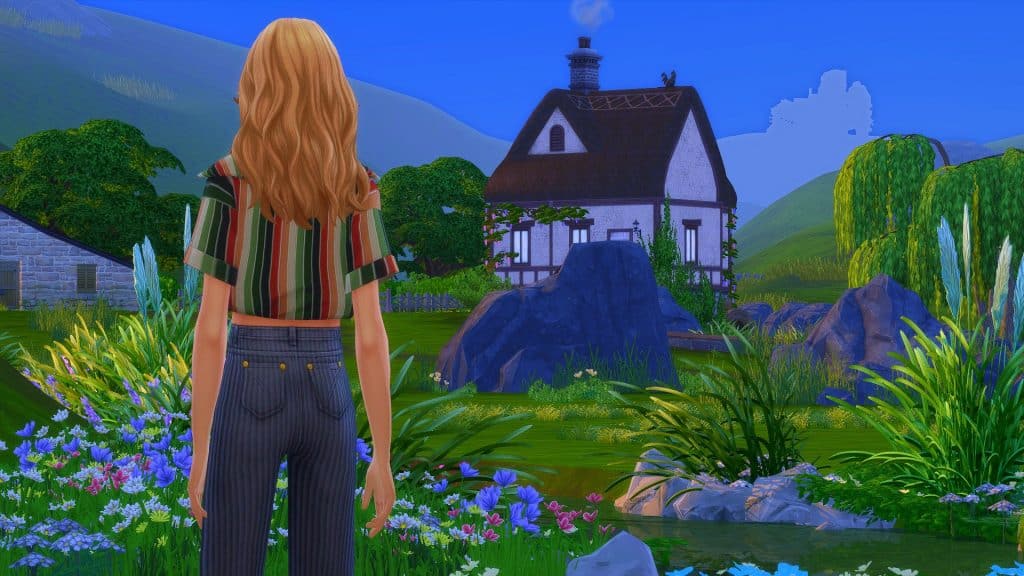 After selling the furniture from my Sims previous home as well, it left my Sim with quite a sizeable amount of money. I say sizeable, it was enough to renovate her new apartment nicely and still have some left over while she makes a start in San Myshuno.

While the apartment I chose isn’t the biggest available in San Myshuno, for the weekly rent it was spacious enough for my Sim. For those who have played The Sims 4 City Living and know the pack well, the apartment I have chosen is the one where you would usually find Penny Pizzazz. 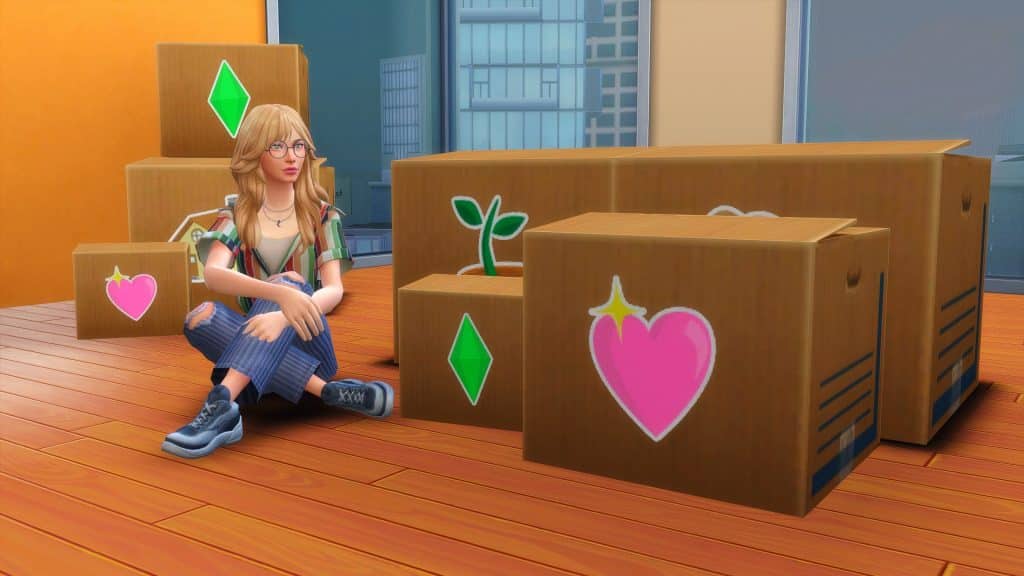 The original layout of the apartment used the main space as a big open-plan living room, office and bedroom, while I wanted to keep the similar idea I was trying to think of ways I could keep this while making each area its own. Not only that, I was wondering what kind of theme I wanted to go for. Did I want something colourful, an industrial feel, or maybe just having something minimalistic?

Here are a couple of screenshots of how the apartment looked before I started renovating the apartment. Plenty of space to work with. The only thing I didn’t screenshot was the bathroom, which is just to the right and out of shot of the first screenshot below.

After setting about renovating the apartment, I initially decided to go with a minimalistic theme. I soon found that it just wasn’t working out how I had imagined it to. After quickly deleting what I had done, I ended up going with a mix of modern and industrial, with pops of colour throughout. As I continued to place each of the items, I found that overall it turned into a mash-up of different themes in the end, but I was loving how it was all coming together. Of course, I couldn’t forget about adding clutter throughout as well, where I could.

I also added a platform into the open sleep/living area, and even though it was just something really simple, I felt helped break the room up a little more. I’ve not really used platforms at all since they were added into the game as I found they would glitch easily, and while I still have the odd problem here and there it worked perfectly on this build.

Now for the after screenshots!

First up is the entrance to the apartment and main living area, followed by the office space. While I did want to try and create a better working area for my Sim for when she is working from home, it did prove difficult with the amount of space I had. Even though it didn’t work out as planned, I did like how it turned out. 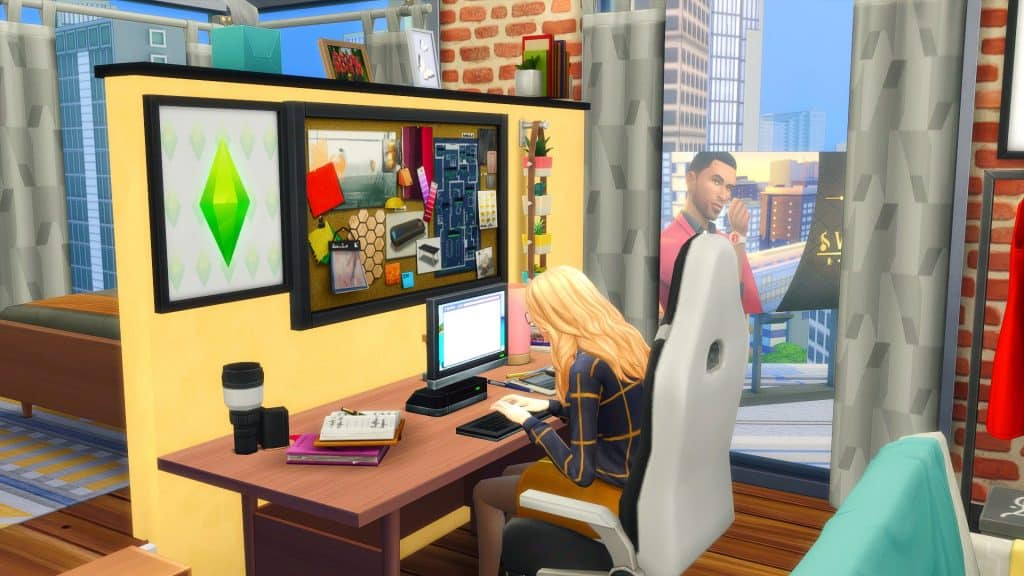 The bedroom space I wanted to keep nice and simple, with not too much clutter about. I did add the Trend Board in the bedroom as it was the only place that I could find enough space to place it while there still being enough space for my Sim to move around.

And lastly, the kitchen and dining space. I usually start with the kitchen regardless of what I’m building, but this time around it was actually the last room I renovated. I found it hard to find the right colour scheme that worked but adding the little pop of yellow really helped in the end.

Before anyone mentions that I have forgotten the bathroom, I did renovate it, but it’s so tiny that I just place the bare essentials that my Sim would need in there. While I did try to take screenshots to show what I had done, it was so difficult to get one that would show everything.

I really loved how this came together. There were plenty of challenges along the way, as well as trying to figure out which packs and objects worked well with one another. There are one or two areas that I’m considering changing, but overall I’m loving it. The perfect apartment for an up and coming Style Influence. I honestly can’t remember the last time I played in San Myshuno, but I’m excited to jump back into my main game and see what happens with my Sim as she starts her first steps as a Rag Reviewer!

Look out San Myshuno, the next big thing in the fashion world is coming!

Want to get the hairstyle from the Sim in the screenshots? It’s a part of the “so casual” CC Maxis Match collection by arethabee, and you can get it HERE!