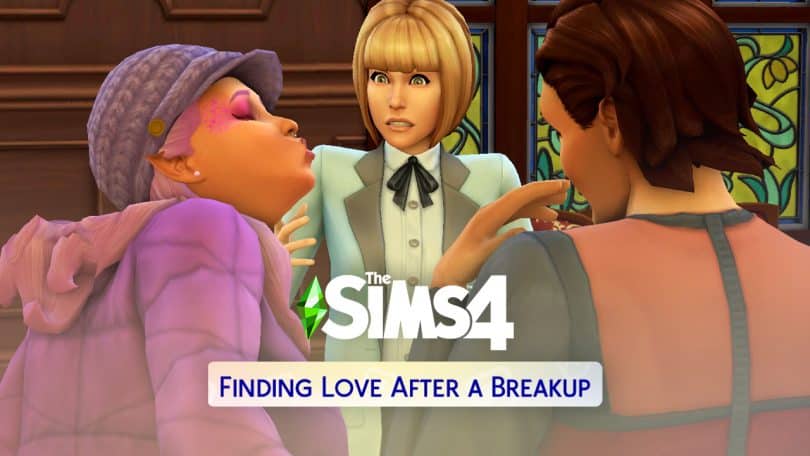 In case you missed it, The Sims 4 got a pretty big feature update today! The game now has a brand new Scenarios feature where your Sims can work towards completing specific challenge goals in exchange for satisfaction points to spend in the Rewards Store. I was personally quite excited about this new feature, being a storytelling and challenge enthusiast. I was pleased to see how open-ended the scenarios were. Even though I had a goal to strive towards, the way I achieved those goals was completely up to me.

Today, I’ll be sharing my experience playing through the Finding Love After a Breakup scenario! I’ll also be explaining how to start and work towards the goals of this challenge scenario. 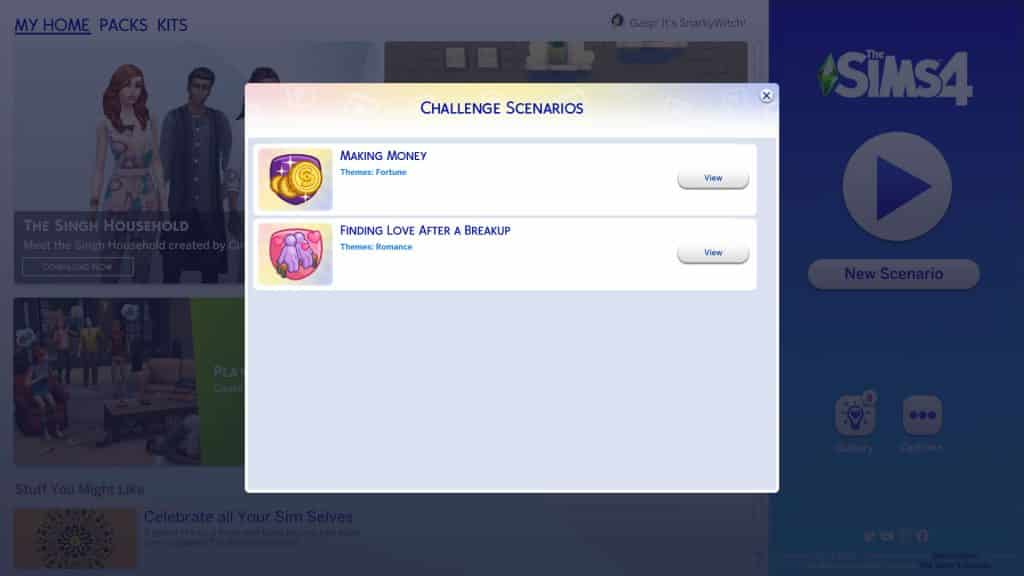 When you first start up the game, you’ll see a new Scenarios option in the right sidebar. Click it to see a list of available scenarios! Currently, there are only two scenarios available but more will be added in the future so keep checking back for new scenarios to play! I went ahead and selected the Finding Love After a Breakup option. Currently, you will not be able to start a scenario with an existing household. You can only start a scenario with a new household but the Sim Gurus have said they will be implementing the ability to play scenarios in existing households in the future. 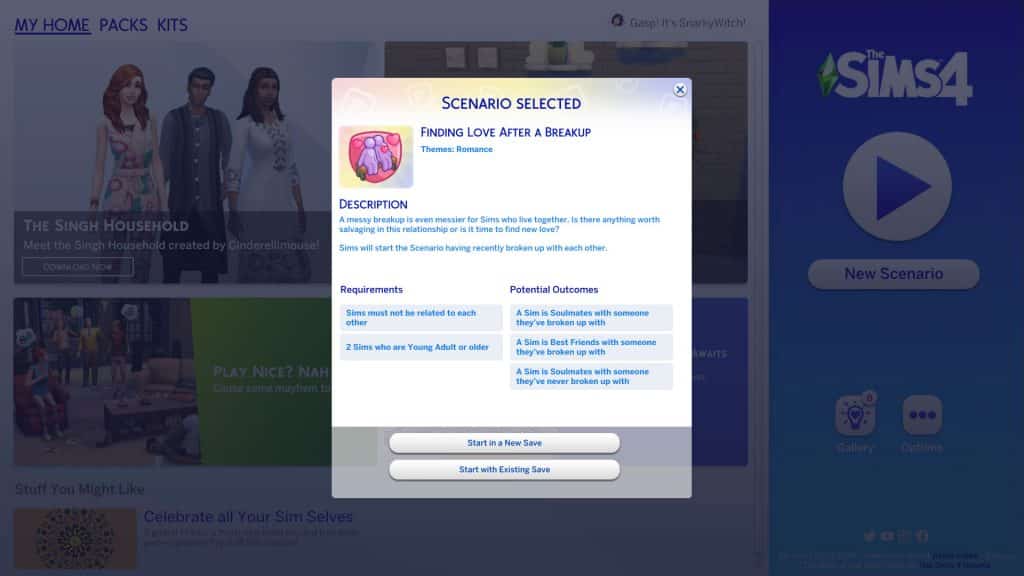 When you select your scenario, you’ll get a breakdown of potential scenario outcomes, the household requirements to play that scenario, and a description of the scenario circumstances. For this scenario, it explains that I’ll need to have two adult Sims who are not related to each other and that when I start the scenario, these two Sims will have recently broken up. I’ll be able to choose between three potential outcomes; I can rekindle the dead romance, have the two Sims stay broken up but become friends, or have one Sim move on with someone new.

I already had two Sims in my Gallery I’d made previously that I thought would work well for this scenario; a vampire named Xavier Nightbloom and a spellcaster named Serena Crowe. Both of these Sims have backstories involving being unlucky in love. If you’d like to play with Xavier or Serena, they are both CC free and in my Gallery under the ID SnarkyWitch!

When I first started the scenario, I immediately noticed the popup in the top left of the screen with the possible outcomes. I could work towards any one of these goals to complete the scenario. At first, I felt disappointed; I was hoping for more guidance or some kind of step-by-step thing. Something more like the StrangerVille mystery, I suppose. I wasn’t sure how exciting working towards these goals was going to be. I was proven wrong very quickly after I started playing!

When Xavier and Serena started out on the lot, they were both sad from their breakup. They also had a completely negative romance bar and a somewhat negative friendship bar. They also both had the Bitter About Breakup sentiment towards each other. As I started playing with them, I realised very quickly that achieving the goals of this challenge scenario wasn’t as straight-forward as I thought it was going to be. 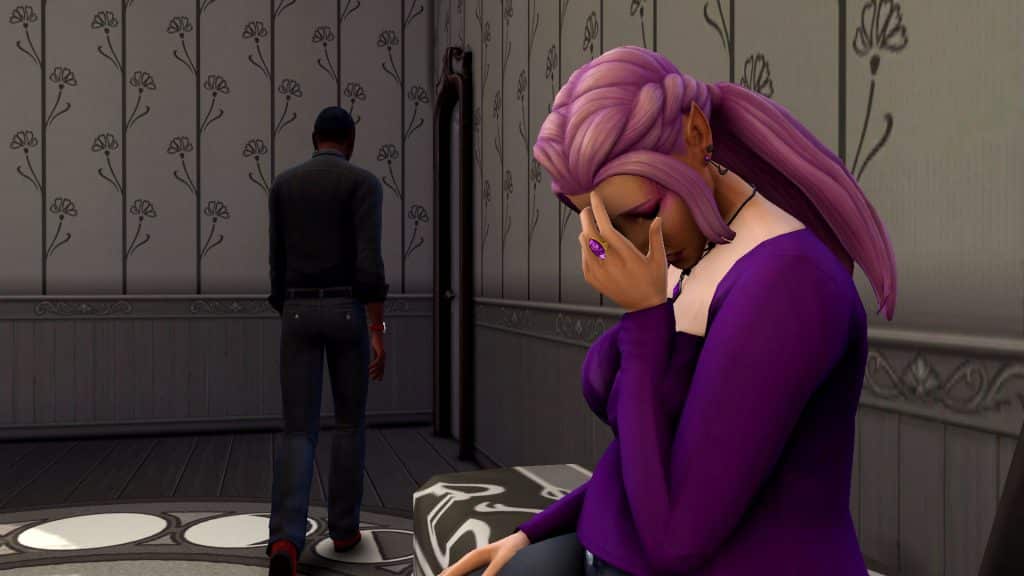 I initially planned to have Xavier and Serena rekindle their dead romance but Xavier and Serena made it very difficult to do that. So difficult, in fact, that I had to switch tactics and work towards one of the other goals, instead. No matter what they said to each other, no matter how many times they tried to apologise or discuss their problems, the conversation would always go sour and they’d end up fighting all over again. Their bitter sentiment towards each other, combined with their breakup moodlets and negative relationship bars made it virtually impossible for them to have a positive exchange with each other. Xavier even ended up with the Hurt sentiment towards Serena after she lost her temper with him and shouted at him autonomously. 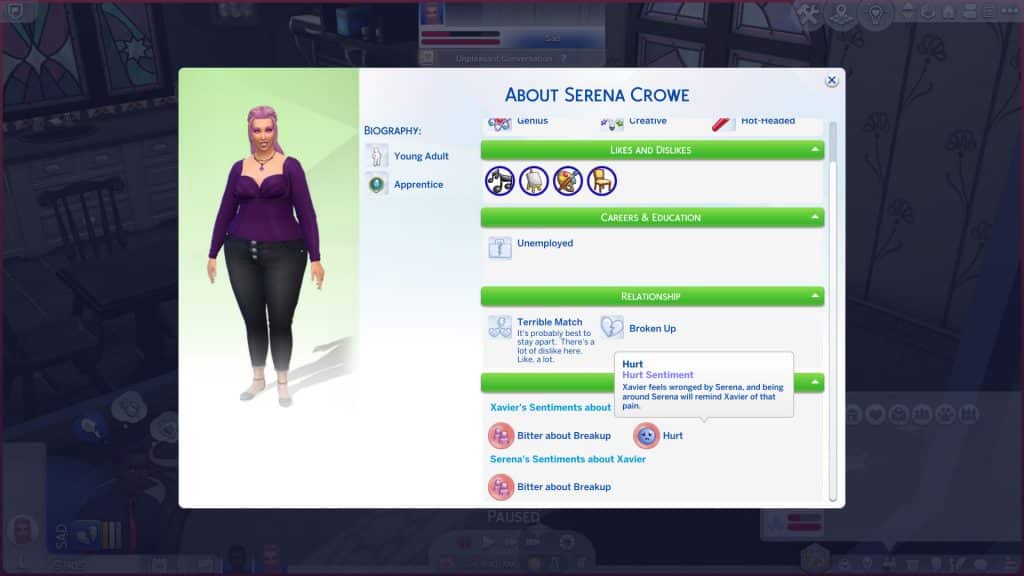 When the Welcome Wagon showed up to greet them, I was starting to think maybe this wasn’t going to work after all. Maybe getting to know the neighbours would allow me to complete the scenario a different way. So Serena and Xavier invited Minerva, Darrel, Grace, and Tomax into their home.

Since I was pretty sure falling in love with Xavier or becoming his friend weren’t going to happen, that left one option; falling in love with someone else. Luckily for Serena, she and Darrel Charm formed an instant connection. They had a lot more in common than she and Xavier did. They were both spellcasters and Xavier was a vampire. They came from completely different worlds and Serena was starting to see that the more she chatted with Darrel. Xavier definitely noticed how well his ex was getting along with a new guy right in front of him because he disappeared into the bedroom to sulk. 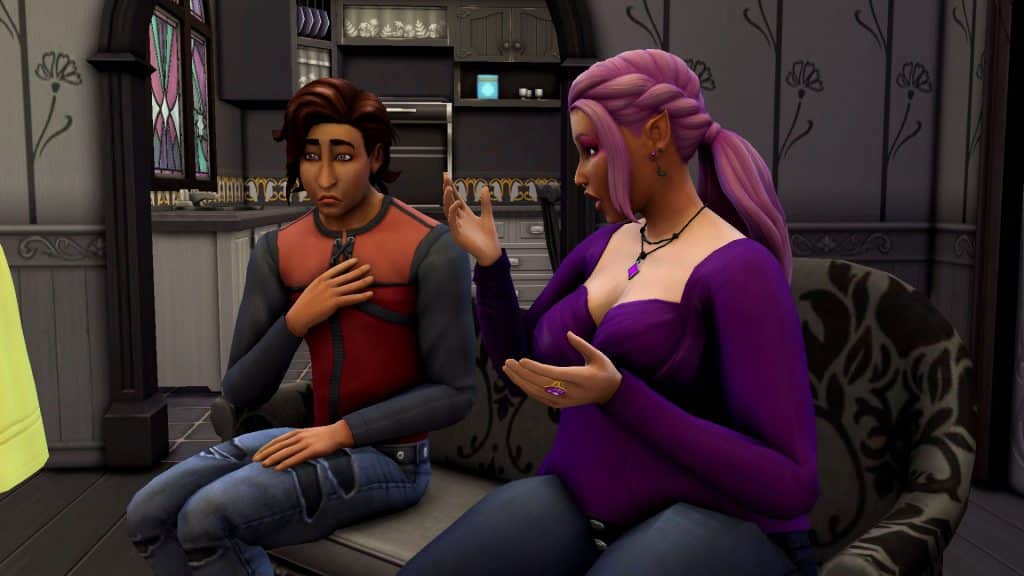 By the time the welcome wagon left, Serena had found out a lot about Darrel… including the fact that he was currently engaged to someone else but apparently, he didn’t feel that strongly about his fiancée because he had struck up a bit of romantic banter with Serena. Perhaps Darrel was also looking for a way out of a bad relationship. That would be one more thing he had in common with Serena, anyway. 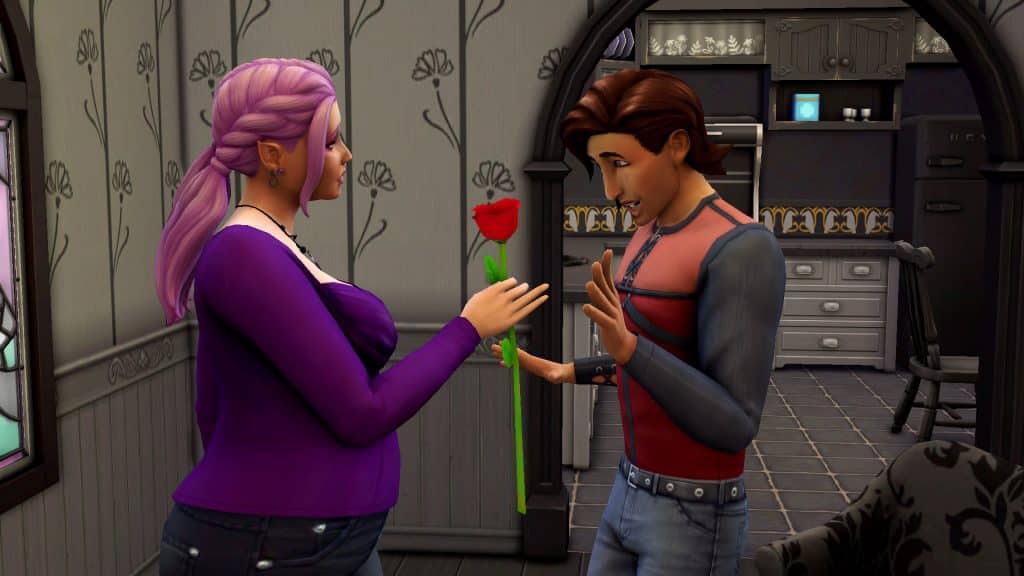 Serena and Darrel’s flirting did not improve the situation in the house. It made it ten times worse. Xavier was extremely upset that she would have the nerve to cozy up with another Sim right in front of him in his own house so soon after their breakup. Was she trying to be cruel and rub salt in the wound?! Serena didn’t see the problem; they were broken up, weren’t they? And she lived here, too. She could do what she wanted with who she wanted.

Things just got more and more tense until Xavier couldn’t take it anymore. He’d had enough of being yanked around by her. It was time for some payback. He was a vampire, he was hungry, and his ex had plenty of plasma. If she was going to play dirty after their breakup, then so was he. He hypnotized Serena and drank her plasma! Yikes! This living arrangement was getting more and more toxic by the second! 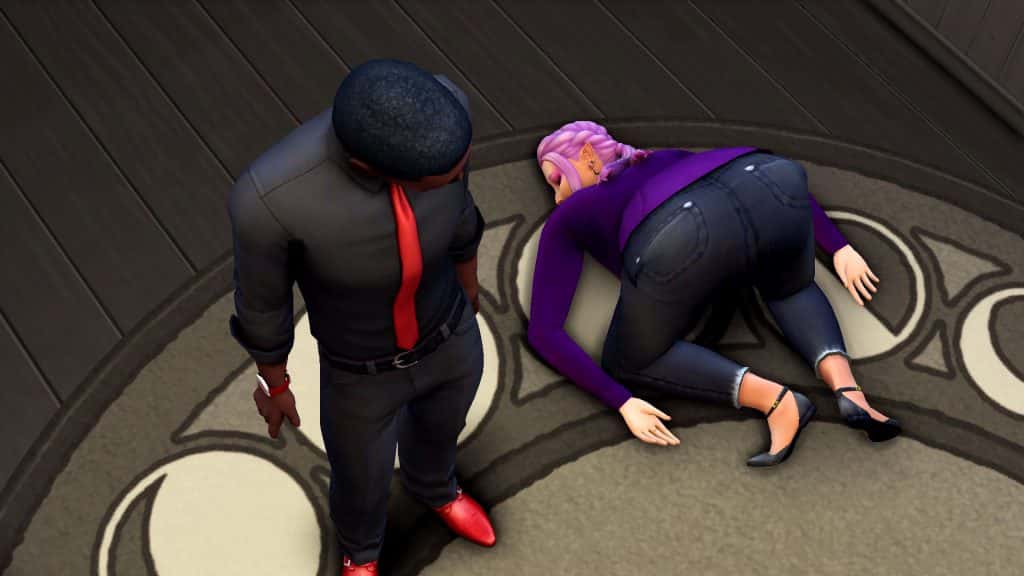 Serena knew she needed out and fast. It was bad enough living with her ex-boyfriend but living with her vampire ex-boyfriend who had no issues with feeding off her was the last straw! That’s just rude and completely unacceptable! So she left to go see her new love interest, Darrel, at his house. Darrel took pity on Serena and let her sleep and have a shower at his house after hearing all about what happened with her and her ex. At first, his fiancée, Emilia, was perfectly happy to help out a neighbour in need… until she realised her fiancé was being a little bit more than neighbourly with the girl next door. 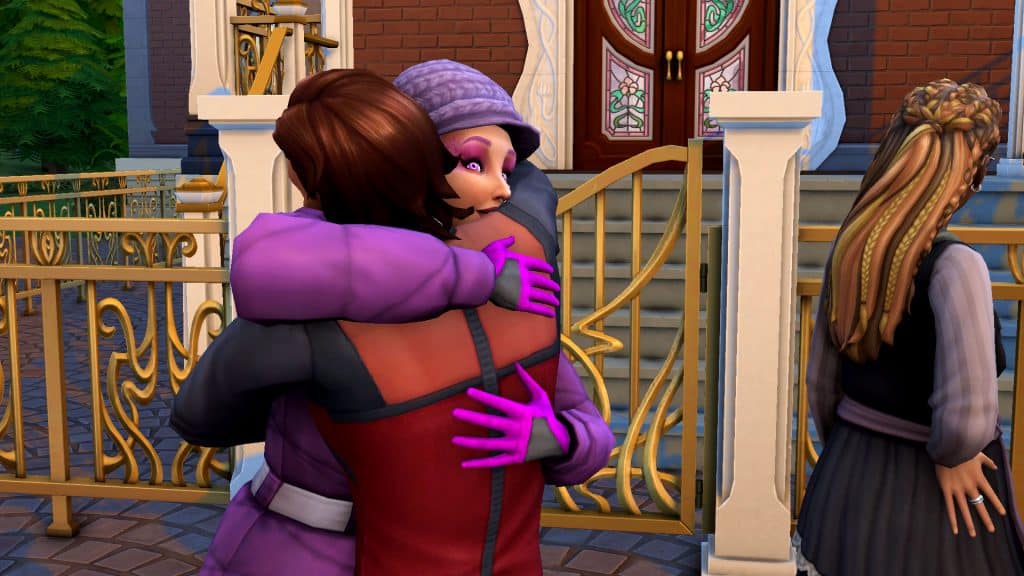 Emilia was, understandably, furious that the man she was about to marry had been snuggling up to some other spellcaster and started following Serena and Darrel around to harass them and yell at them. She made it so unbearable for Darrel and Serena to be in the house that they actually had to take a walk together around Glimmerbrook where no one would bother them in order to have a proper conversation. 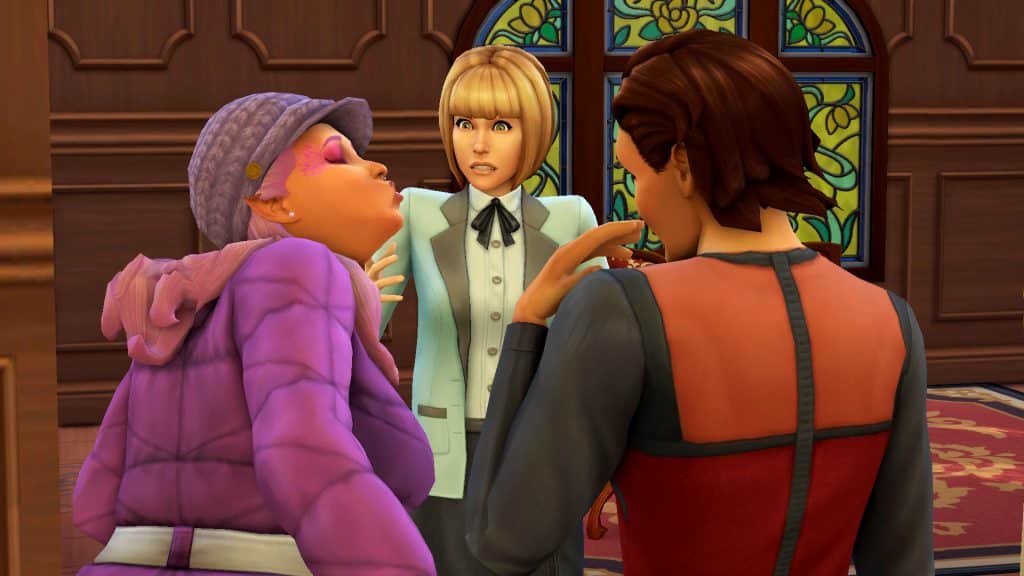 On their walk, finally free of other people intruding on them, they really bonded and opened up to each other about everything going on in their lives. It became clear to Serena that things with Xavier could never be mended and that Darrel was a better match for her. Darrel also realised that he’d been looking for an excuse to call off his wedding and leave Emilia for a while now and Serena had finally given him a reason to walk away. He told Serena he was going to leave Emilia for her and Serena promised she was done with Xavier once and for all.

They shared a very romantic kiss and that completed the scenario for me! Serena became Soulmates with someone new and was finally able to move on from her ex! When I completed the scenario, I got a popup of the scenario results, including which outcome I achieved and how long it took me to complete the scenario in Sim days. I was grinding to complete this scenario as fast as possible so it only took me 2 Sim days but I could easily see these events unfolding over a longer period of time if I had been balancing the scenario with work, school, hobbies or other aspects of the game. Xavier and Serena also received a hefty 5000 satisfaction points each for all the trouble they went through. Not bad! 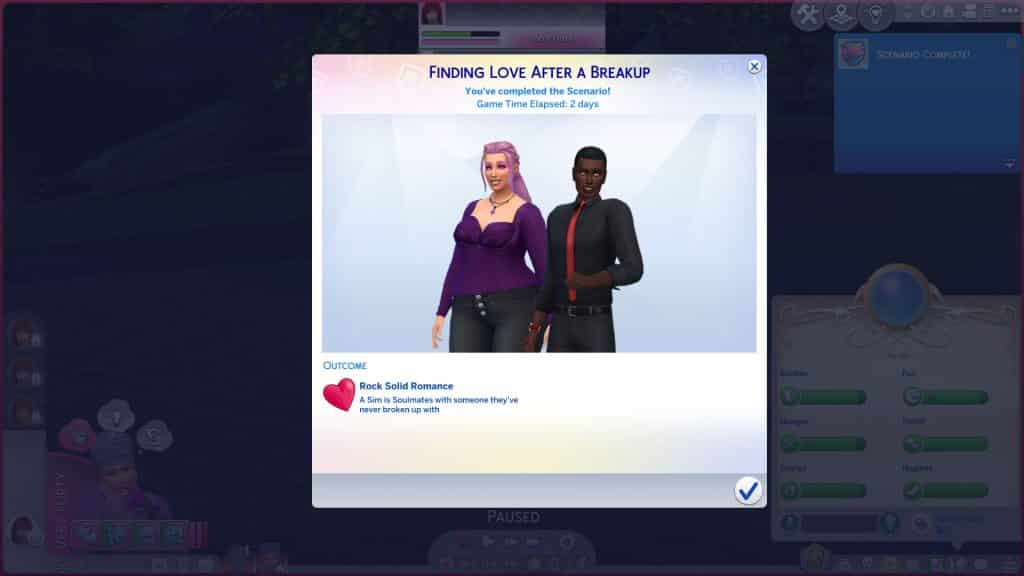 Once you complete a scenario, you can continue to play that save and enjoy your satisfaction points any way you like. I felt like this story still needed some closure, so I sent Serena home to tell Xavier she was moving in with Darrel and they were over for good. Darrel, meanwhile, went home and called his wedding with Emilia off. Emilia promptly broke up with him and moved out. Serena took her place and all’s well that ends well… sort of. 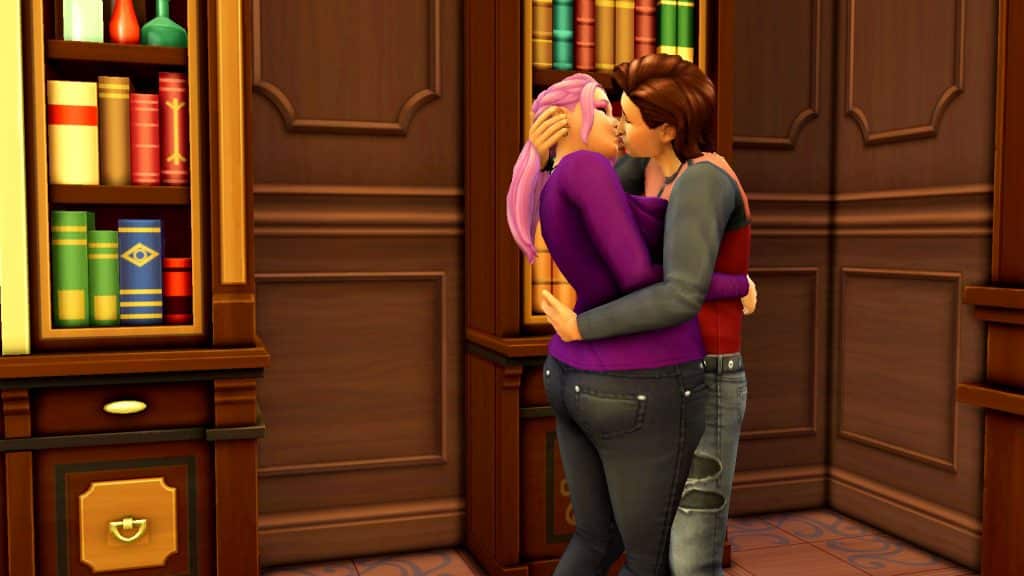 So what are my final thoughts after playing through this scenario? I was pleasantly surprised at how much freedom I had to complete the scenario my way. Not only were there three different ways to complete the scenario but the way the events unfolded in my scenario were unique to my game. Someone else’s scenario could have played out very differently even if they chose the same goal I did. The scenarios really show that The Sims 4 is as limitless as your imagination and I think I will be having a lot of fun playing more of these scenarios in the future!

Did you play this scenario, too? How did things play out for you? Let us know in the comments or come chat with us on social media!