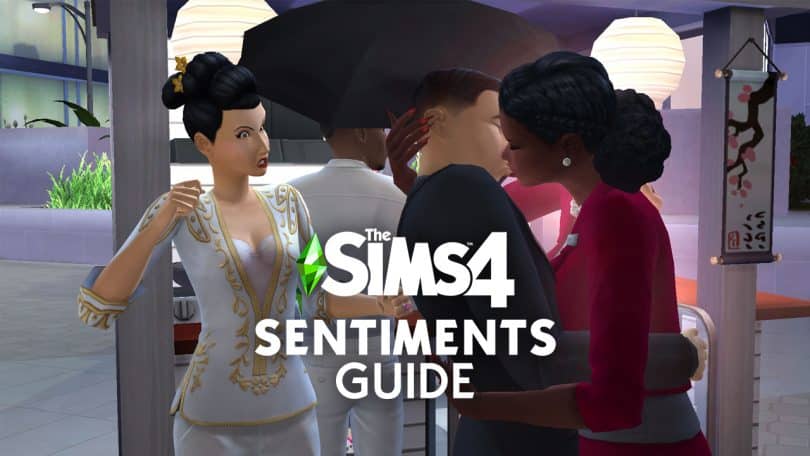 Sentiments are temporary feelings Sims have towards each other based on experiences that those Sims have shared together, both good and bad. They make relationships feel more immersive and realistic. They give you insight into exactly how a Sim is feeling about someone in the present moment. They’re one of the best additions to the base game we’ve seen to date and we’re going to explain all the different types of sentiments and what they do.

Sentiments can be short term or long term. For example, enjoying a hike together will create a short term positive sentiment. Hikes are a nice way to bond with someone but you probably won’t remember it as much ten years down the road. However, if you catch your partner cheating on you, that is a long term negative sentiment. You aren’t likely to forget a betrayal like that for a very long time. 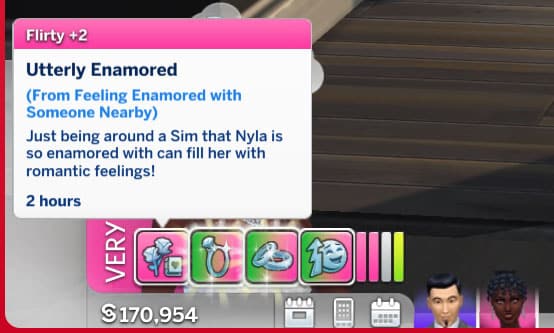 Sims will get moodlets from their sentiments when they are near that Sim.

Sentiments inform the way a Sim will feel and act around the other Sim. For example, if a Sim has the Furious About Cheating sentiment with their partner, they will get pretty powerful angry and/or sad moodlets related to the cheating every time they are around the Sim that cheated on them. They are also more likely to autonomously use Mean or Mischevious socials with that Sim and any attempts at friendly communication will fail much more often. On the flip side, a Sim with the Deeply in Love sentiment with their new spouse will have strong Happy and/or Flirty moodlets around their spouse and be more likely to use Friendly and Romantic socials with them.

A Sim can have up to four (4) sentiments at once for a single Sim. If the Sim gains a fifth (5th) sentiment, then it will replace the weakest of the previous four (4) sentiments. Sentiments are not always mutual! A Sim may have a positive sentiment towards a Sim while the other Sim could have a negative one for the other Sim. This adds a lot of storytelling potential and can make for some interesting social situations.

Here is the list of all 84 sentiments in the game and their descriptions. Sentiments with a DLC pack abbreviation in brackets before it indicate that it is exclusive to a DLC pack.

The names and descriptions of each sentiment give you a pretty clear idea of how to trigger that sentiment in-game but keep in mind that doing an action to trigger a sentiment may not always result in your Sims gaining that sentiment. When interacting with and doing activities with other Sims, there is only a chance that they may gain sentiments towards each other. It is not guaranteed to happen 100% of the time for every sentiment.

Other Notes and Observations 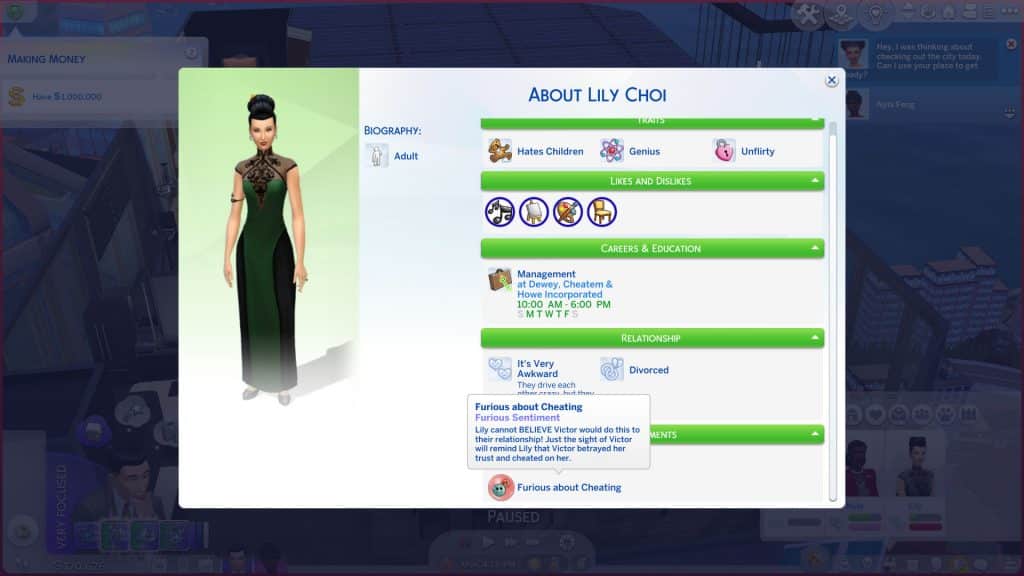 We can see Lily is furious that her now ex-husband cheated on her.

As stated above, you can get a pretty good idea of how to trigger most of the sentiments by reading the sentiment names and descriptions. For sentiments that are more vague, they can usually be triggered through general conversation. For example, the Closer From Happy Memories sentiment pops up quite frequently while having a pleasant conversation with another Sim. I’ve even gotten this sentiment immediately upon giving a friendly introduction to a new Sim. It’s probably the most common sentiment that pops up during gameplay because almost any friendly or funny exchange between Sims can trigger it. 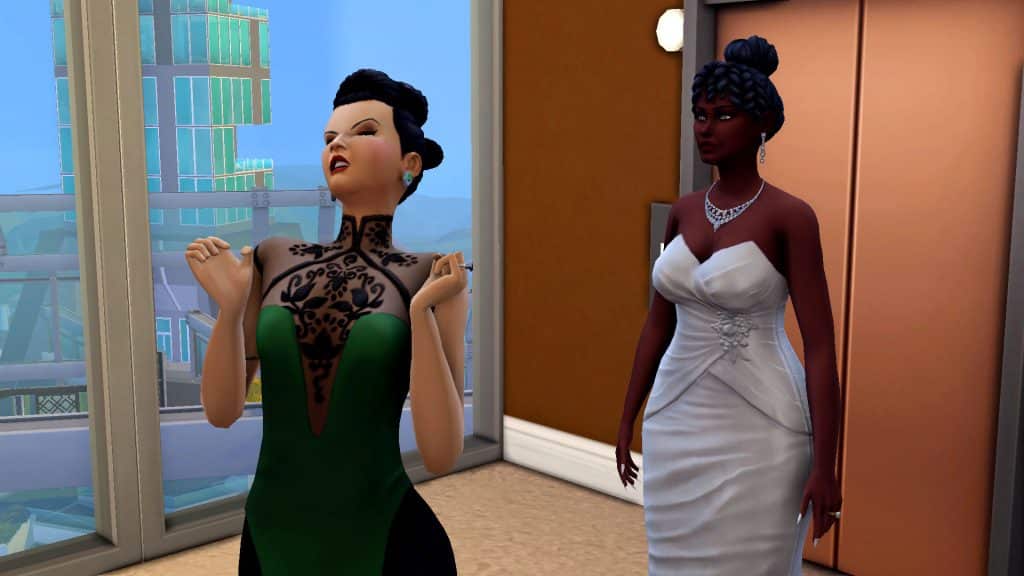 Lily can’t stand to be around her ex-husband’s new wife, the woman he cheated on her with.

Other more specific sentiments, like Awed by Lifesaving Hero and Close After a Close Call, require more specific actions. These sentiments can only be triggered by saving a Sim from death. I have received these sentiments on two separate occasions; once was when a Sim was on fire and another Sim extinguished them. The other time, a Sim drowned in the pool and the other Sim used a death flower to convince the Grim Reaper to spare their life. When you save a Sim from death, the Sim who was saved will receive the Awed by Lifesaving Hero sentiment. The other Sim will get the Close After a Close Call sentiment. 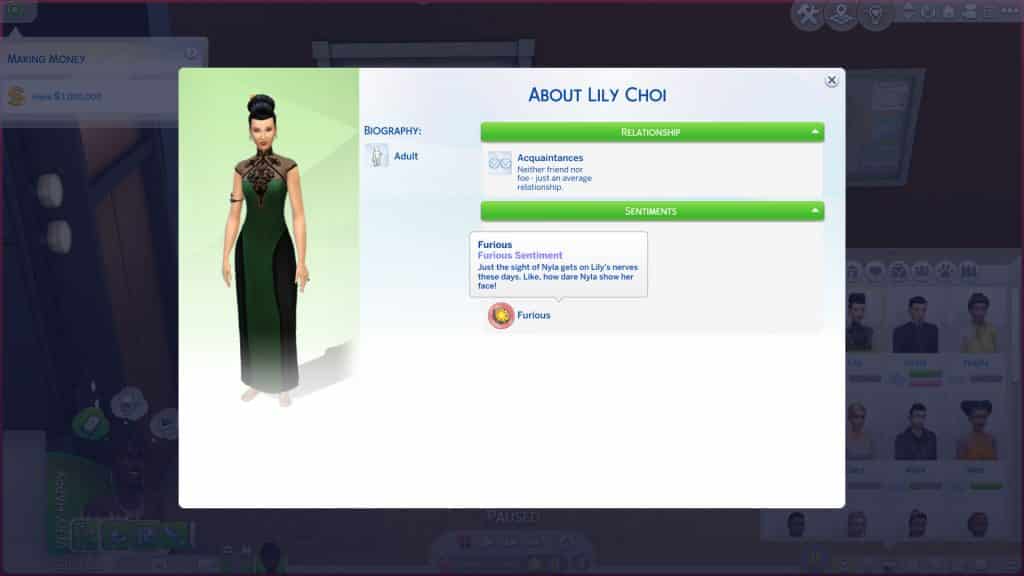 I used the UI Cheats mod to make Lily furious with Victor’s new wife since I thought that was pretty appropriate.

Again, it’s important to remember that not all sentiments are guaranteed to trigger 100% of the time. In my experience, the “big” sentiments like Deeply in Love after a wedding or Awed by Lifesaving Hero after being saved from death will always trigger but the smaller, less important sentiments like Closer From Happy Memories may not. The smaller sentiments gained through random conversation only have a chance of triggering, while the big sentiments from important life events will almost always trigger when those events occur. The game places more emphasis and importance on large milestones in Sims’ lives, which makes sense. If you just got divorced, you aren’t going to care very much about a funny joke someone just told you because you’re sad about something much bigger.

If you’re a PC player and a savvy mod user, you may be interested in the UI Cheats Extension mod by weerbesu to give you more control over sentiments. The Mod has just recently been updated with new functionality that allows you to attribute (and remove) any Sentiment in the game. You can right-click the Sentiments panel in a Sim’s info page to assign or remove any sentiment you want between those two Sims. This can be very handy for storytelling purposes. 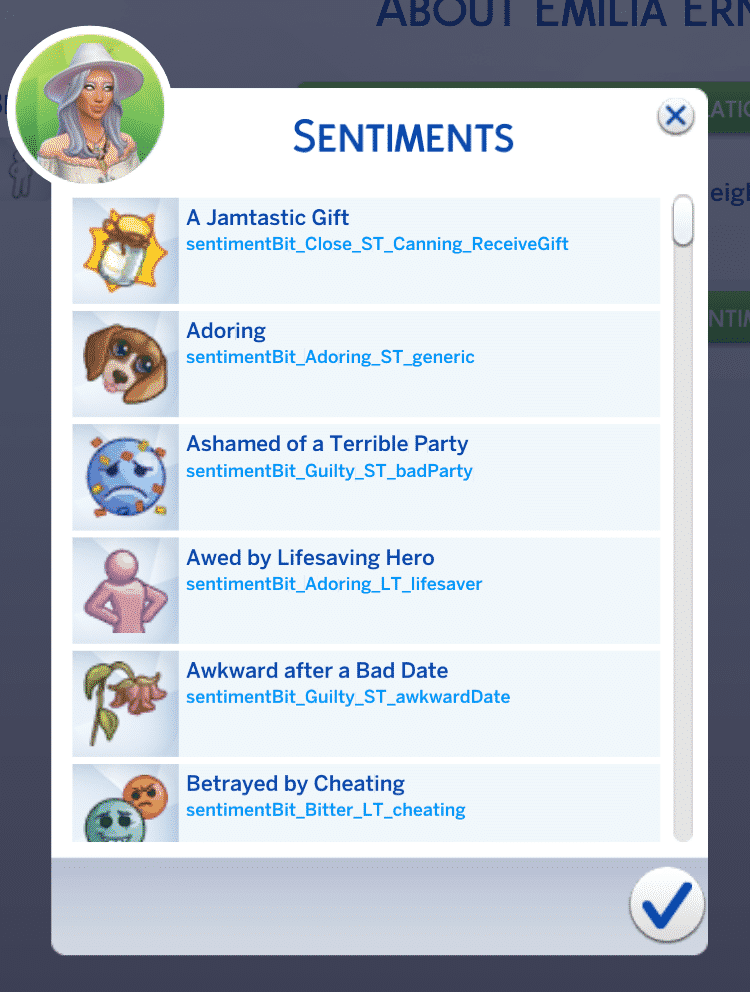