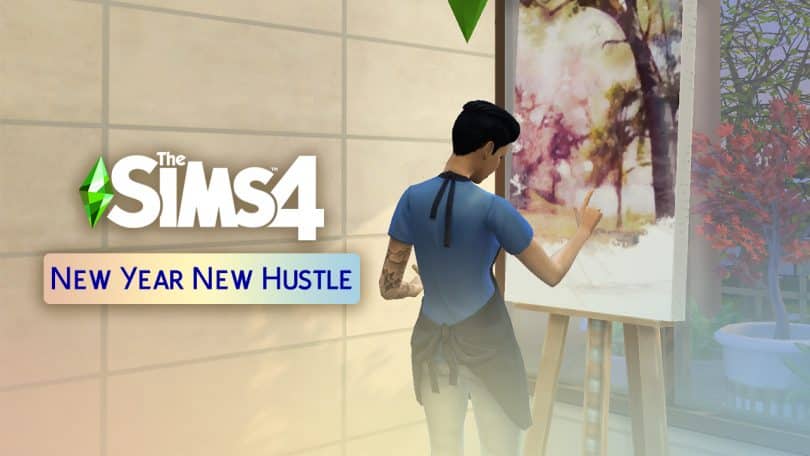 With a new year comes a brand new scenario to play through! The New Year New Hustle scenario lets you choose between career success or having a successful hustle business of your own. It’s a timed scenario that ends on February 2nd, 2022 so if you want a chance to play this one, make sure you start it before then. You can continue to play timed scenarios that are already in progress after they expire so there’s no rush to finish once you’ve started as long as you start the scenario before February 2nd. 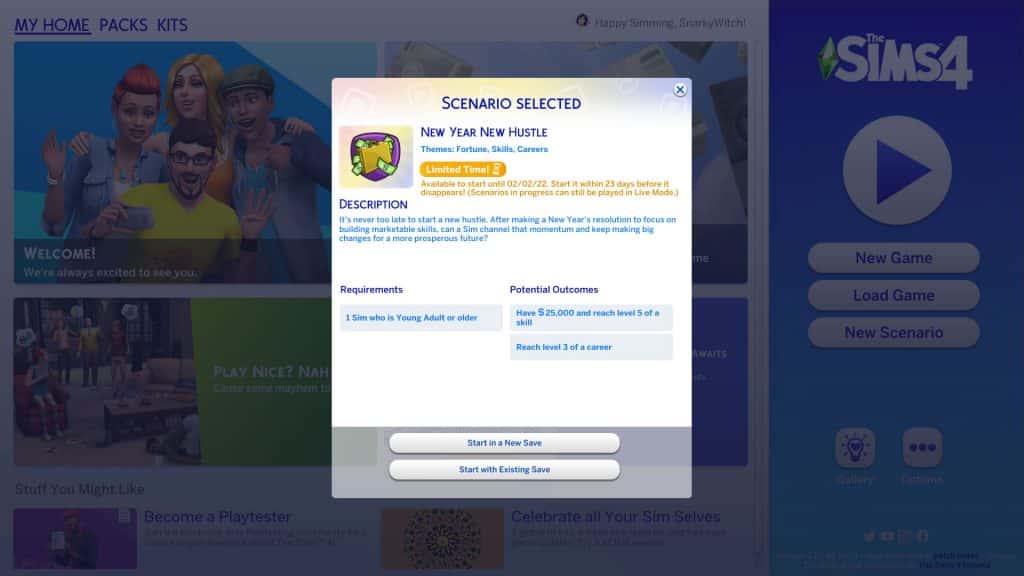 As usual, start from the main menu and select New Scenario to get this show on the road. Select the New Year New Hustle scenario from the list and jump into CAS to make your household of 1 Young Adult or older Sim.

I went with the default Sim the game spit out at me and decided to go down the Painter route with her so I gave her the Painter Extraordinaire aspiration and the Art Lover, Creative, and Perfectionist traits to help with her painting skill and the quality of her paintings. 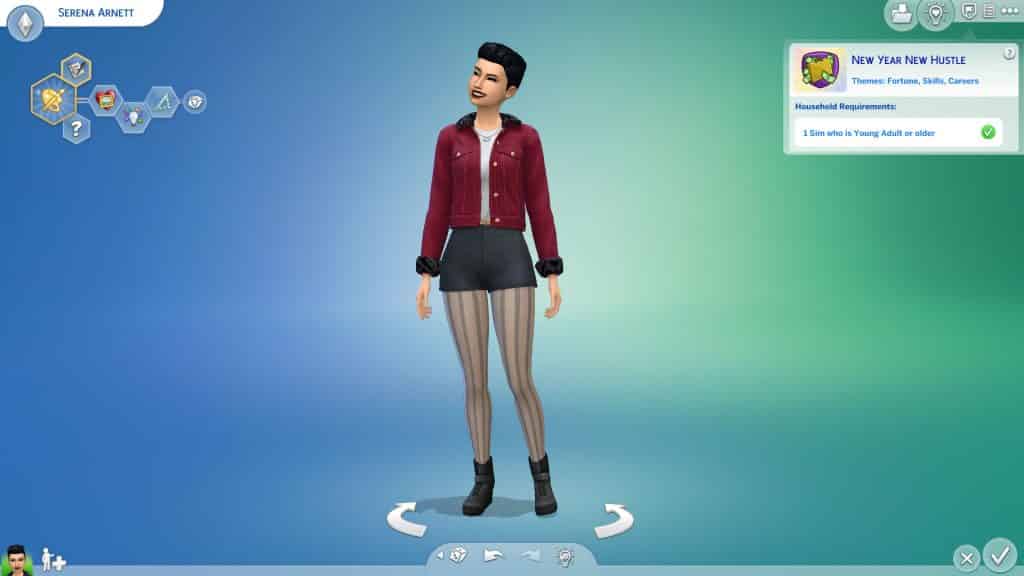 Don’t do what I did and misread the scenario summary! My silly self obviously did not have enough caffeine this morning and misread the outcomes. There are two potential outcomes for this scenario; your Sim can reach level 3 in any career, or they can make $25,000 and reach level 5 of any skill. It’s one or the other, so you’re basically deciding whether you want your Sim to pursue a career or a full-time hustle. For some reason, I thought we had to complete all three tasks. Don’t ask. I don’t know, either.

Anyway, I moved my new Sim, Serena, into the starter home in Mt. Komorebi. I thought Mt. Komorebi was a suitably inspiring place for a creative, artistic person. I bought her an easel with her leftover funds and then immediately had her join the Painter career. Then I sent her inside to paint. 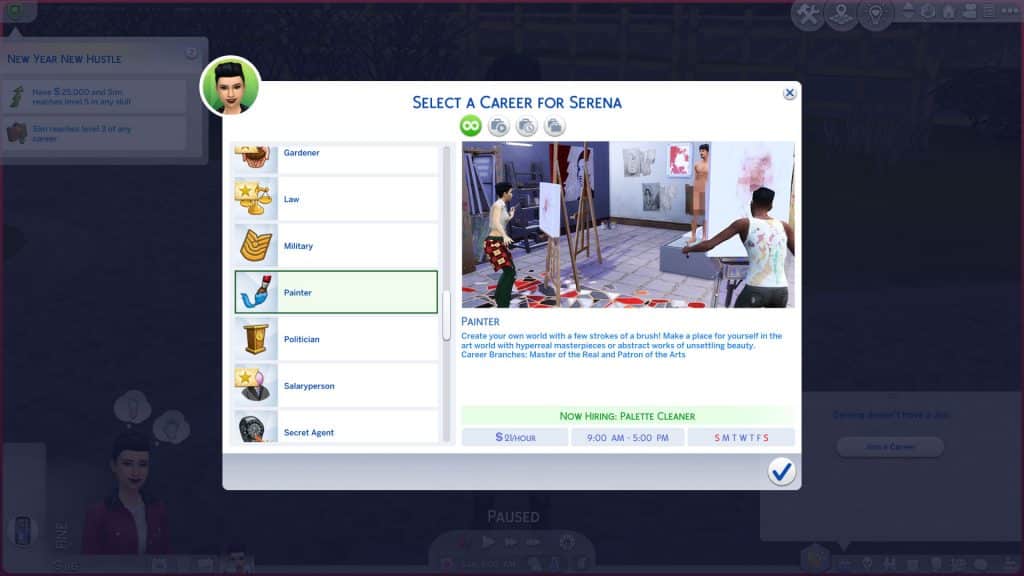 Since we were simultaneously working towards both outcomes even though we didn’t have to, I had Serena painting every moment of every day to try and make that $25,000 and to build her Painting skill up to level 5. She reached level 5 of the skill the same day she moved in thanks to Snowy Escape’s Surge Emotions feature. After painting for a certain length of time, Serena became Emotionally Mindful, which allowed her to put herself into the Very Inspired emotional state for the next 12 hours. This helped her build the Painting skill very fast and also helped her produce better paintings that sold for more simoleons. 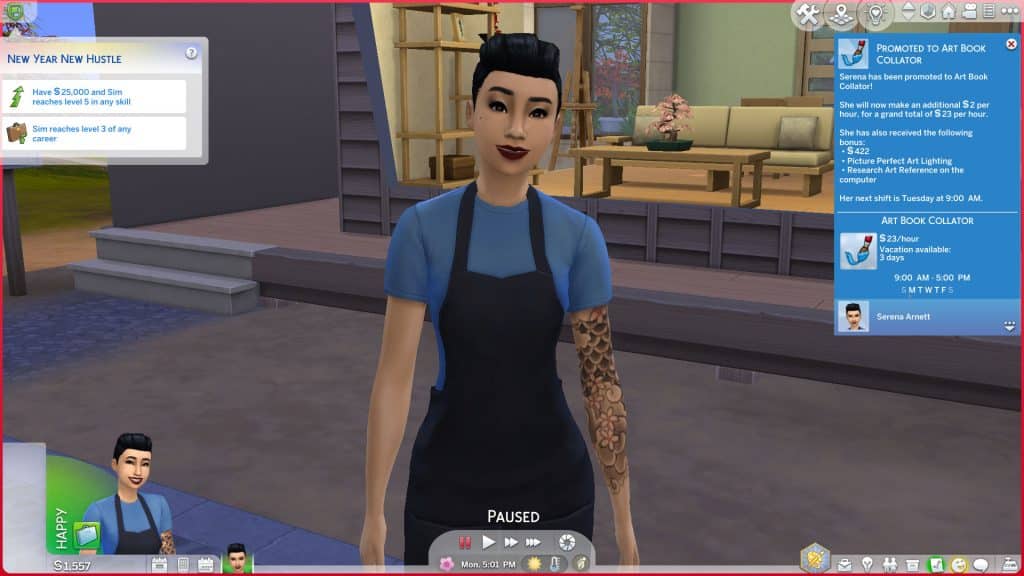 While in the process of making money and improving her Painting skill, Serena was also going to work. She got her first promotion on her very first day with very little effort, although I did choose the Work Hard option for her while she was there. It was helpful that her job tasks were just to complete paintings and build the Painting skill which she was already doing, anyway. It meant I didn’t have to go out of my way to focus on her career too much. 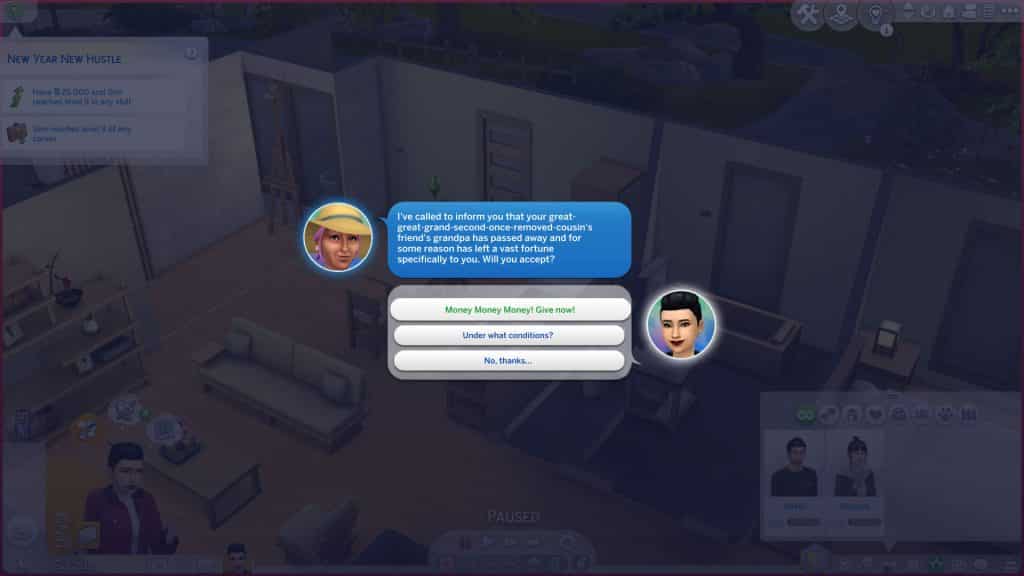 Just a couple days into this playthrough, Serena got that random inheritance call. I meant to click the Under What Conditions option to just get some quick cash but I accidentally clicked the Money Money Money option so all of a sudden, Serena now had to marry someone within 7 days to get the payout. This scenario just got a lot more interesting. Or so I thought.

The only people Serena knew were her neighbours, the Itos. I was too lazy to invest much time into meeting a new single day so I sent her over to her neighbours’ house to be a homewrecker. The plan was to seduce Naoki and convince him to divorce his wife so he could marry Serena but neither Naoki nor Megumi were home. Just their kids, Kiyoshi and Nanami. I thought I’d wait around for their parents to return so Serena had a nap while Nanami watched TV. Yeah, not weird at all for a stranger to walk into your house while you’re not home and sleep on your couch. Totally normal. 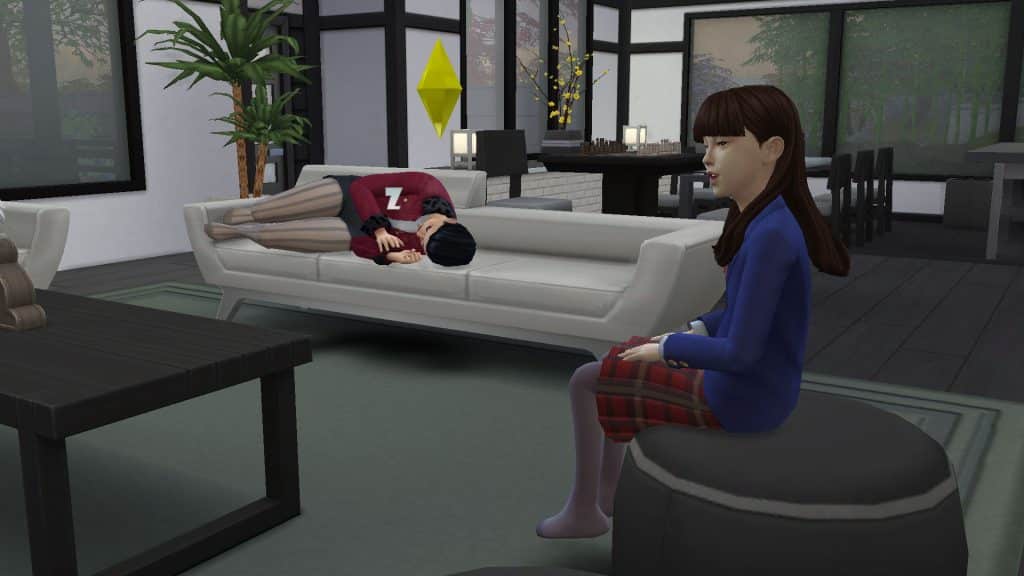 By the time Serena left, I had come to the conclusion that Naoki and Megumi were terrible parents because Serena stayed there all night and they never returned home. Kiyoshi never even bothered to check on his little sister once the whole night. He stayed in his room playing video games while Nanami had her face practically glued to the TV until 3 in the morning on a school night.

Oh well. Not my problem. I sent Serena home to paint some more before her next work shift. I could always invite Naoki over after work. 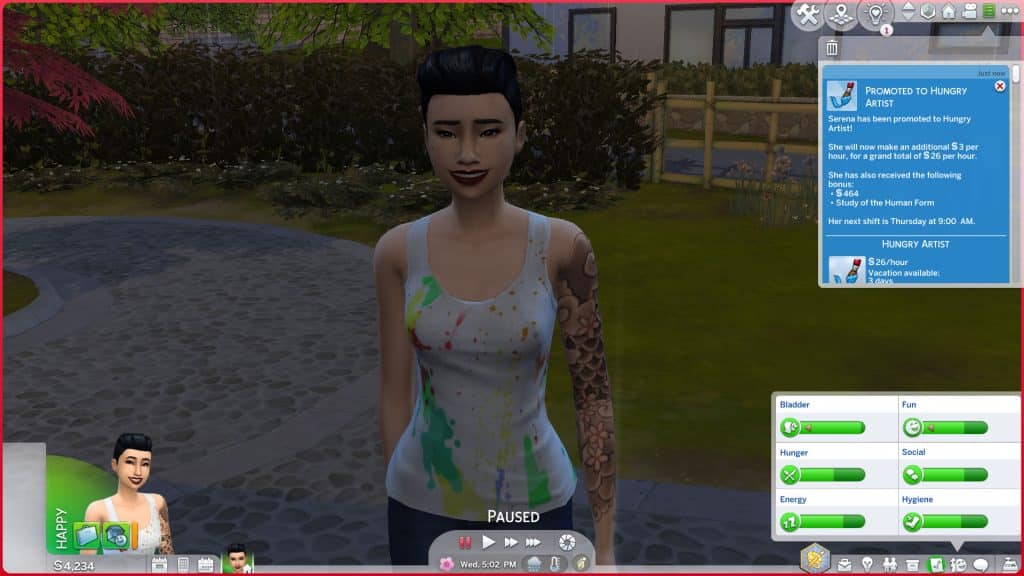 Or that was the plan but Serena got promoted to level 3 that day which completed the scenario. That was when I realized my blunder in misreading the outcomes. It was a very anti-climactic moment because I’d been expecting to continue to sell paintings and break up a marriage for money in order to earn the $25,000 and all of a sudden, the scenario was over just like that. Totally my fault for not reading the scenario properly but I can’t help but think this outcome is a little bit of a cop-out. It’s incredibly easy to get promoted twice in 3-4 days. You don’t even really have to try. You could go out of your way to do the bare minimum at work and still get promoted in The Sims 4. 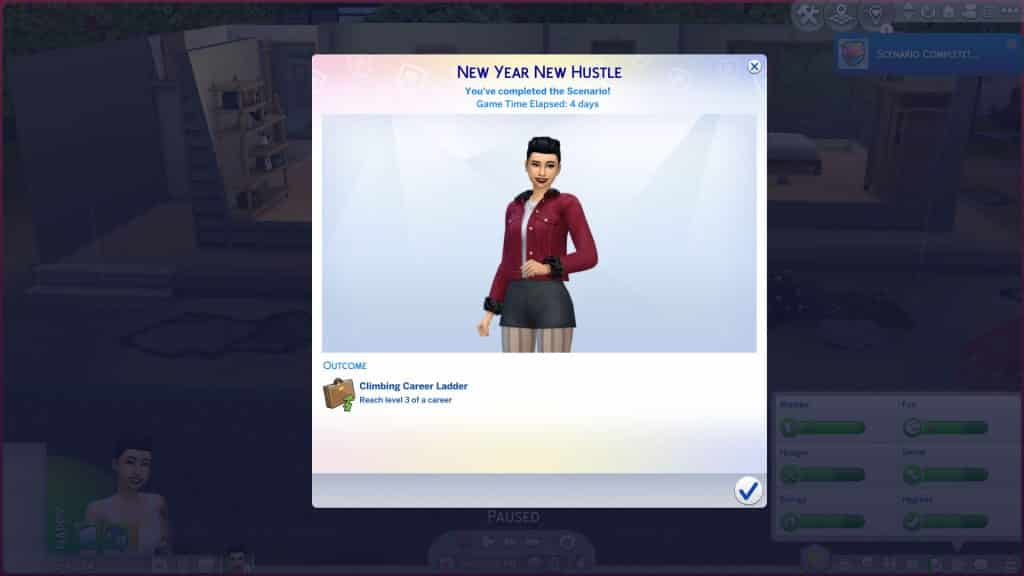 Had I read the scenario properly, I wouldn’t have chosen a career. It’s laughably easy even for newbie players. I would have just focused on the Painting skill and earning money through that. I’m also disappointed I never got to play out all that drama with the Itos. Oh well. Live and learn.

Bottom line: if you’re looking for a longer, more interesting scenario playthrough, don’t join a career. Go for the first potential outcome and focus on making simoleons through a skill. If you just want to rack up an easy 5,000 satisfaction points in a couple days with almost no effort whatsoever, go for the career option with this scenario.