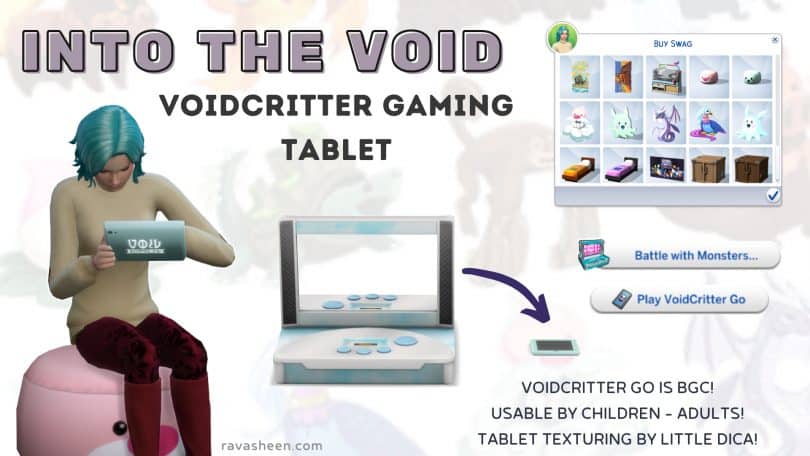 We’ve showcased many of Ravasheen‘s amazing creations in the past and this time, she’s teamed up with another talented creator, LittleDica, to change the world of Voidcritters forever!

What the heck are Voidcritters, you ask? Voidcritters came with the Kids Room Stuff pack and are essentially the Pokémon of the Sims universe. Children can collect, train, trade, and battle their Voidcritter cards against their friends. Each Voidcritter has its own lore, power level, and elemental alignment to make the battle and training mechanics an in-depth experience. Since the release of Kids Room Stuff, Voidcritters have made cameo appearances in later packs and updates. For example, Sims can own their own pet Bubalus with the My First Pet Stuff pack, one of the water-type Voidcritters. And the holiday cracker collection features a variety of Meduso plushies, one of the air-type Voidcritters.

All of this is already super cool on its own but of course Ravasheen and LittleDica have made Voidcritters even better! There were two main problems with the way Voidcritters worked; 1) The battle station was a big bulky object that wasn’t live-draggable. This means kids were limited to playing Voidcritters on lots that already had a battle station on them. 2) Only children could play with Voidcritters. Once they became teens, the cards they worked so hard to collect and train just became non-functional décor. Since it takes so long to train every Voidcritter to their max power level, kids often did not have enough time to fully enjoy their Voidcritters before they aged up.

Ravasheen and LittleDica have come together to solve both those problems AND add extra functionality to Voidcritters!

The Into The Void: Voidcritter Gaming Tablet will bring the world of Voidcritters to life in a new way for children and adults alike! It will eliminate the need for the big bulky battle station and allow Sims to take Voidcritters with them wherever they go. In addition to having all the same features as the existing battle station, it will also come with new features that are base game compatible. Players who don’t own Kids Room Stuff will still be able to collect virtual versions of the Voidcritter cards and play with the Voidcritter Go app on the tablet, as well as earn rewards for playing and purchase Voidcritter merchandise! Players who do own Kids Room Stuff will be able to purchase the physical cards and train/battle them with the tablet as well. Online play that increases relationships between Sims will also be a part of the mod.

That’s all the info that’s been released about this upcoming mod so far but you can look forward to a walkthrough of this mod from us when it’s released! We can’t wait to get our hands on this mod and experience the world of Voidcritters in an entirely new light!

The Into The Void: Voidcritter Gaming Tablet is being released on January 23rd for patrons but you can expect a public release in the coming weeks. Make sure you’re subscribed to Ravasheen’s YouTube channel and set a reminder so you don’t miss her livestream showcasing the mod on release day!