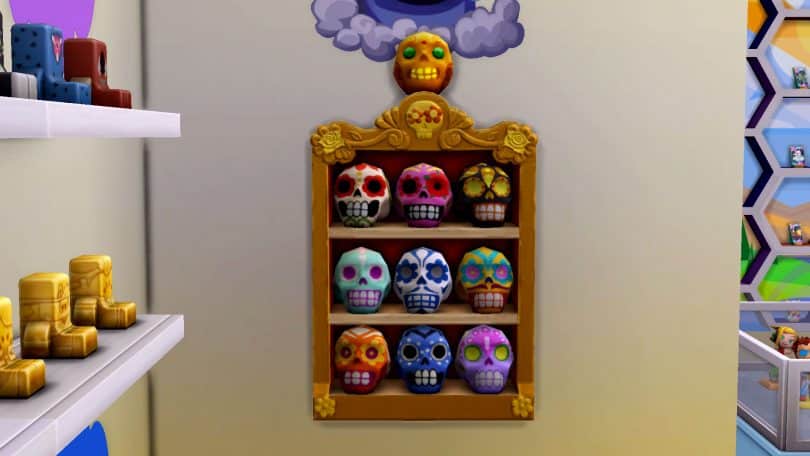 The Sims 4 has a lot of collections for players to complete; you could easily sink hundreds upon hundreds of hours into finishing all the collections alone. Some collections are no longer accessible without the use of cheats; they were part of limited time events the game has hosted over the years.

One such collection that was part of a limited time event is the Day of the Dead sugar skulls but many players don’t know that you can still collect the sugar skulls and finish the collection! No cheats or mods required!

To finish the sugar skull collection, your Sims will need a tombstone, a ghost, and the display case designed specifically to hold the sugar skulls, found in Build/Buy. 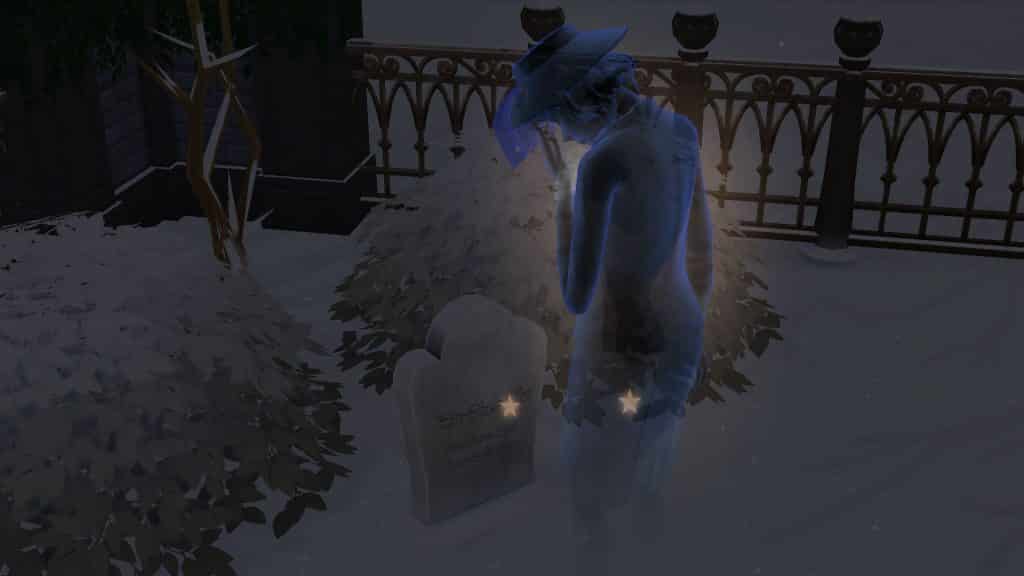 To start collecting sugar skulls, your Sims will need to have access to a tombstone with a ghost still attached to it. A decorative tombstone will not work, nor will a tombstone whose ghost has been released to the netherworld.

Downloading a ghost from the Gallery will not work, either, since these ghosts don’t come with a tombstone. You need both the tombstone object and the ghost that inhabits it for this to work.

Basically, there’s no way around it; you have to kill a Sim in your game. 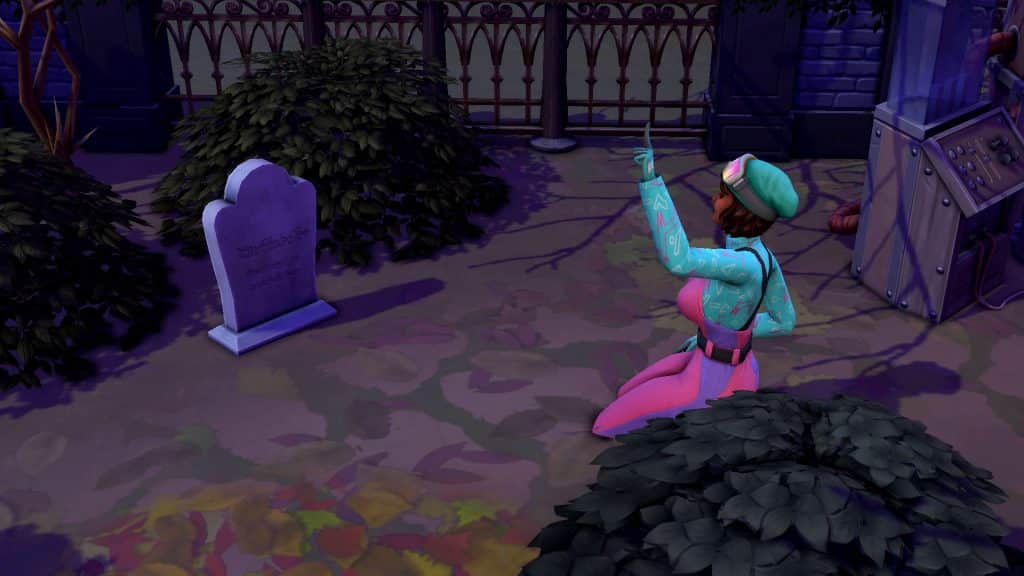 Once you have a tombstone with a ghost attached to it, one of the available options on the tombstone will be Leave Sugar Skull Offering. Your Sim does not actually need to have a sugar skull in their inventory to make this offering. The option is available on tombstones with ghosts 24/7 but make sure your Sims are only making offerings at night; making an offering during the day will always fail.

Your Sims are more likely to have their offerings accepted if they had a good relationship with the deceased Sim while they were still alive. There is also a cooldown period of about 24 in-game hours in between offerings so each Sim in your household can only leave an offering once per night.

Find the Day of the Dead Celebrator 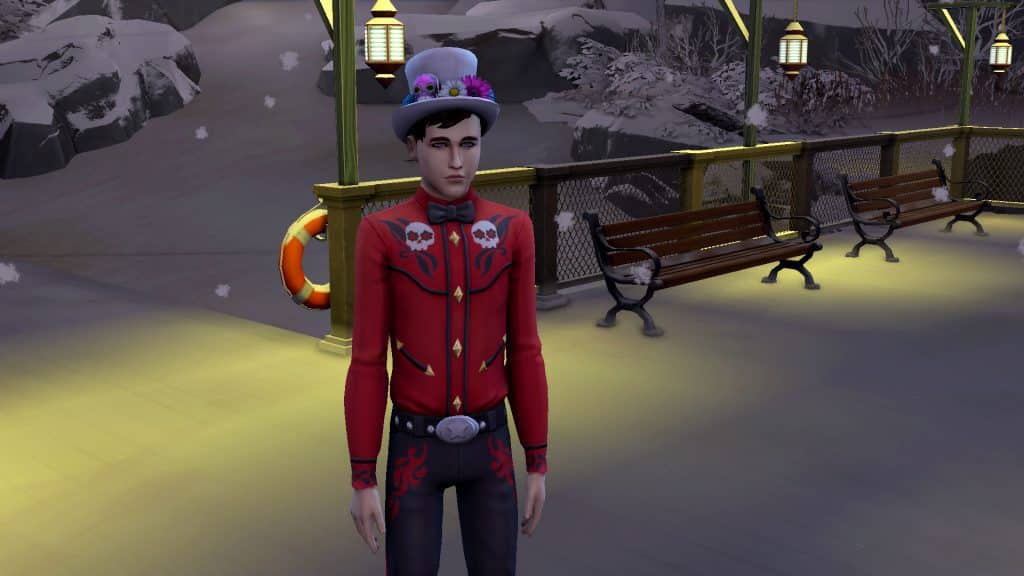 You can ask the Day of the Dead Celebrator for a sugar skull but they will refuse if they don’t know you well enough. Have your Sim spend some time befriending them before asking them for the sugar skull. You should be friends with the Sim and be having a Pleasant conversation before asking. If they still refuse, just keep doing friendly interactions with them until they’re willing to hand over the sugar skull.

The sugar skull you get is somewhat random in the sense that you can’t control which sugar skull you will receive, but you are more likely to get the common ones. Like most collections in the game, you could be spending quite some time trying to get those last one or two rare ones.

There is also one specific sugar skull you can’t get from the Day of the Dead Celebrators. More on that in the next section. 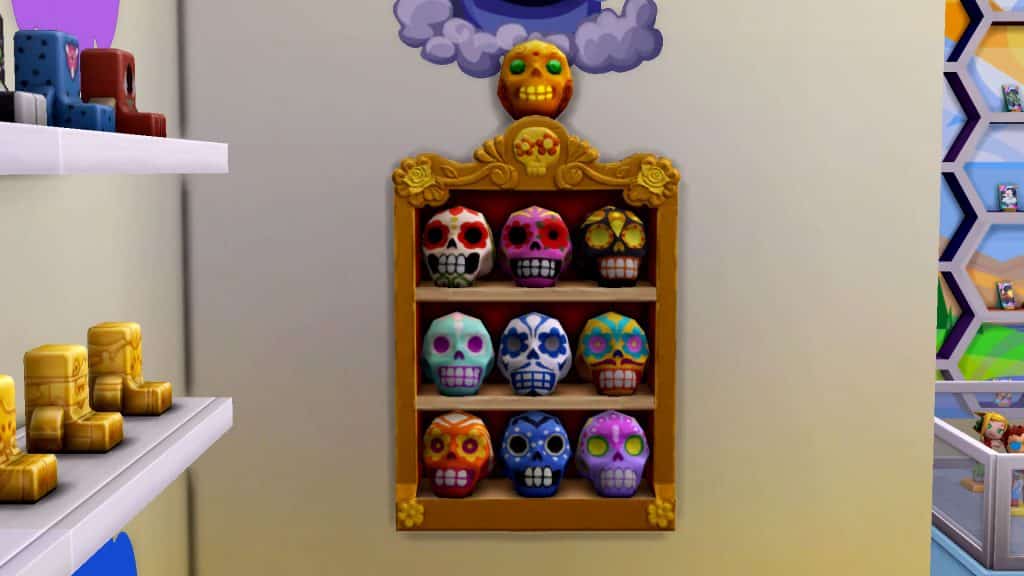 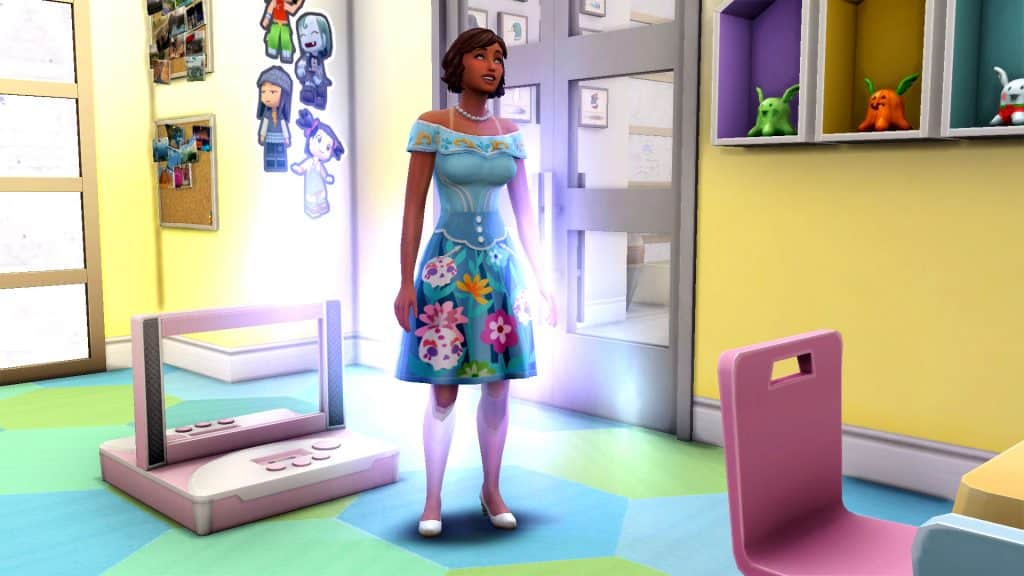 If you’re interested, the sugar skull descriptions tell a story when put all together. You can read the full story in the collections panel after completing the entire collection. We’ll let you complete the collection and read the story for yourselves, though. No spoilers here.

Honouring the Dead doesn’t just complete the collection; it will also give your Sim special abilities regarding the Grim Reaper for the next 6 in-game hours. They will change into the same clothes as the Day of the Dead Celebrators. They will also get a +1 Happy moodlet called Day of the Dead Celebrant moodlet for the next 6 in-game hours. If Grim shows up while this moodlet is still active on your Sim, your Sim will be able to enjoy increased relationship gain with him. They will also have a much better chance of successfully pleading for another Sim’s life. On top of that, they will have some extra friendly socials available to them when talking to the Grim Reaper, such as Complain About Spirits, Discuss Afterlife, and Enthuse About Sugar Skulls. 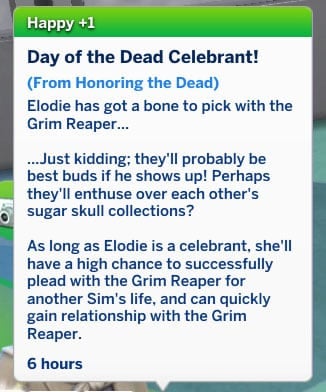