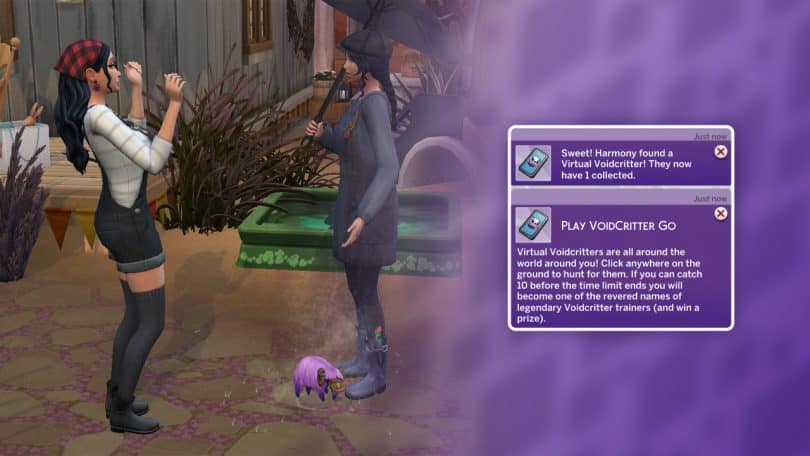 Have you heard of Voidcritters? If not, you’re about to become well-acquainted with them! Voidcritters are the Sims equivalent of Pokémon; cute fictional creatures featured on television and on collectible trading cards that kids can collect, train, trade, and battle with. They come with the Kids Room Stuff pack but references to Voidcritters are littered throughout the entire game across many different packs.

If you own Kids Room Stuff and have played with Voidcritters, you’ll know that Voidcritters are extremely detailed and fun but they have some frustrating limitations. For one thing, only children can play with Voidcritter cards. Since it takes so long to complete the collection and fully train every Voidcritter, kids often didn’t have enough time to fully enjoy the Voidcritters they worked so hard to collect before they age up. Also, kids had to use the Voidcritter battle station to train and battle with their Voidcritters. The battle station does have a lot of fun animations but it’s a big bulky stationary object. This limited kids to only being able to play on lots that had a battle station on them.

Ravasheen and LittleDica have put their heads together to create a new, functional object that eliminates all of these limitations! The Into The Void: Voidcritter Gaming Tablet is usable by children, teens, young adults, adults, and elders! It allows your Sims to take Voidcritters with them on the go and comes with both Base Game and Kids Room Stuff functionality! Players who own Kids Room Stuff will have access to the tablet’s full range of features but the tablet does have gameplay for base game players, too!

Of course, you will have to install the mod, first. You can get it from Ravasheen’s website. The current version is in early access for patrons only but will be released to the public on February 15th, 2022. If you need help with installing mods, check out our article Getting Started With Mods and CC. 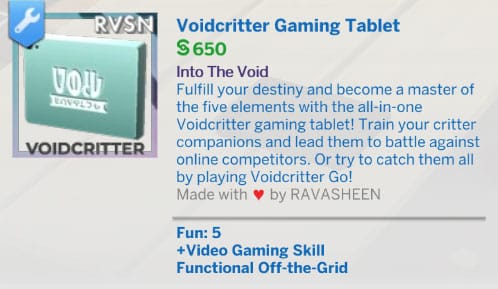 Once the mod is installed correctly, all you have to do is load up the game and go into Build/Buy. The Voidcritter gaming tablet will be located under the Kids’ Activities category. You can also search “rvsn” in the search bar to bring up all of Ravasheen’s content you have installed in your game. 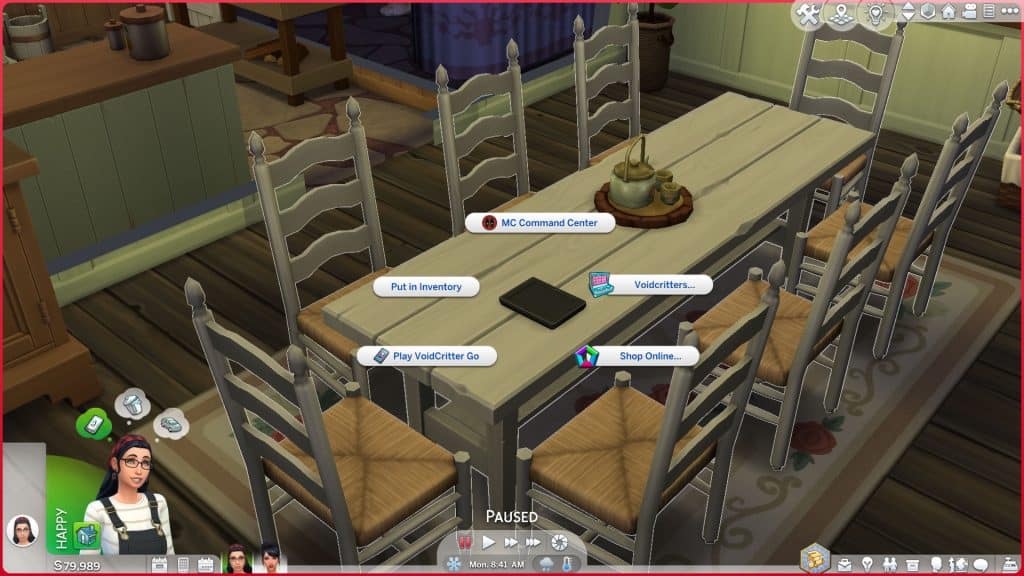 To start playing Voidcritter GO, click on the gaming tablet either in the world or in a Sim’s inventory and select Voidcritter GO. This will start a timer that lasts for 8 in-game hours. Your Sim will get a Fine moodlet for the duration of the timer so you can see how long you have left by looking at the moodlet. 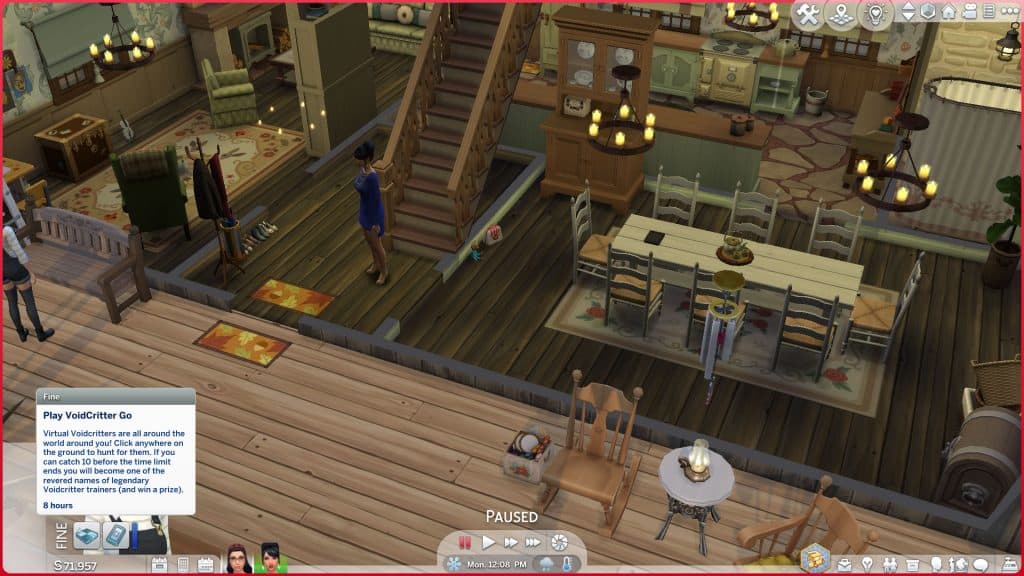 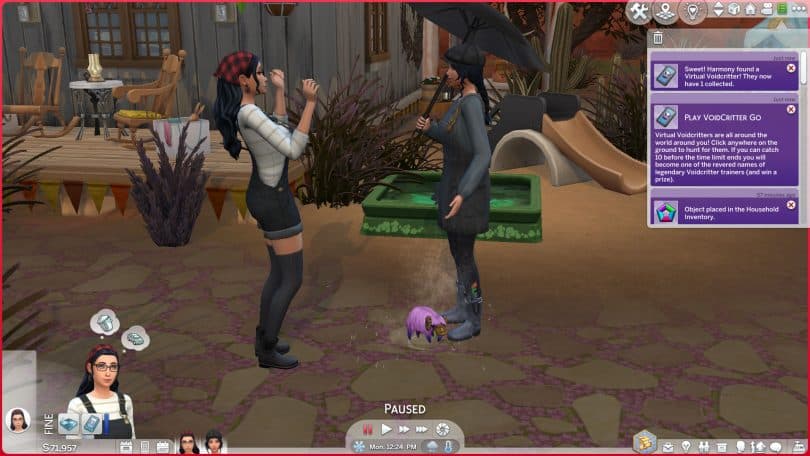 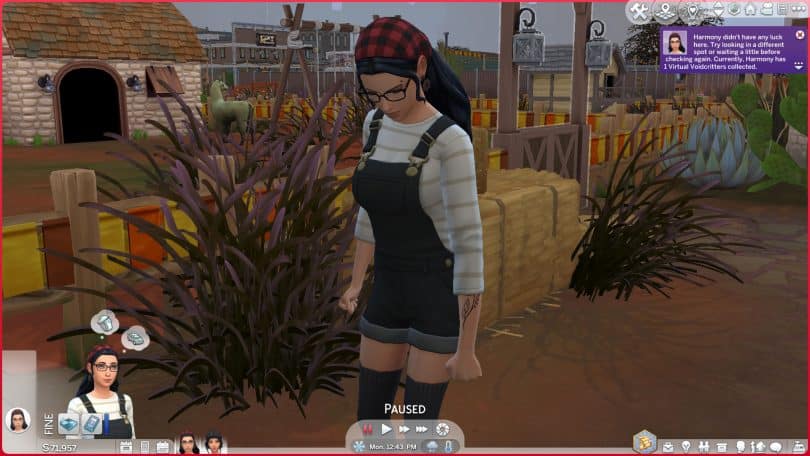 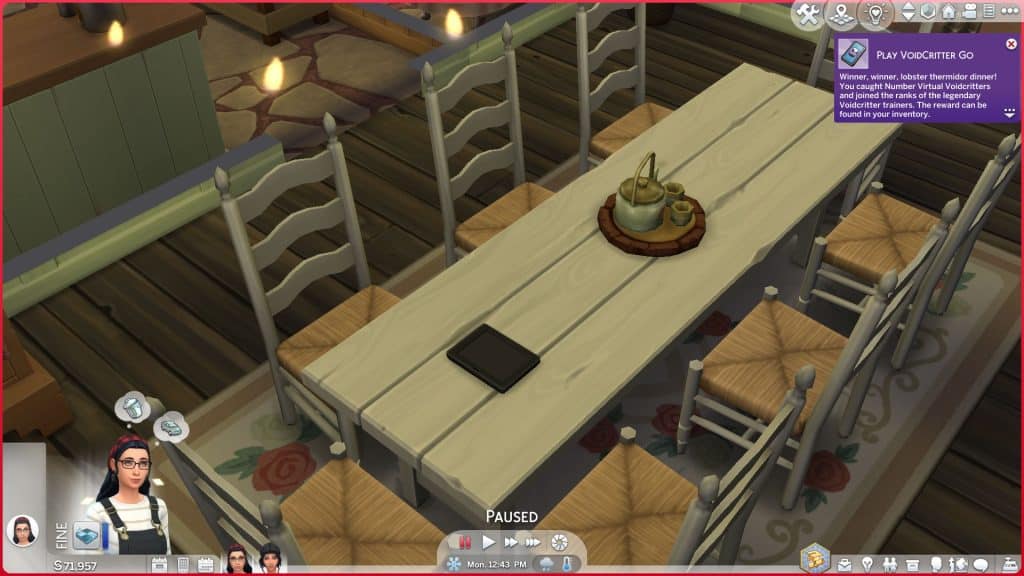 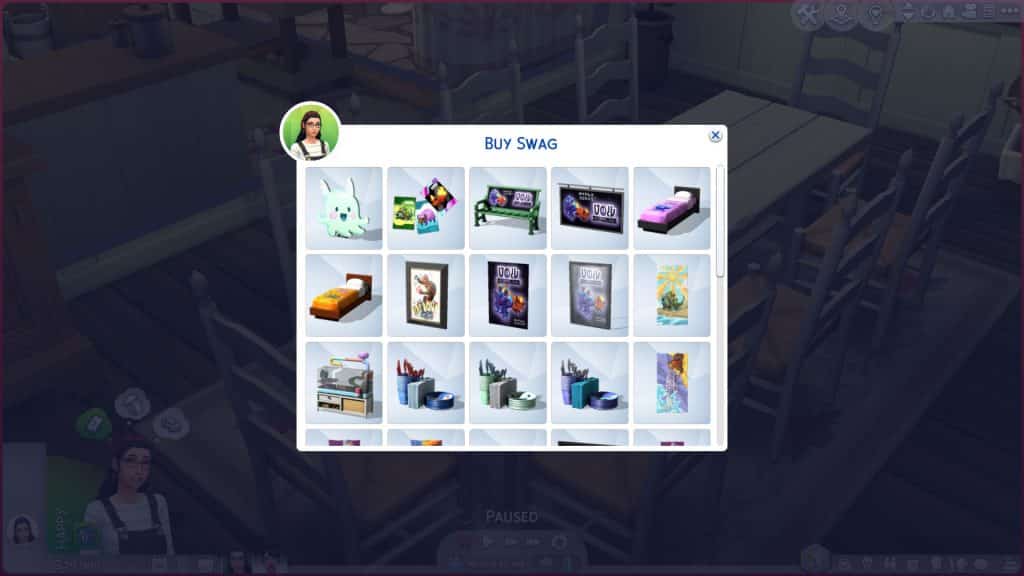 There are a variety of Voidcritter themed items scattered throughout both the base game and various packs that Ravasheen’s compiled for purchase as swag through the tablet. Players with more packs will see more items available for purchase but base game players will also have access to some Voidcritter-themed goodies.

Pictured below are all the Voidcritter-themed items you can purchase from the tablet across all packs: 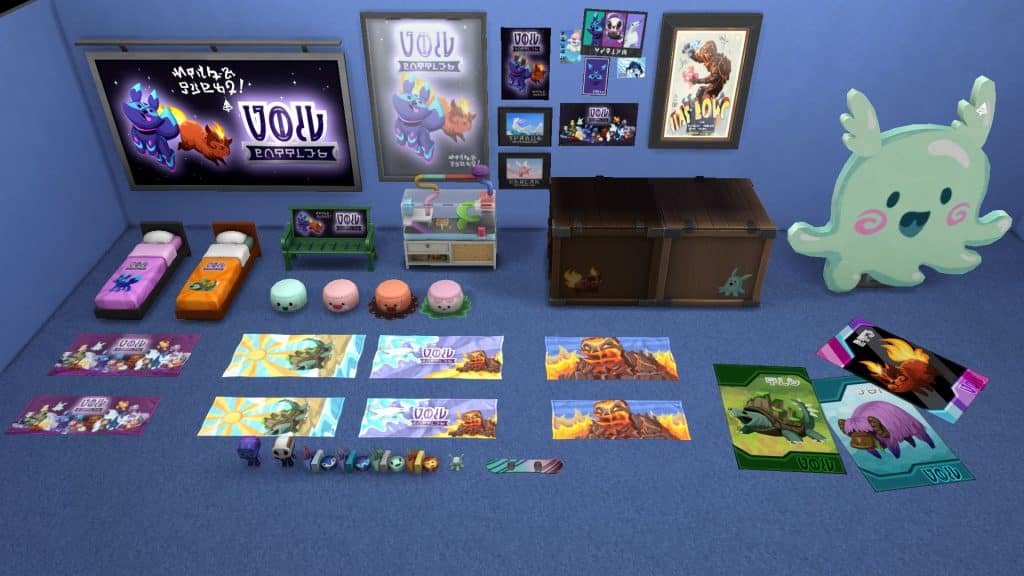 Players who own Kids Room Stuff can also purchase the wall decals of all the Voidcritters that come with this stuff pack, pictured below: 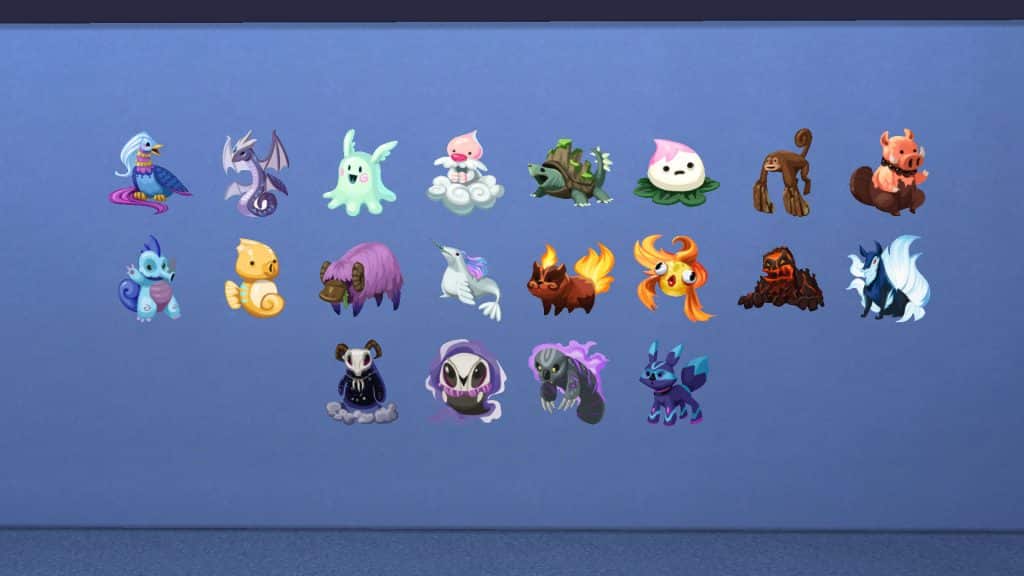 Training Voidcritters is only available to players who own the Kids Room Stuff pack. Sims will need to own at least one Voidcritter card to train them on the tablet but unlike the battle station, the cards don’t need to be in your Sim’s inventory. Any card displayed on the lot can still be trained! This is great for players who like to display their Voidcritter card collection. They don’t need to constantly be dragging them in and out of the Sim inventory to train and battle with them. 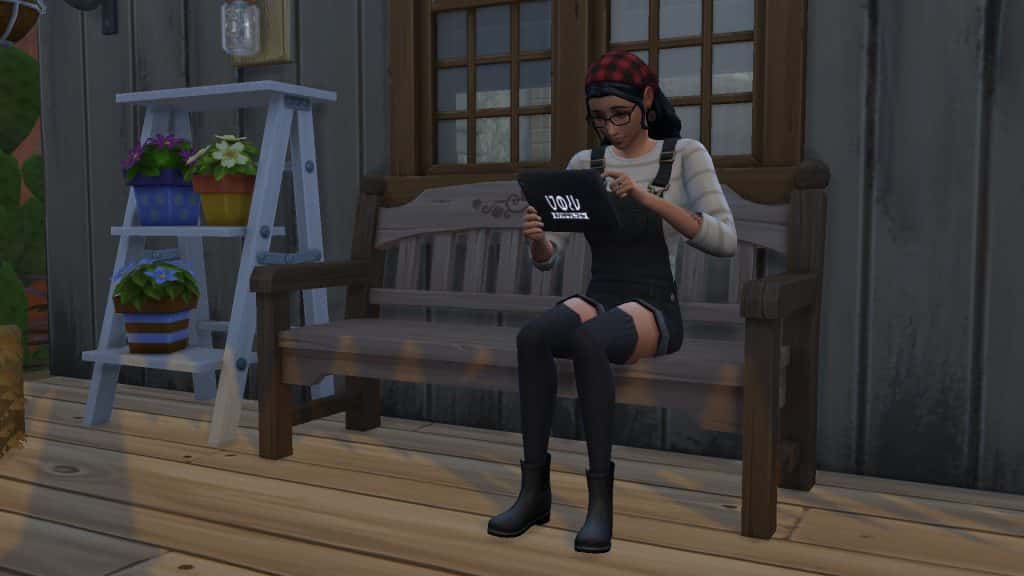 Once you’ve chosen a Voidcritter to train, your Sims will sit down with the tablet and begin a training session. The tablet does not display the same dynamic display for each Voidcritter like the battle station but it does play the Voidcritter television show from the BeTween TV channel and has all the same audio from the show which is still fun to watch. 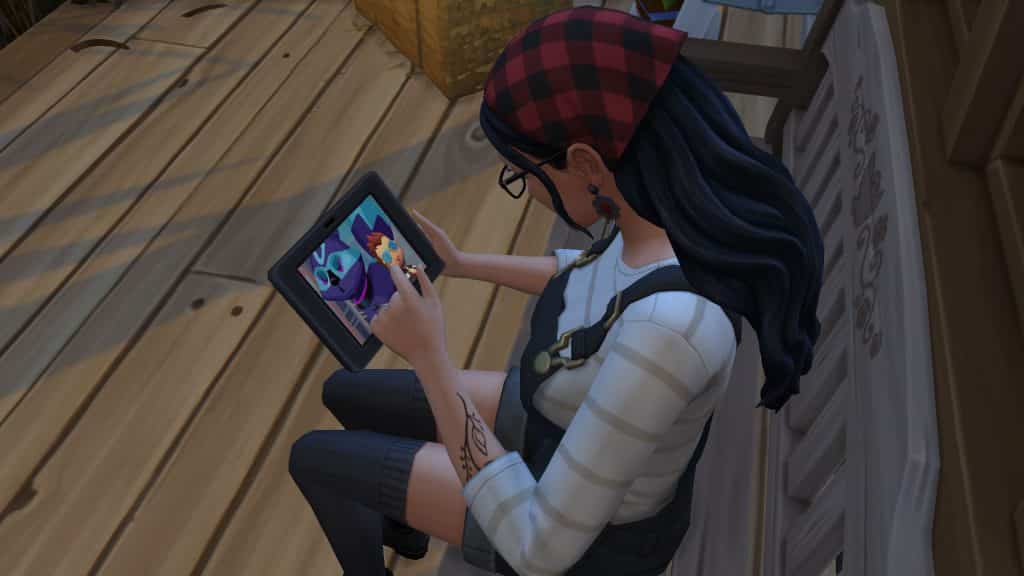 Once a Voidcritter has been trained to its maximum power level of 10, it will no longer show up in the menu when selecting Voidcritters to train, since it cannot be trained any further.

Currently, the gaming tablet can only be used for online battles with other players who are not on the lot but Ravasheen does plan to implement PVP battles between Sims on the same lot in the future. 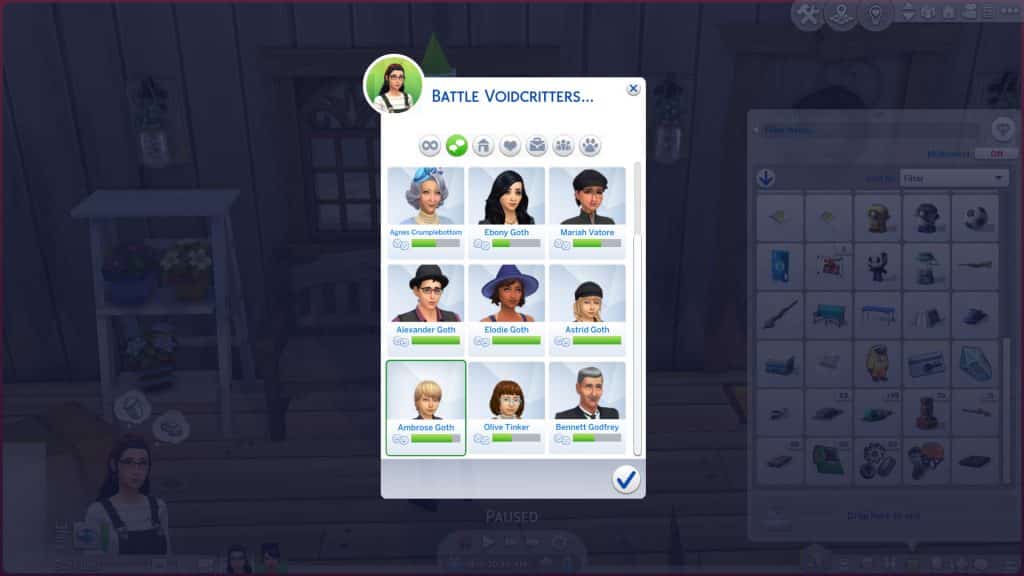 Once your Sim sits down to battle against their opponent, the battle results are calculated by comparing different stats. The game will compare your Sim’s Video Gaming skill (or Motor skill for children), the type, rarity and power level of their Voidcritter against their opponent’s. Therefore, you have much higher chances of winning a battle if your Sim is using a rare Voidcritter with a high power level and your Sim has high Video Gaming/Motor skill. However, a win is never guaranteed. There is an element of randomness added to the mix, too. 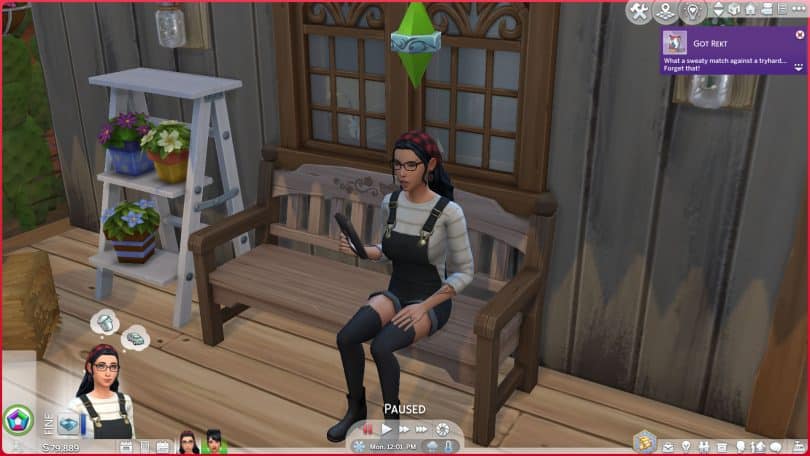 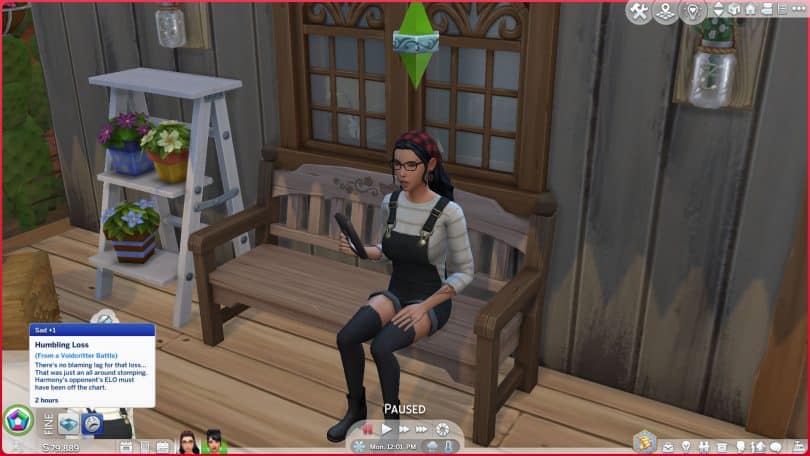 Winning a battle will give your Sim a happy moodlet while losing a battle will give them a sad moodlet. Sims will also build (or lose) relationship with the Sim they are battling against. This is largely based on traits; Sims with traits like evil or mean will be sore losers and take a loss personally. 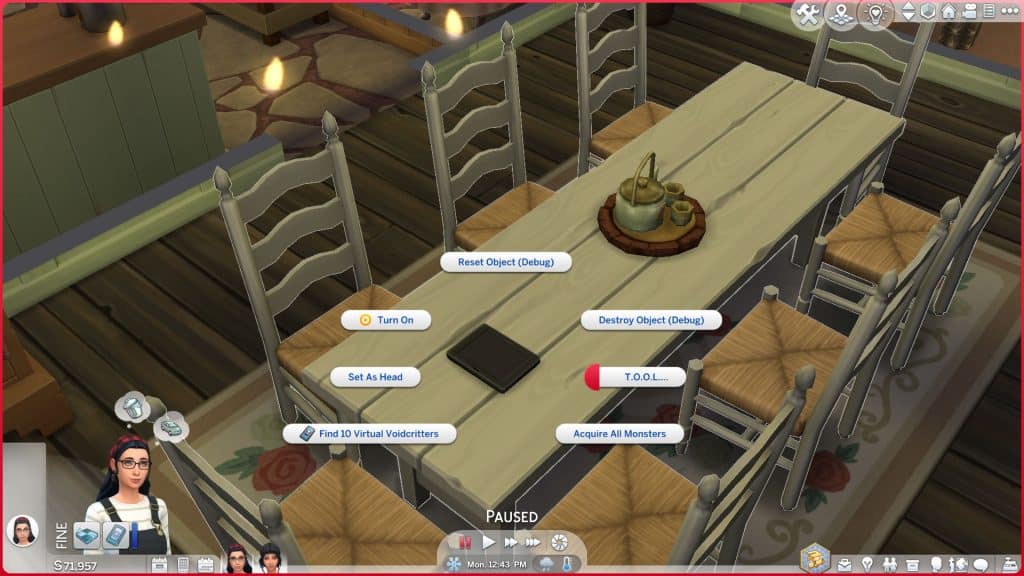 Every time I think Ravasheen can’t impress me any more than she already has, she does something like this that sets the bar even higher. And LittleDica’s contribution to making the tablet object can’t be overlooked, either; his textures are beautiful and the tablet is a perfect Maxis Match addition to the game.

I have been in love with Voidcritters ever since Kids Room Stuff released and it remains one of my favourite stuff packs to this day because of the Voidcritters. I think it’s one of the coolest yet one of the most underrated features ever added to the game. That’s mostly due to the fact that all of the gameplay surrounding Voidcritters is locked to everyone except children. Even if you are a family player, you probably figured Voidcritters weren’t worth bothering with because your kids wouldn’t have the time to invest in them before aging up, anyway.

So if you’ve ever wondered what the big deal is about Voidcritters, definitely add the Into the Void: Voidcritter Gaming Tablet to your mod collection and let your Sims of all ages see what they’re about!