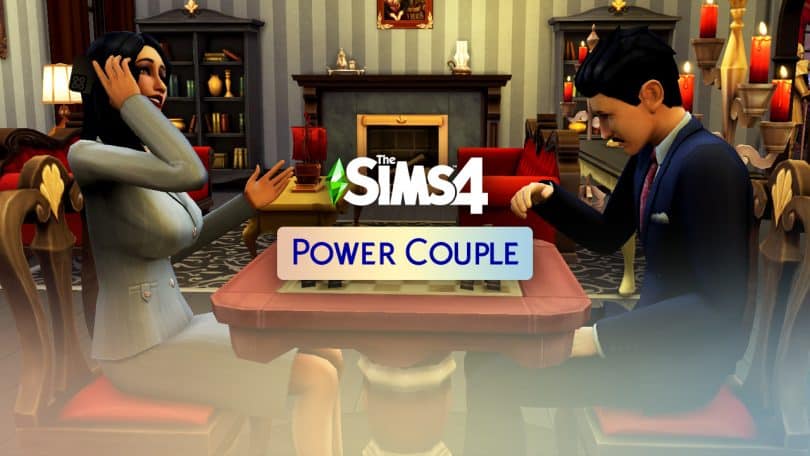 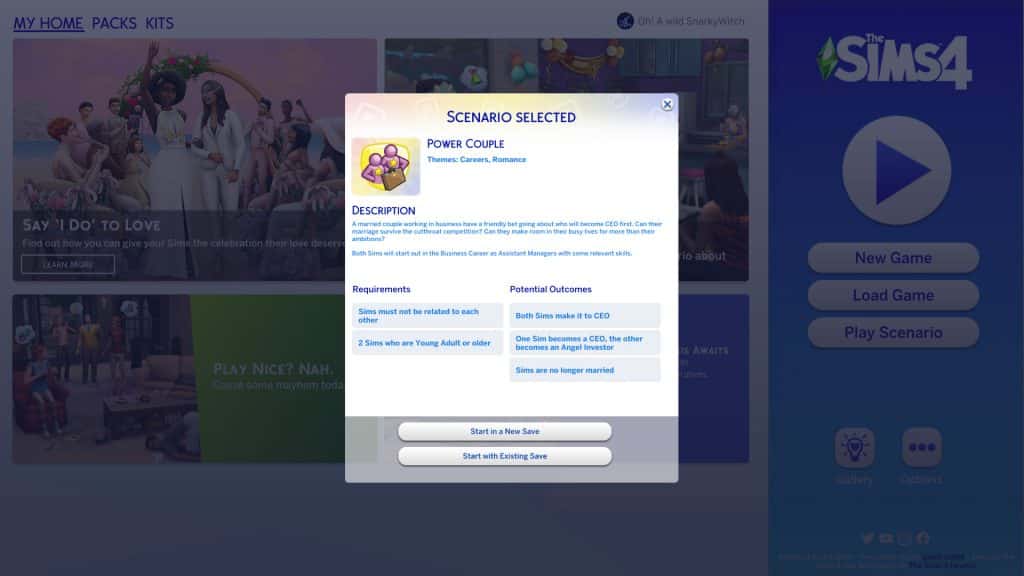 As usual, we selected the New Scenario option on the main menu and selected the Power Couple scenario to see all of the info on it. Unlike a lot of past scenarios, players don’t need to worry about starting this one before a certain date. This is a permanent scenario that’s here to stay for good!

The description states that a married couple who are both in business together are having a competition between themselves to see who can become CEO first. The household requires 2 Young Adult or older Sims who are not related to each other. Both Sims in the scenario will start out in the Business career as Assistant Managers (Level 4) and start with some skills relevant to their careers.

We were pretty intrigued by these possible outcomes! They sounded like they’d be a decent challenge with some room to tell our our own stories alongside the career grind. 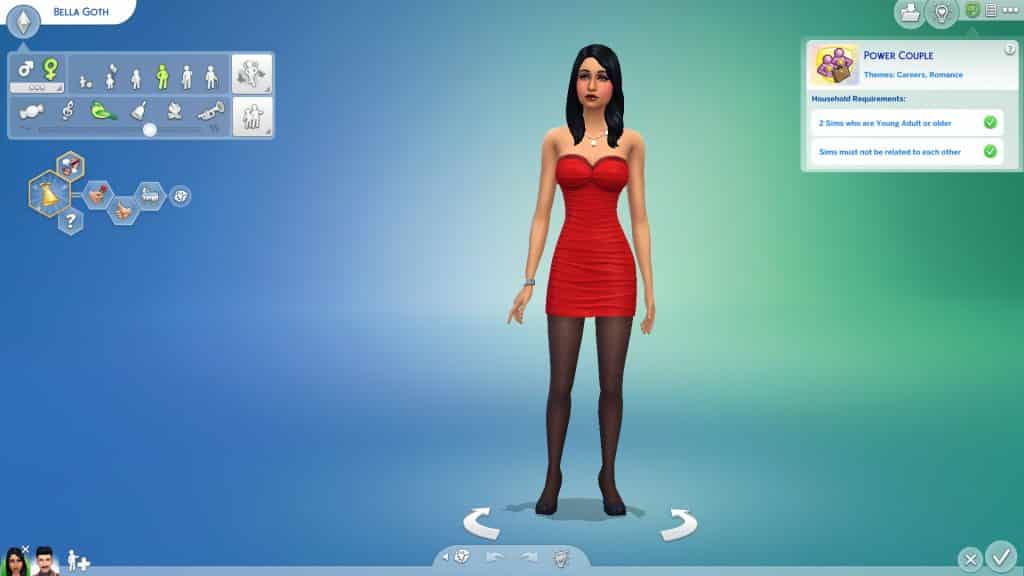 Normally, we just randomise two nondescript Sims in CAS and jump right in but not this time. This time, we knew exactly who we wanted our power couple to be. Who could be more perfect for a power couple scenario than the ultimate, OG Sims power couple; Bella and Mortimer Goth?! Absolute legends!

Of course, scenarios are not currently set up to allow us to start a new scenario with an existing household so we had to first save Bella and Mortimer to our library. Then when we started the scenario and entered CAS, we imported them from our library. Sadly, Cassandra and Alexander had to go in order to meet the household requirements but it was probably for the best. We’d be focusing heavily on their parents’ careers so the poor kids might have ended up being neglected. Interestingly, the game would not allow us to start the scenario if Bella and Mortimer were married. We had to set them as housemates but when we did start the scenario, they were married and both had the happy Just Married moodlet.

Just like the description said, Bella and Mortimer were both Assistant Managers in the Business career and had all the skills they needed for that current rank in the career. Even though this gave us a solid start, we still had a lot of work cut out for us. CEO is level 9 of the Manager branch and Angel Investor is level 10 of the Investor branch. Getting to the top levels of a career does take some time and dedication and we had to do it for two Sims. We always pick the most challenging outcome for these scenarios so we decided Bella would become a CEO and Mortimer would become an Angel Investor. Of course, we could have gone down the divorce route but that seemed like a bit of a cop-out. You could technically just divorce your spouse on the spot and instantly complete the scenario. A good way to make an easy 5,000 satisfaction points for your Sims but not as fun. Still, we appreciate the divorce option for the drama potential. 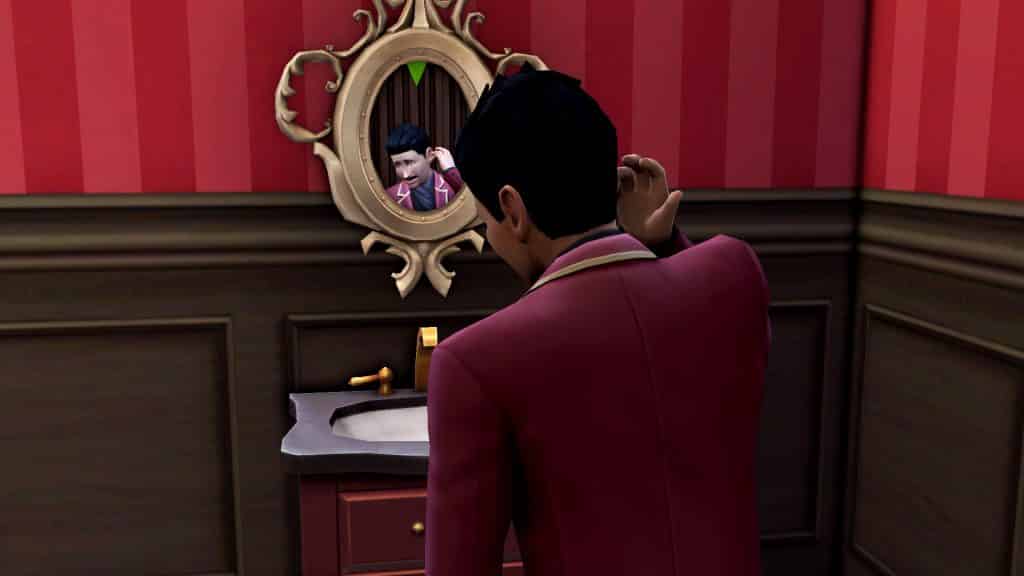 Since this was going to be a challenge, we decided to speed things along a little by permanently keeping Bella and Mortimer’s motives maxed out with MCCC so we could do a speed run for this article and just skill grind non-stop. They gained all of their skills without any cheats involved, however. They both had to file paperwork as their daily task so we bought them a computer. Logic and Charisma were the two skills they had to focus on. When Bella was doing paperwork on the computer, Mortimer was practicing his speaking skills in the mirror or playing chess and vice versa. We also made sure they were in the ideal emotion for those activities to build these skills faster. Pondering Moves at the chess board is a fast way to become Focused for the Logic skill. Brushing your teeth and psyching yourself up in the mirror are both fast and easy ways to become Confident for the Charisma skill. 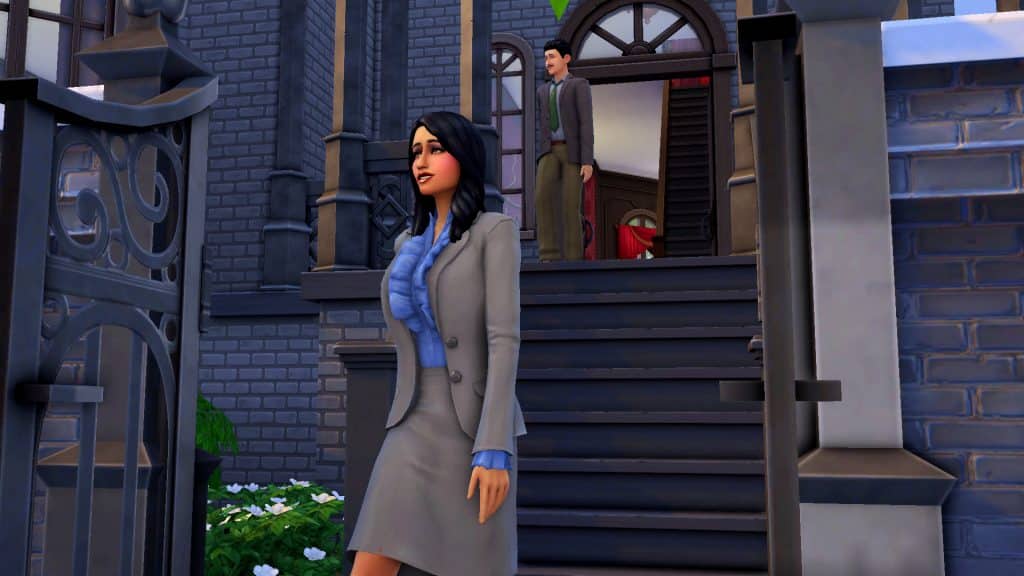 For a while, everything seemed to be smooth sailing. Bella and Mortimer had a routine going and they were regularly coming home with promotion after promotion. They both managed to become Senior Managers at the exact same pace. This race to CEO was neck and neck so far. Nothing could stop them… until Bella started feeling sick in the mornings and decided to take a pregnancy test. Bella has the Romantic trait so she becomes Lovelorn easily if she isn’t getting enough romance often enough but neither of them have a lot of time for romance with their demanding jobs. The fastest way to make the uncomfortable Lovelorn moodlet go away? A quick WooHoo with her husband. Frequent quick WooHoos with her husband. 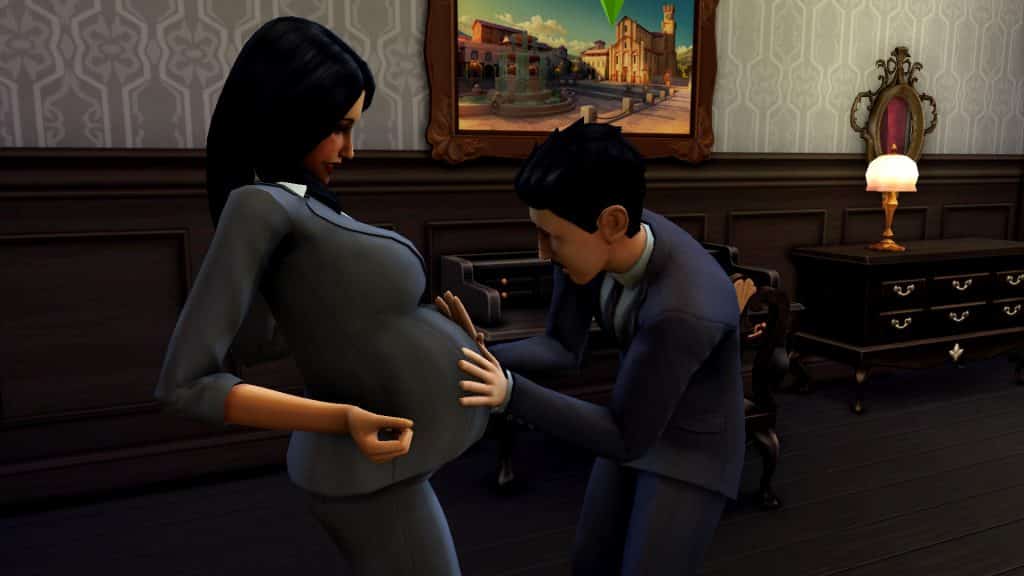 The pregnancy test came back positive! Bella and Mortimer were having a baby! It was a bit of a shock for them but they were happy, nonetheless. Bella had absolutely no plans to slow down or put her career on hold. Neither her nor Mortimer took any family leave and as soon as Cassandra was born (of course we named her Cassandra!), a full-time nanny was hired. They were delighted about the arrival of their daughter but nothing was going to derail their career ambitions.

Curiously, as soon as Bella became pregnant, Mortimer started receiving promotions faster than her even though she was working just as hard as her husband with just as high work performance and all skills and tasks completed. Yeesh, workplace discrimination exists even in The Sims? Lame…

But Bella bounced back quickly after Cassandra was born and eventually overtook her husband’s lead! We have to admit, this whole race to the top was starting to get exciting. And long. In fact, seasons came and went and Cassandra grew from a baby, to a toddler, and then to a child before we finished this scenario! 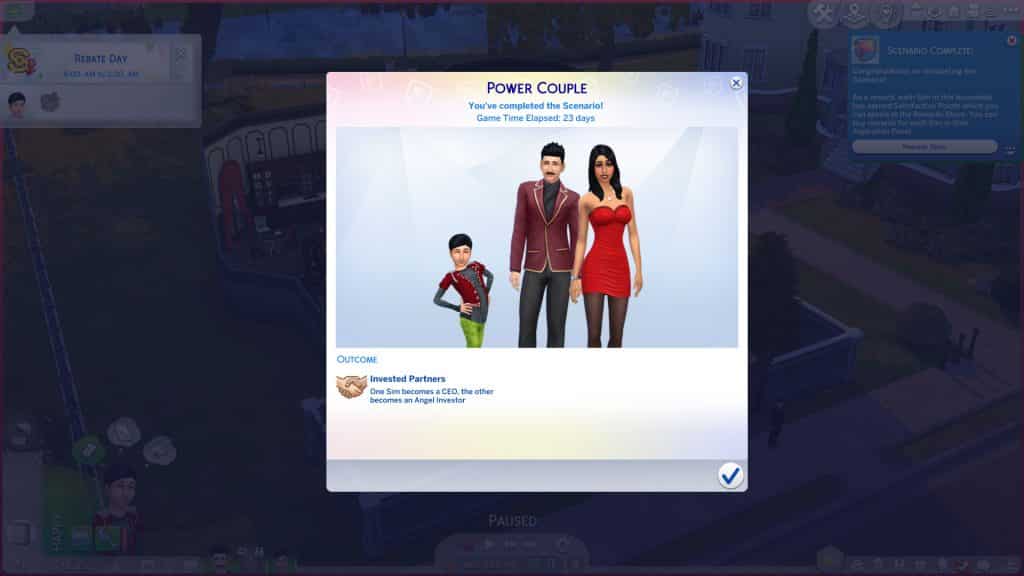 In spite of falling behind back when she was pregnant with Cassandra, Bella was the first to get promoted to CEO which technically makes her the winner of this marital competition. However, Mortimer went into the opposite career branch to become an Angel Investor, which is one level higher than CEO and he wasn’t far behind his wife in making it to the top of the Business career.

Honestly, we’d consider them both winners. They truly are the OG Power Couple of The Sims Series. 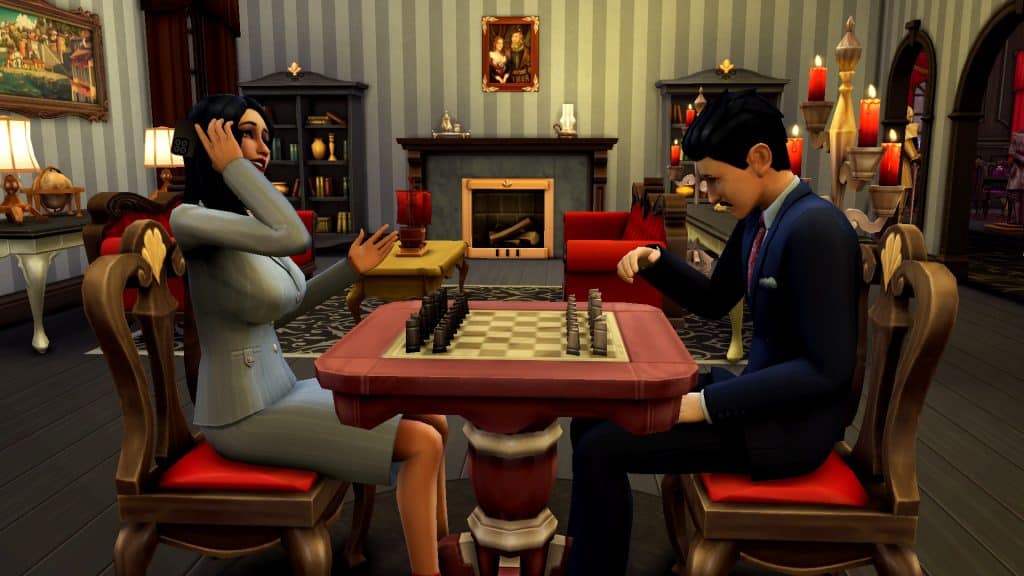 All-in-all, this scenario took us a whopping 23 days to complete, even doing a speed run with maxed motives! After a string of disappointing scenarios that were so easy, they weren’t even worth doing, we were so happy to finally play through a scenario with a decent challenge that kept us playing for a good long while.

Having to make it to the top levels of one of the most demanding base game careers with two Sims provided us with hours of entertainment. Even though we were speeding our way through it as fast as possible, it still took us a good chunk of time. This means that if we weren’t grinding, the scenario could have gone on even longer with more opportunities to develop our own twists and turns to the story. Both career-focused outcomes were a great challenge and gave players enough play time to really get invested in their Sims and maybe have some unexpected things happen along the way! Even the divorce option, which could easily just be done instantly, is a nice addition to the scenario for the element of drama it adds. Sure, you could just divorce your Sims right away, collect your satisfaction points and move on. Or you could really develop a whole story around it and have things eventually end in a messy divorce in spite of their best efforts to reach the top together.

This is honestly the first scenario we’ve gotten in a while that we could get excited about and recommend checking out. Especially because of the refreshing lack of glitches! Not only was the scenario fun and challenging in itself but it worked properly! Wow! Amazing! Truly revolutionary!