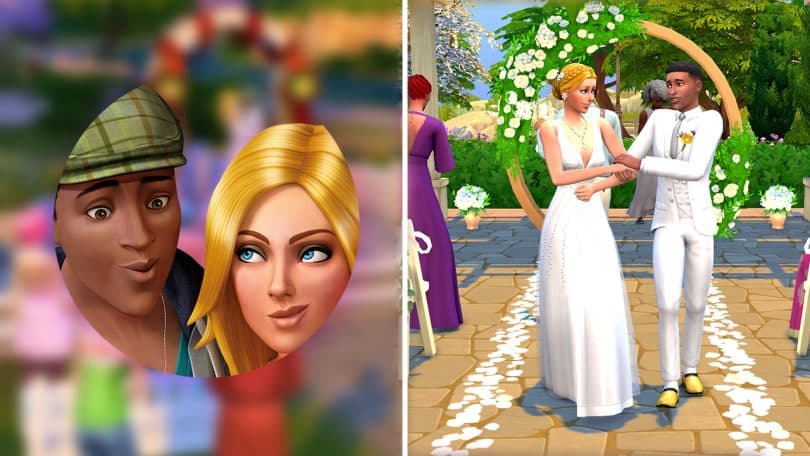 Babs and Ollie L’Amour finally got their Wedding Story told!

To celebrate My Wedding Stories finally getting fixed, we thought it would be fun to follow a newly engaged couple from proposal to their wedding day and tell their wedding story. Long-time players of The Sims 4 will remember Babs L’Amour and Ollie Purdue from the game’s early promotional trailers. Their love story has been featured in several of The Sims 4’s original promotional material, like this gameplay trailer: 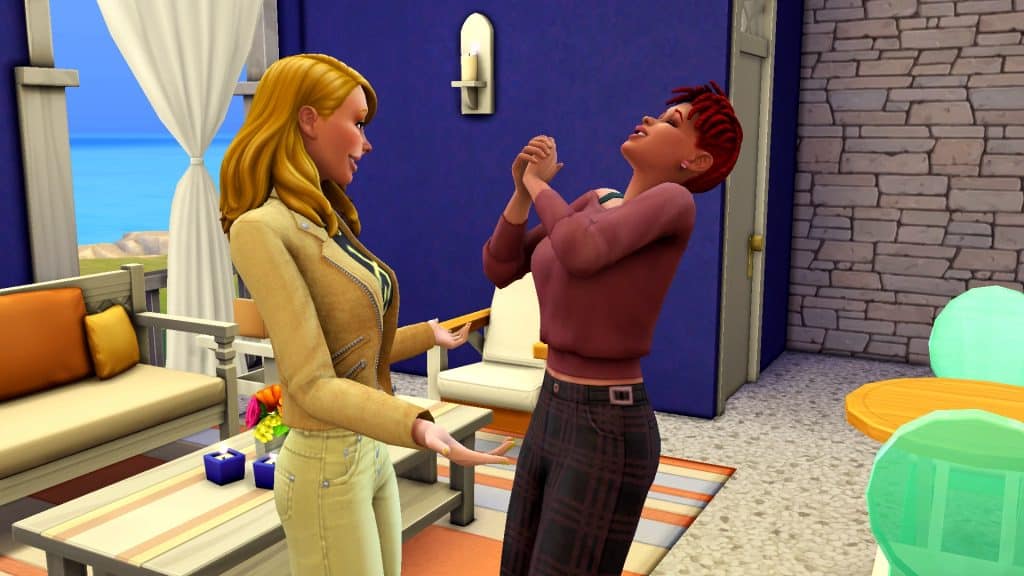 With The Sims 4 My Wedding Stories, engagements are no longer a simple matter! There’s so much planning to take care of! Who will be the Sims of Honour? The Flower Pal? The Ring Bearer? Do we want to have an Officiant at our ceremony? What wedding cake should we buy? We’ll need to taste test it first. Oh, and don’t forget the perfect cake topper for it! Come to think of it, have we decided on flowers, yet? Or a venue? Oh, and we’ll need to go wedding dress shopping, of course! And we can’t forget about all the pre-wedding events, either, like the engagement dinner, rehearsal dinner, and bach party!

Newly engaged couple, Babs and Ollie, are feeling a little overwhelmed by how much there is to do before the big day. They’ve decided to invite Ollie’s sister, Cassidy, to stay with them in Tartosa to help plan their special day. They’ve been living in Tartosa for a few months now and have made plenty of friends in town, including the Laurents, the Markovics, and the Sotos. Cassidy suggests they start by asking some of these friends to take part in their wedding. 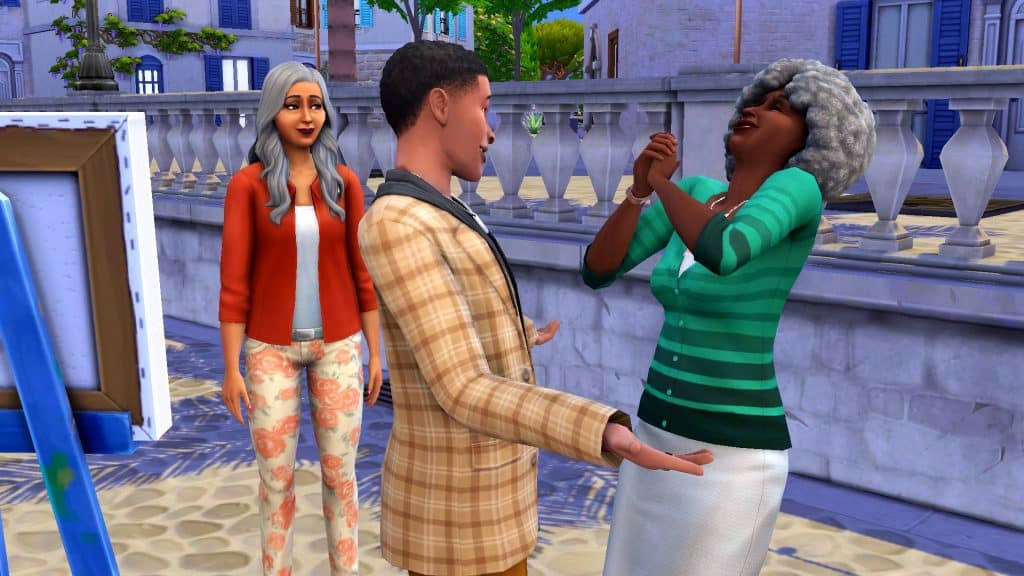 Of course, Babs is the first to insist that Cassidy be her Sim of Honour and Cassidy is very touched by the gesture. That’s one role filled. Ollie decides to take a stroll downtown where Dom is usually painting. He thinks she’d be a perfect Officiant. Luckily, Cam’s there, too so Ollie extends an invite to the wedding to her. Dom is honoured to officiate Ollie’s wedding and Cam appreciates the invite! While he’s there, he spots little Jace Laurent and his friend, Tomi Markovic, at the beach! Perfect! Just the young people Ollie wanted to see! They’re both very excited to be in Ollie’s wedding as the Ring Bearer and Flower Pal. Ollie tells Tomi to pass along the message to her dad that Ollie wants him to be his Sim of Honour. 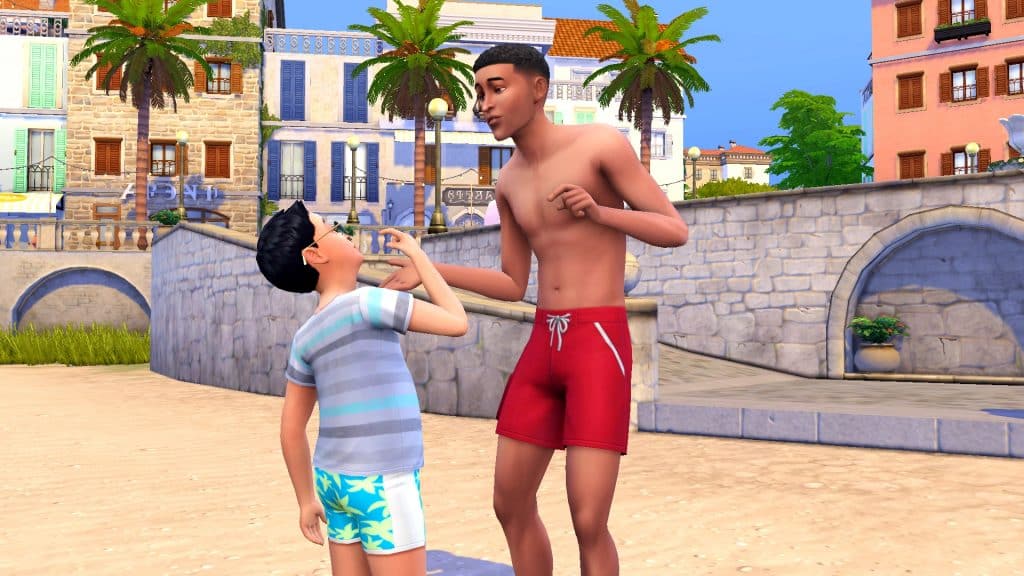 Phew! With all the roles out of the way, it’s time for the real planning to begin!

Dresses, Flowers, and Cake, Oh My! 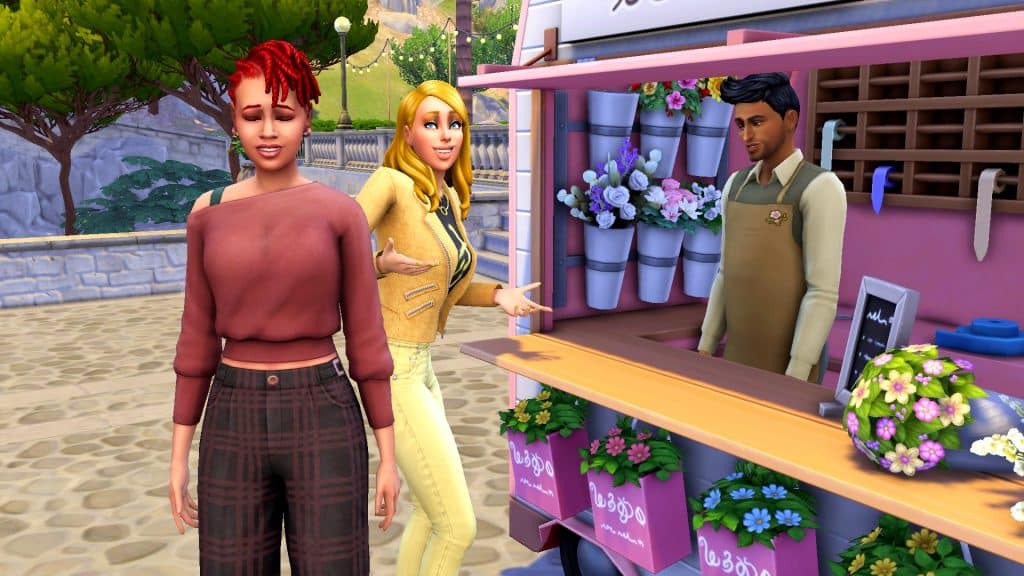 Babs and Ollie set aside a shopping day with their respective Sims of Honour. The plan is for the girls to pick out Babs’ wedding bouquet while the boys shop for tuxes, then the girls will hit up the boutique after the boys leave to try on wedding dresses. After, they’ll say goodbye to Mateo and Cassidy and meet up at the patisserie to taste a selection of cakes. It’s a busy day but it promises to be fun!

Babs has her heart set on a yellow theme for her wedding. She wants yellow flowers, yellow cake, gold jewelry to accent her gown, and the dress code for the guests will be yellow. Cassidy helps her pick out the perfect pale yellow bouquet to compliment the rest of the wedding’s colour theme.

Ollie was given strict instructions by his fiancée that whatever tux he chose, it could not be black and he had to have a yellow boutonniere. This wasn’t a problem for Ollie, who was an artist and an expert at colour matching. He and Mateo picked out a groom outfit they were sure Babs would swoon over, then they cleared out of the boutique to let Babs and Cassidy take over wedding dress arrangements. Babs found her perfect dress quickly because, like the wedding colours, she already knew exactly what she wanted. Nothing less than a princess dress would do for her special day! 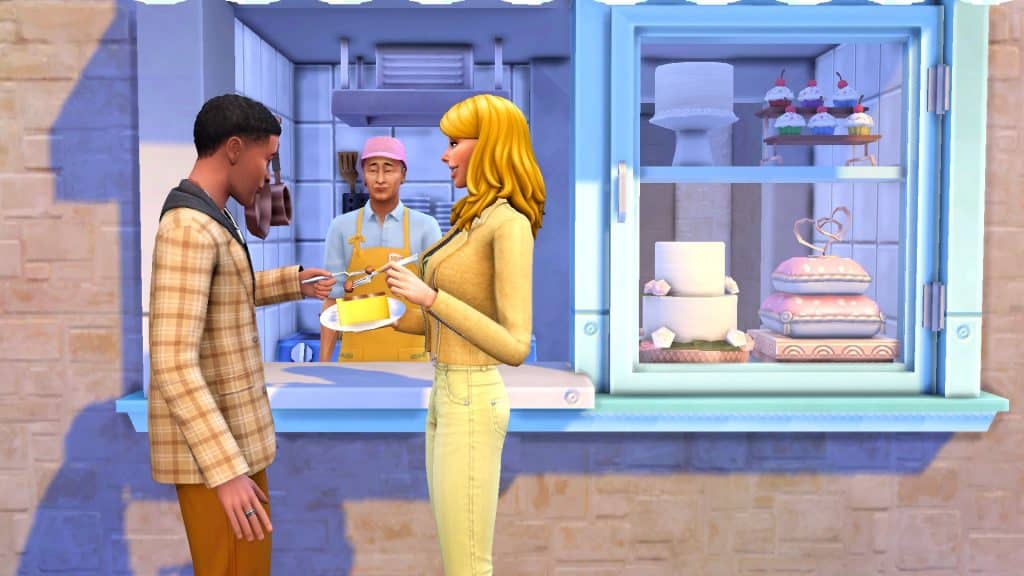 Later in the afternoon, Babs and Ollie bid Cassidy and Mateo goodbye and met with each other at the patisserie stand. Babs’ only request? Whatever cake flavours they tried, the cake itself must be yellow! Ollie could pick the flavour, however. She wasn’t picky about that. It’s cake. It all tastes good, right? They spent the rest of the afternoon feeding various samples to each other. There was some back and forth over the final decision but in the end, they agreed on a lovely three-tier gold and white cake with yellow roses. All that was left to do was choose the perfect topper and have it inscribed. 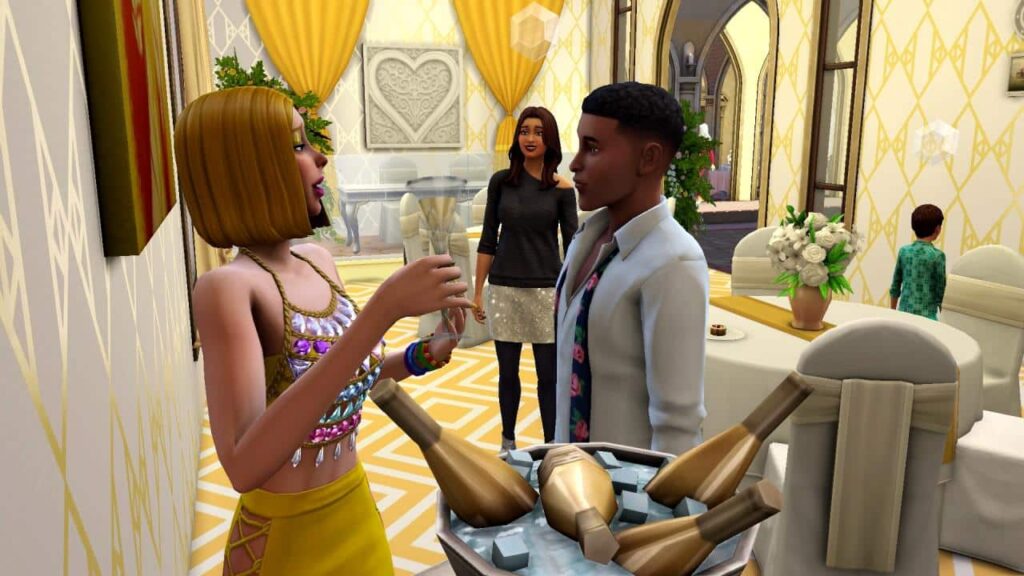 It was a good thing Babs and Ollie were proactive and got a lot of the planning out of the way early because the rest of the summer was a blur of one event after another! It’s funny how it’s customary to throw so many “mini-weddings” before your actual wedding, isn’t it? Oh well. Tradition is tradition so let’s kick off the pre-wedding celebrations with an engagement dinner! 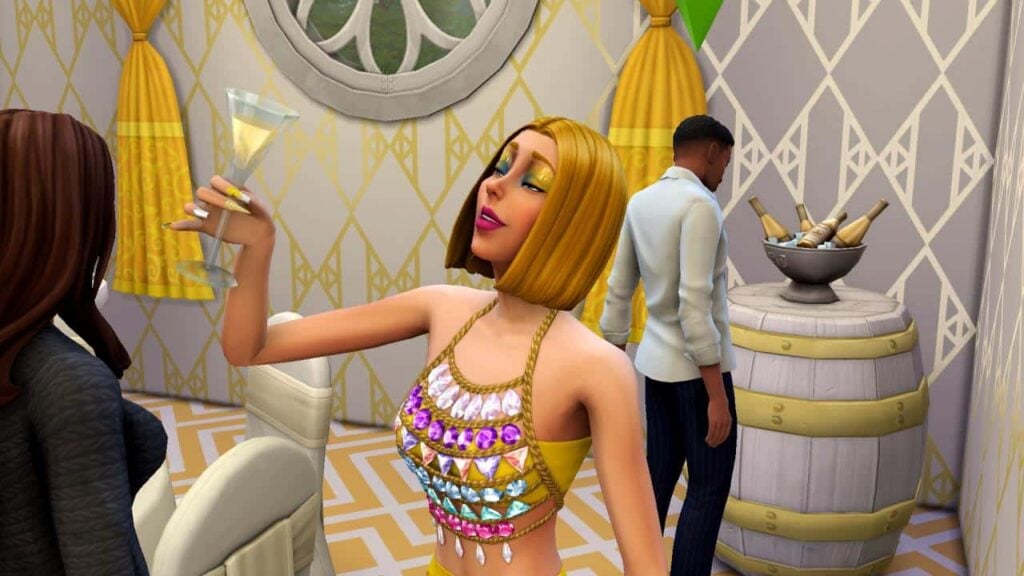 They invite the whole wedding party and a bunch of their other friends in Tartosa. Babs falls in love with the venue for the dinner and insists this is where they need to have their wedding. Everything is YELLOW! Ollie agrees. It’s a nice place and does fit the colour theme! The engagement dinner is a casual but fun affair with lots of food, toasting and drinks.

Babs may have enjoyed the drinks a little too much… 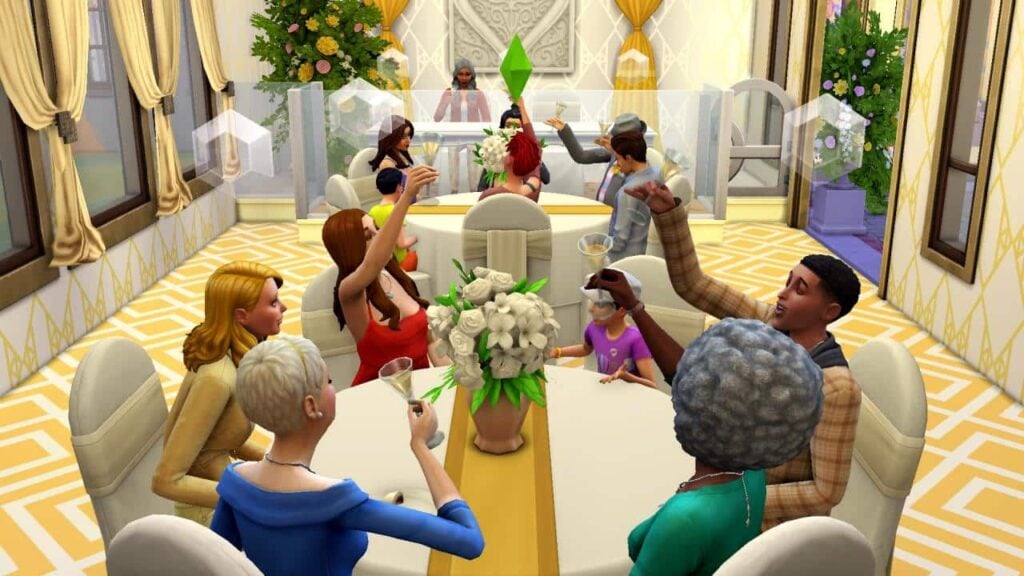 Luckily, she has a couple days to recover before the big rehearsal dinner. The rehearsal dinner is at the same venue since Babs and Ollie both loved it so much. The rehearsal dinner isn’t so much a rehearsal for them as just another excuse to eat good food and party but it’s a fun night all the same! Toasts, speeches, good food, and this time, there was dancing at the end of the night! Don’t dance yourselves out just yet, guys! Tomorrow night is your joint bach party!

Babs and Ollie aren’t into the whole idea of separate bach parties. Although Babs does have her fair share of commitment issues, she doesn’t see this as her last night of freedom as a single girl. Just the last night of this chapter in her life. Tomorrow, she gets to start a brand new one with Ollie! It’s exciting and she wants to celebrate with everyone, including her fiancé. Well, maybe not the kids. Tonight is adult’s night at the lounge. The drinks flow freely and the dance floor is jumping all night. As much as they’d love to party until dawn, they have a wedding tomorrow they don’t want to be hung over for so everyone calls it a night at around midnight.

It’s been a long journey but it’s finally here! Babs and Ollie’s wedding day! Nerves are high but so is excitement as everyone heads to the venue. Nothing could possibly go wrong today, right? Babs and Ollie made sure to plan every detail well in advance. The cake, the guest attire, everyone’s roles in the wedding party. Surely, everything would go exactly to plan, right?

Oh poor Babs and Ollie… Don’t you know weddings never go perfectly no matter how well you plan them? 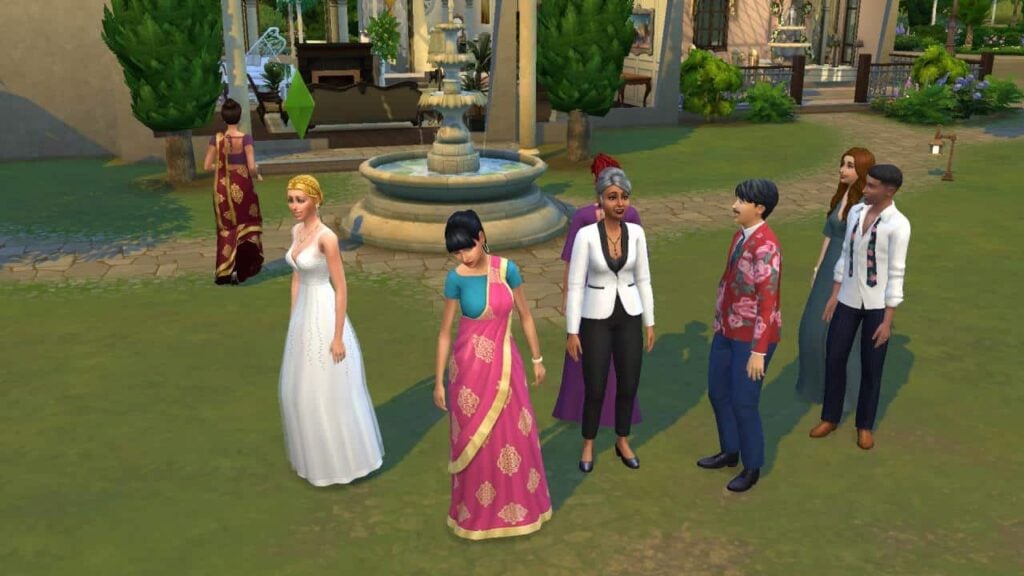 For one thing, Babs’ dress code requirements must have gotten lost in the mail because nobody, not a single person, wore yellow like she asked. Except for Jace, who wore a yellow t-shirt with a cartoon character on it and shorts. The dress code did say “polished” attire, didn’t it? Not only that but the cake they had selected for the wedding? Nowhere to be found! Had the cake company delivered it to the wrong address?! And where was their Flower Pal, Tomi?! She was nowhere to be found! Apparently, she’d come down with a bad cold the other day and had to stay home according to her parents. So there would be no Flower Pal at this wedding.

Before Babs could have a complete Bridezilla meltdown over her special day going all wrong, Mateo quickly got everyone seated while Cassidy made an emergency trip to a nearby bakery to get a replacement cake that looked similar to what Babs and Ollie had initially picked. Thankfully, the topper they’d had inscribed did not get lost. 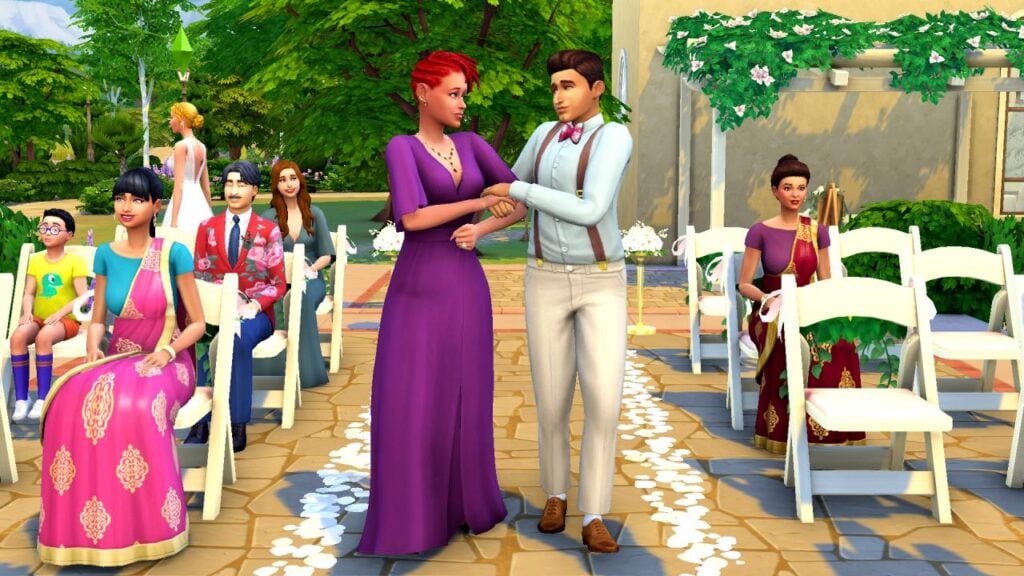 Everyone must have felt bad for the tearful bride because they were on their best behaviour and kicked off the ceremony right away. The two Sims of Honour were the first to walk down the aisle arm-in-arm. Sadly, there was no Flower Pal to go ahead of the bride and Babs was on the verge of tears, wondering how on earth the most important day of her life could be ruined like this… until she saw Ollie waiting for her at the altar.

Her special day wasn’t ruined. The most important part was still here and he was waiting for his bride. All of her worries melted away as she glided gracefully down the aisle… er, make that stumbled awkwardly down the aisle because she tripped on her own wedding dress! She caught herself before she fell and gave everyone a sheepish smile. Phew! 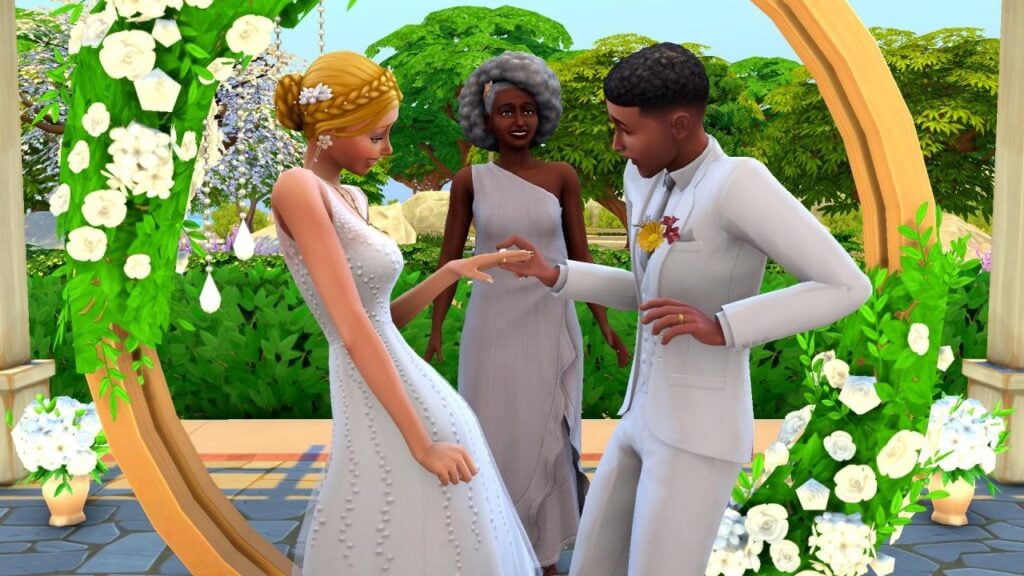 After Babs made it to the arch in one piece, Dom gave the most beautiful wedding speech that had everyone wiping away happy tears. She was definitely the right choice to officiate their wedding. Here came the big moment! The “I Dos” and rings! Ring Bearer, if you please… 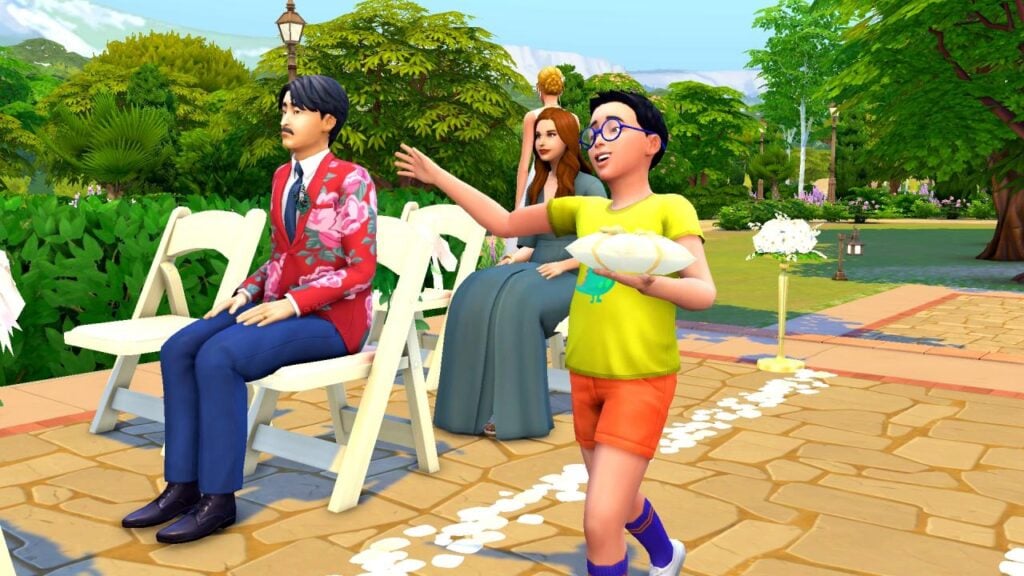 Babs and Ollie are officially Mr. and Mrs. Purdue and Babs is so overcome with relief that the hard part of the day is over that she sweeps her new husband off her feet with a very passionate spousal kiss! Awwww! They walk back up the aisle together, smiling ear-to-ear while everyone stands up and blows bubbles to celebrate!

With the ceremony out of the way, let the party begin! Food and drinks are served in the reception hall and the bride and groom can finally relax a little. At least until it’s time to cut the cake! Cassidy must have worked some kind of magic because the cake she came back with was picture-perfect! And delicious, too! Babs and Ollie cut the first slice together and share a bite with each other before everyone else eagerly digs in.

The two Sims of Honour regale everyone with speeches, recalling heartwarming and funny memories they have of the bride and groom. When everyone is thoroughly stuffed from dinner and cake, it’s time to work off some of those calories on the dance floor. Of course, it’s customary for the bride and groom to open the dance floor by sharing their first dance as a married couple. Babs and Ollie impress everyone with some fancy moves.

And we think that’s where we’ll leave Babs and Ollie to enjoy the rest of their night. We hope you enjoyed reading Babs and Ollie’s Wedding Story!