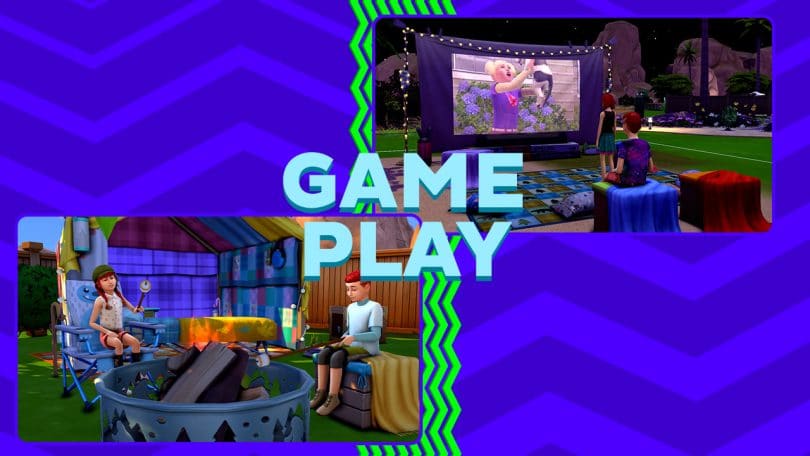 Little Campers is by far the most interactive Build/Buy Kit we’ve seen to date!

Little Campers is definitely my personal favourite kit we’ve seen so far! Not just because it’s the first kit to focus on children instead of adults but also because of how many functional objects it comes with, including new versions of different child toys that we haven’t had a revamp of in ages. Although Little Campers can’t really be called a gameplay kit, considering much of the “new” gameplay objects are updated versions of objects we previously had in the game, it still feels like the closest thing to a gameplay kit since Bust the Dust… which is still the only gameplay kit we’ve ever seen.

Seriously, The Sims Team. It’s been over a year since you introduced kits with the promise of gameplay, CAS, and Build/Buy kits to appeal to all players. So… where are the gameplay kits???

Ahem. Anyway, let’s dive into the Little Campers kit and check out all the functional items that our kids and toddlers can enjoy playing with!

We’ve had swings in Seasons and Island Living but for players who don’t own either of those packs, the Little Campers kit will be their first time playing with a swing set! Like the other swing sets, these swings can be used by both children and adults. Sims can swing by themselves, swing with a friend, or be pushed on the swings by another Sim. There is a risk of kids becoming nauseous if they stay on the swings for too long. The design of this swing set is definitely my favourite of all the swing sets in the game. The lattice frame and faerie lights with the pillow chairs and rugs underneath really make this object feel fresh and new.

This is another object that previously came in another pack but has been brought back in this kit. Players who don’t own the Outdoor Retreat game pack will no doubt enjoy having a brand new fire pit in their games! This fire pit is functional but does not have the full range of interactions available on it that the Outdoor Retreat fire pit does. The Sims Team wanted to be thoughtful about what functionality from past packs they chose to bring forward into future content so the Little Campers fire pit only has functionality directly related to the backyard camping experience. Sims can hang out at the fire pit and roast marshmallows on it but all other fire pit interactions remain exclusive to Outdoor Retreat.

Of course, players who do own Outdoor Retreat will have the full range of interactions available on the Little Campers fire pit.

Children cannot light the fire pit; that would be pretty dangerous but after an adult lights it for them, they can hang out with their friends around the fire and roast marshmallows to snack on.

This adorable bedsheet projector screen strung with faerie lights is not only a super cute addition to the backyard but it’s a functional television, too! Like the fire pit, The Sims Team wanted to preserve new gameplay features from past packs, so all the regular TV channels are available to watch on the projector, but movies still remain exclusive to the Movie Hangout Stuff pack. Players will only be able to watch movies on the projector if they have Movie Hangout Stuff installed.

We recommend watching TV on the projector at night; that’s when the picture on the bedsheet shows up the brightest and clearest!

That huge DIY cardboard rocket ship we saw in the preview images? Yep, it’s a new dollhouse! It’s been a very long time since we’ve gotten a new dollhouse design to play with and this homemade version is a super unique take on this object and so, so cute!

Dollhouses can of course be played with by both children and toddlers and adults can play dolls with a child or toddler, too. We were delighted to see that this gigantic thing was not just a decorative waste of space and is actually something our little Sims can have fun with.

We have gotten a decent variety of different activity tables in various packs but we sure as heck aren’t about to say no to a new one! Especially something as cute as this cardboard truck with headlights that actually light up in the dark!

The activity table is usable by children only and like other cross-pack items, kids can draw at the activity table but they will only be able to make seasonal crafts on it if Seasons is installed.

At first glance, it seems like The Sims Team accidentally gave us two identical patio tables but not so! One of those tables is, in fact, a games table! Children and older Sims can get together to play cards and for players with the Get Together expansion pack installed, they can enjoy an intense game of Don’t Wake The Llama at the games table, too!

I’m sure we all knew this adorable Bigfoot was a functional stuffed animal to build our little ones’ Communication and Social skills. We have gotten a few different varieties of this stuffed animal in different packs but we’re always happy to get a new one! The Bigfoot design pairs well with the backyard camping theme of this kit.

The stuffy is of course usable by both children and toddlers.

They might have been easy to miss since they’re so small, but the Little Campers kit does come with a new toy box toy! There are a variety of different forest ranger and forest monster designs for the toy. It can be stored in any toy box and both children and toddlers can play with it to build their Imagination/Creativity skill. If Parenthood is installed, playing with the toy will also build the Emotional Control character value.

Functionally, this is any other stereo in the game. You will be able to listen to any radio stations that come with the base game and any packs you own, dance to the music and everything else you can normally do with a stereo. Owning additional packs like Get Together or Jungle Adventure open up extra options such as building the Dancing Skill and dancing the RumbaSim with high enough Selvadoradean Culture skill.

Although it’s no different from any other stereo in the game, it’s still worth a mention because it’s the first stereo we’ve gotten that visually suits a child-like theme and would fit really well in a child’s bedroom or playroom.

This cute-in-a-slightly-unsettling-way statue? Yep, it’s a garden gnome! This smiling little guy holding up a big marshmallow standing on a smore can be named and put in your inventory like all his other gnome pals.

For players with Seasons installed, he will poof around the lot and can be kicked or given offerings on Harvestfest (or any holiday with the Holiday Gnomes tradition assigned to it).

The Little Campers Kit is available now for both PC/Mac and consoles! It is priced at $4.99 USD or your country’s equivalent currency.