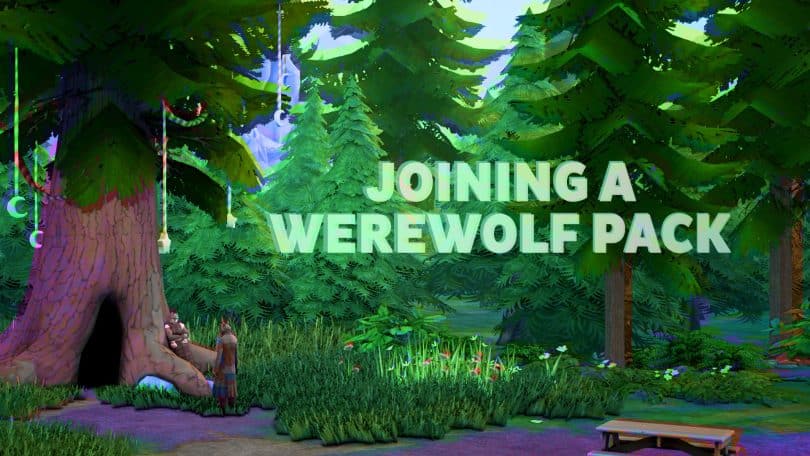 Join a werewolf pack, rise to the top, and form alliances and rivalries with the opposing pack in town!

In The Sims 4: Werewolves, your Sims can befriend and join one of two new werewolf packs in Moonwood Mill; The Wildfangs, and The Moonwood Collective. Each pack has its own set of values and expectations for its members and being a good member of the pack will allow you to rise in their ranks. When you grow powerful enough, you can even challenge the pack’s alpha for dominance. If you win, you become the new alpha of the pack, gaining greater control over the pack’s members.

Let’s dive into everything you need to know about werewolf packs!

You don’t need to be a werewolf to become friendly with a werewolf pack. Just find the leader of the pack and befriend them, then ask them to become a friend of the pack. Becoming a friend to a pack essentially makes you that pack’s ally. You’ll be able to use their hangout to rest, wash up, and use the washroom and you can drop off gifts for the pack at their hangout. You can also hang out with the pack members at the hangout. You’ll get some new friendly socials relating to werewolf packs with the pack members, too.

If you are just starting the game on a fresh save, the Wildfangs pack alpha will be Rory Oaklow. The Moonwood Collective pack alpha will be Kristopher Volkov. If you’ve been playing on that save for a while with Neighbourhood Stories enabled (or the Master Command Centre mod), it’s possible the alpha may have changed. If the alpha of a pack is in the area, you can click on the pack hangout and select Focus Camera on Pack Leader to locate them easily.

You must be a werewolf in order to fully join a pack and become a member. You must also already be a friend of the pack.

Ask to join the pack under the Werewolf Pack social options. When you ask to join a pack, you will have to complete three trials in order to be initiated into the pack. The trials are not very difficult; just like having to find motes to convince a Sage to turn you into a spellcaster in the Realm of Magic pack, the werewolf trials are more for storytelling than a serious gameplay challenge.

You’ll be able to choose which three trials you want to do from a larger selection. Both packs offer the same trials to choose from:

At lower werewolf ranks, the three easiest trials to complete are Demonstrate Scavenging, Give an Uncommon or Rare Collectible, and Give Excellent Quality Food. You can purchase the Scavenger ability right away at the Pup rank, which gives you the ability to scavenge collectibles pretty easily. To cook an excellent quality meal, just have your Sim cook a simple level 1 dish while Inspired.

Once you’ve completed three trials, you can officially ask to join the pack and you’ll be a full-fledge member.

While you can be a friend to both packs at the same time, you can only be a member of one pack at a time.

Both werewolf packs have a series of ranks members can aspire to. Becoming a higher rank in your werewolf pack will give you seniority over members of a lower rank and unlock new reward objects in Build/Buy. Each pack has different unlockable items.

There are four ranks in each pack, with Omega being the lowest rank and Alpha being the highest, making you that pack’s leader. You can have multiple Omegas, Deltas, and Betas in a werewolf pack but there can only be one Alpha.

To rise in the ranks, do activities that align with your pack’s values. We found an easy way to gain ranks quickly is to just contribute everything you find to your pack’s resources but you will still need to make sure you’re doing all of the pack’s required tasks on a regular basis. If you fail to keep up with your pack duties, you will be put on probation and can even be kicked out of the pack for not pulling your weight. Even the Alpha of the pack can be challenged for their spot as leader if the pack thinks they aren’t doing enough to be a good role model for the pack.

You can rise all the way to the rank of Beta by upholding your pack’s values but to become the Alpha, you will have to challenge the current Alpha to a brawl or tug-of-war. If you win the fight, the Alpha gets demoted to a Beta and you become the new Alpha of the pack.

Being the Alpha of a pack gives you greater control over all other pack members. You decide who can join the pack and who needs to leave. You can demote, promote, praise, and reprimand all the other pack members, and you can choose between three different decoration styles for your pack’s hangout (Friendly, Intimidating, and Neutral).

To see your status in your pack, click the werewolf icon in the social groups tab.

The Moonwood Collective are a civilized group of werewolves who believe in exercising restraint over their animalistic urges. They aim to bridge the gap between humans and werewolves and dispel the harmful myth that werewolves are violent brutes. They want to live peacefully alongside humans and be accepted among them.

The Wildfangs believe that no werewolf should have to hide who they truly are and embrace living their animalistic lives to the fullest. They fully endorse giving in to your beastly nature and running wild and free! Who cares if you scare a few humans in the process? They can get over it. The Wildfangs value self improvement and spreading the wild freedom lycanthropy offers all over the world.

Even though the Wildfangs and the Moonwood Collective have opposing views and values, they start out with a neutral relationship with each other. Depending on how you choose to interact with members of the other pack, this relationship can change for the better or for the worse.

Being friendly with members of the other pack and fostering good relationships with them will form an alliance between the packs. When the Wildfangs and Moonwood Collective are allies, the pack members will be friendlier towards each other and pack mate gifts can be exchanged between them. If you are the Alpha of your pack, you can have an Alpha-to-Alpha Talk with the other pack’s Alpha to help foster good relations. You can also approach the other pack’s Alpha to break the alliance if you don’t want to be friends with them anymore but beware! Breaking an alliance will start a rivalry!

Using Mean socials to members of the other pack, or breaking a previously-formed alliance will result in a rivalry forming between the two packs. While the Wildfangs and the Moonwood Collective are in a rivalry with each other, the pack members will be mean to each other and become Tense whenever the other pack is around. The Alphas of the two packs can still have an Alpha-to-Alpha Talk to try and bridge the gap between them but it won’t often go well. You can talk to the other Alpha to end the feud if you want to try and foster better relations. If you end the feud, the packs’ status with each other will become Neutral. You’ll need to continue to foster good relations and mend the animosity to improve relations further into an alliance.