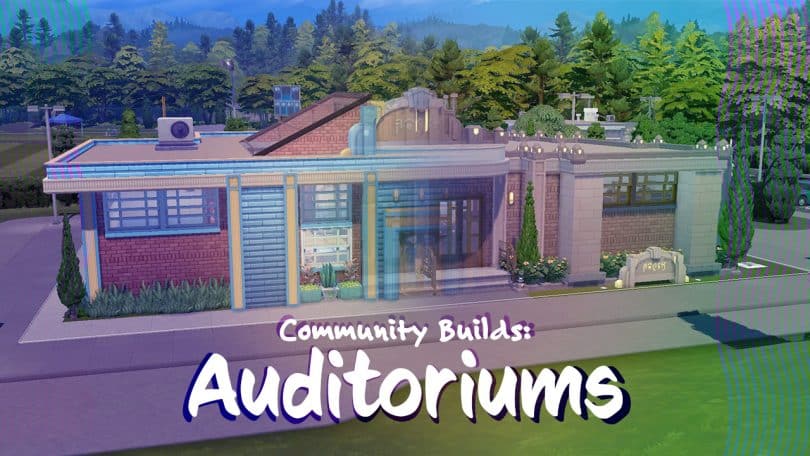 We’re showing off some amazing auditorium builds by talented creators!

In The Sims 4 High School Years, teen Sims can attend a variety of events at the auditorium located next to the high school in Copperdale. The auditorium is a special lot type that cannot be placed anywhere else in the game but players can edit and rebuild on the lot.

The auditorium is a dynamic lot, meaning it has different states it changes to depending on which event is currently active there. There are four states: default, formal dance, career day, and graduation. Each state gets uploaded to the Gallery separately so it can be hard to track down every state you need of the same build.

We’ve made the search a little easier for you by collecting a few of our favourite auditorium builds from the Gallery in multiple states, which will all be linked for you! To place every auditorium state in your game, just go into build mode on the auditorium lot and make sure you select the state you want before placing down that version of the auditorium.

This auditorium build by 10kiwii01 keeps the same general style as the original auditorium but gives it some dimension and personality on the outside by changing up the shape and adding more architectural detail. The inside is decorated much more nicely for each event and this build comes in all four states!

This colourful auditorium gives us Roaring Heights vibes and fits right in with Copperdale High’s art deco theme. It’s a bright, inviting space for your teens to celebrate all kinds of important milestones in their lives and the interior is just as beautiful. This build also comes in all four states!

This auditorium in cream and light blue brick really looks like a real-life auditorium or community centre. We’re loving the covered entryway and large lettering on the front of the building. This build comes in all four states, too.

This sleek, modern auditorium with angled walls looks fantastic! We’re sure any teen Sim would be excited about attending their prom or graduation in such a nice venue! This build only comes in three states; there is no default version but players can easily delete all the objects inside one of the other states to have a basic version.

This is another ultra-modern auditorium with unique architecture. We absolutely love the curved roof pieces and curved wraparound windows. What an impressive place to celebrate your prom or graduation! This build comes in all four states as well!