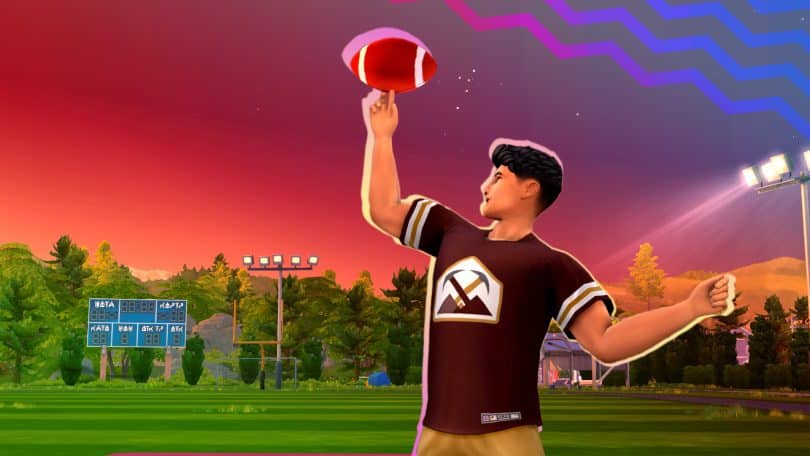 Everything you need to know about how to become Football Captain of your high school!

We’re going to be walking you through joining and excelling in the Football Team!

Football Team runs from 3:30pm to 5:30pm on Mondays, Wednesdays, and Fridays. Football practice is treated like a rabbithole career but there are plenty of active elements to being on the Football Team. Make sure your Sim is at home and not at school when football practice starts so they can leave the lot to enter the rabbithole destination.

The Football Team has three promotion levels and each level comes with new rewards.

The Football Team Sports Day event happens in the football field behind the high school every Thursday between 5pm-10pm. Since there’s no football practice on Thursdays, it won’t interfere with the after-school activity.

Anyone can attend the event and participate in the football toss competition; you don’t have to be on the Football Team.

When you arrive at the school after the event starts, there will be banner archways emitting fireworks, photo backdrops, a vendor, one group cheer mat, several footballs, two picnic tables, and a podium. The main activity at this event is the football toss but Sims can also take selfies and pose for pictures in front of the backdrops, purchase football outfits, school merch, and drinks and snacks, and dance to music.

To join the football toss, click on any football at the event or in your inventory and choose Normal or Difficult practice with any other Sim there. Try to make sure you pick a Sim with high Fitness skill, as their performance will also affect your score. When you’re finished, find the Sim with the Competition Judge role in red above their head. Click them and select Submit Competition Score.

At 9pm, the judge will step up to the podium and announce the winners. You’ll be notified whether you won or not. Winning seems to be random since our two Sims with level 10 Fitness didn’t win and weren’t able to pull off a perfect throw even though both were in a good mood.