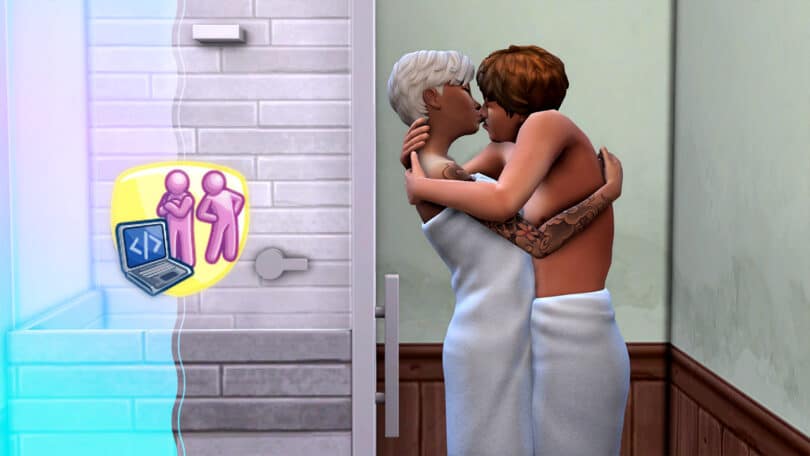 Playthrough of a very fulfilling Scenario with unexpected features!

The latest update for The Sims 4 has added three new permanent scenarios to the game; Stuck in Their Shadow, New in Town, and Parenting Predicaments.

Here’s how our playthrough of the Stuck in Their Shadow scenario went!

This scenario is a bit different from previous scenarios we’ve had; in fact, it’s quite refreshing! This scenario leaves a lot more room to play your own way, offering optional goals you can complete or ignore in order to go down different paths. The choices you make determine what your bonus reward will be at the end of the scenario. You can now also see the potential rewards when you start the scenario. Oh, and you’ll be playing with a premade household for this scenario; a single Sim named Nova Curious.

The description states that Nova has just graduated college and is ready to start an exciting new career in the tech industry; she’s also relieved to finally be rid of her old college rival, Lewis. However, she finds out to her dismay that Lewis also works at her new job! You decide whether Nova finally outshines Lewis or repairs the broken bridge between them.

The goals for this scenario are far more intricate than previous scenarios. There are different stages of the scenario and in each stage, your choices will affect how future stages play out so we can’t really give a full breakdown of every goal like we usually do. However, we can break down the potential endings and rewards.

When we first start out with Nova, she has a laptop and a telescope in her inventory, along with quite an array of mid-level skills. We moved her into StrangerVille because any OG Simmer knows that’s just where the Curious family belongs.

The first stage of this scenario is just to launch her career, which is pretty linear and straight forward. The goals are to join the Tech Guru career and to place her laptop. So we did just that. Easy peasy. Nova started at level 4 of the Tech Guru career, presumably due to her post-secondary education. As soon as she joined the career, she got a new goal to get promoted and to receive a “mysterious” phone call…

The phone call is from yup, you guessed it… her old frienemy, Lewis. He wants to inform her that he also got hired at her job, that he will once again be way better at it than her, and to call her a tuna head. I don’t know what a tuna head is, Lewis.

Naturally, his phone call made her angry so a new goal to calm down appeared which she handled by calming down with a mirror.

Once her head was clear, she had to become focused. Good thing she has a telescope. I popped it onto the roof of her trailer for her and she easily became focused from stargazing.

Then she had to raise her Programming skill to level 4 which was also fairly simple since she started at Programming level 3.

This was where the scenario started to get a little interesting; Nova had four optional goals in this stage; lock her computer, keep her needs satisfied, go outside, and unwind with a hobby. I opted to do all four since those are fairly simple to do. I had her use the telescope again for the hobby which gave me another optional goal to return the telescope to her inventory.

Set Nova Up for Success

Once Nova did get that first promotion, I made it to the next stage of the scenario! Now her goals were to get promoted again and complete a daily work task. She also had an optional goal to mod a video game.

At this point, Lewis calls again to tell her he just got promoted, too, and he’s sooo much smarter than her because he used his bonus to buy better stuff that will keep his needs met and make him more productive. Obviously, Nova now has to show him up so she gets some more optional goals; buy a bed with an energy rating of 6 and buy a shower with a hygiene rating of 7. Once she buys these items, she gets another optional goal to buy a voodoo doll? Dang, this scenario is starting to get really interesting!

Okay okay, back to work. Nova does her daily task which gives her a new goal to go to work feeling confident. This is easily achieved by just brushing her teeth and psyching herself up in a mirror before her shift starts. Going to work while confident gives her another optional goal to buy a new reward trait. Don’t do what I did and foolishly buy just any trait; it has to be the Night Owl or Morning Sim trait. I didn’t have enough points left to buy the right trait after wasting them so I never got to complete that goal. Who knows where it might have led?

After Nova’s next promotion, she graduates to the third stage of the scenario, which is to deal with Lewis. Her new goals are to wait for a call about lay-off rumours and distract herself with a hobby (optional). Yikes…

Shortly after, Lewis calls. The rumours are true but he’s the one who got fired, not you. The company felt he had a bad attitude. In the wise words of Nelson Muntz… HA-HA! Anyway, getting fired made him realise he’s been a huge jerk to you so he wants to come over and talk. You can let him come over and call him a tuna head (again, not a thing), or you can demand he bring pizza as an apology. I obviously demanded pizza.

At this point, you can either be friendly or mean to Lewis. I chose to be friendly because I wanted to see where that path would lead. Because I asked him to bring pizza, I had the optional goal to call him to the pizza for a meal… except he never actually brought any pizza so I had to order one myself to complete that goal. Thanks, Lewis. Appreciate it.

In fact, there are a lot of optional goals at this point. Once I chose to be nice to Lewis, he asked me if he could stay the night while he got his life sorted out. The only required goal is to let him stay or kick him out. The optional goals were to flirt with him, bind the voodoo doll to him, and instill him with false confidence. I did all three.

So what did Nova do? Heck yes, she WooHoo’d Lewis! That hilariously led to a goal to criticize his WooHoo technique which I did not do. At this point, I was actually kind of starting to like Lewis. He seemed like he really turned his attitude around.

You also get an optional goal to reconnect with Lewis here. If you do this, you actually learn more about Lewis and Nova’s history, which is pretty cool. Lore enthusiasts will definitely want to do that goal.

In the end, I decided to let Lewis stay overnight. It’d be kinda rude to WooHoo with him and then kick him out. Once you either let him stay or kick him out, you get a goal to go to sleep, which will end this stage of the scenario.

Team Up With Lewis?

Lewis was very grateful to Nova for letting him crash at her place. He apologises for being a tuna head (whatever that is) and gives Nova a space print. Nova’s goals are to hang up the print and enable the emotional aura on it which she does. Her two other required goals here are to get another promotion, become friends with Lewis, and reach Programming level 6.

Once she became friends with Lewis, he approached her with a business proposal. He wants to team up with her to make an app or video game and become indie developers. I was sorely tempted to tell him no; she just worked her butt off to get all those promotions! But I was determined to keep things going with Lewis so I had Nova agree to quit her job and become an indie developer with him.

Lewis gives her 5 glasses of this mystery concoction he’s made to make you gain skill crazy fast… and also send you running to the bathroom. Okay Lewis, you’re starting to look pretty shady again but I will conveniently not ask about the legality of what’s in this beverage.

Now Nova’s goals are to reach Programming level 7 and make a video game or app. Her optional goals are to drink the… Snaggle Fluster??? and quit her job. Nova drinks the questionable drink and starts programming while “snaggle flustered.” While she’s working on this new app, Lewis autonomously asks her to be his girlfriend. Well she darn well better be after all she’s done for you! She and Lewis start dating.

Nova Has It All

Sadly, this scenario did not tell me how long it took to complete but it did give me lots of other cool info! For one thing, there appears to be a “hidden” ending not listed on the main menu and I got this ending! Apparently, you can keep your job, become an indie developer, and fall in love with Lewis! This hidden ending appears to be the ending you get if you follow all available paths and get all the other endings. Cool!

Nova got the Highflier trait for completing the scenario and her bonus reward was the Seldom Sleepy trait, which is super expensive to buy in the Rewards Store and also super useful.

Holy smokes! This scenario was a wild roller coaster ride from start to finish with so many twists and turns and alternate paths! I LOVED IT! Even though the scenario is designed to teach new players some of the game mechanics, I was not bored at all as a veteran player. I was super invested in the whole story unfolding and the character development. The rewards are MUCH better than in past scenarios, too.