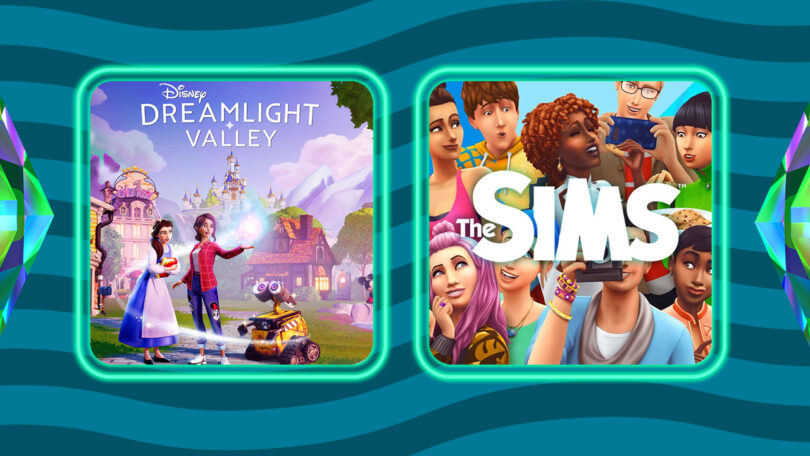 Eliza Pancakes VS Ursula: ROUND 1!

Disney Dreamlight Valley is the latest officially licensed Disney game by Gameloft to come onto the life simulation scene. It launched in early access on September 6th for people who purchased a founder’s pack but will eventually launch as a free-to-play game sometime in 2023.

I purchased the ultimate edition founder’s pack because I have zero self control and had the pleasure of being one of the first to play it yesterday. I became obsessed almost immediately and I attribute a lot of that obsession to the fact that it scratches my Sims itch and provides other gameplay that The Sims doesn’t have. So to me, it’s the best of both worlds!

So let’s talk about what makes Disney Dreamlight Valley similar and different from The Sims! This article is not meant to compare the two in any competitive way. It’s simply an exploration of two similar games that I happen to enjoy!

And yes, I know Animal Crossing can also be compared to Dreamlight Valley; however, this is a Sims fansite, not an Animal Crossing fansite so I’ll be focusing on The Sims here.

Dreamlight Valley and The Sims both feature pretty powerful customization tools! We can design our avatar/Sim the way we envision them and dress them in a wide array of beautiful clothes, accessories, and makeup. Likewise, we can also furnish and decorate our home to make it truly ours.

Dreamlight Valley takes customization a step further by allowing us to add our own custom designs to our clothes and allowing us to customize the entire town we live in; both things that we cannot do in The Sims 4 but The Sims 4 does have an edge over Dreamlight Valley with more powerful body and face customization options and the freedom to build our dream home from the ground up instead of just decorating an existing space.

Just like Mickey Mouse is an icon in the world of Disney, so is Bella Goth in the world of The Sims. Diehard fans of both Disney and The Sims will instantly recognize many familiar faces from past titles when exploring The Sims 4 and Dreamlight Valley. For new players, it’s an opportunity for the player to discover new faces; for veteran players, it’s a delightful reunion of all your favourite fictional people.

Both Dreamlight Valley and The Sims 4 are alternate universes, too! So you’ll find Disney characters from many different films and series all in one place, just like you’ll find well-known Sims from previous Sims titles all in The Sims 4 despite chronological timeline discrepancies.

Fishing and gardening are guaranteed ways to get rich in The Sims 4 without ever actually having to hold down a job. The same is true in Dreamlight Valley which is an especially good thing because… there are no jobs in Dreamlight Valley. Everyone spends their days tending their gardens, fishing, and foraging for what they need and when they have too much of something, Goofy’s always willing to buy your goods from you at his stall for some star coins to spend on valley upgrades and neat stuff in Scrooge McDuck’s store.

Even though there is a storyline to follow in Dreamlight Valley, there is nothing stopping you from just taking a break to do whatever you want for as long as you want. It can be as much of a Sims sandbox experience as you want it to be once you’ve played through the first few quests to get the essentials up and running.

As for your job? Well, your only job is to save the Valley from the Forgetting, which brings us to our next point.

This is where The Sims and Dreamlight Valley diverge from each other in a very significant way. While The Sims 4 does have optional scenarios and certain DLC packs that are more story-based with specific tasks you need to complete in order to advance the story, it has always been and remains to this day, primarily a sandbox experience.

Not so in Dreamlight Valley. As mentioned, you can certainly play in a sandbox style. Nothing forces you to continue the story. I spent hours doing nothing but fishing and tending crops to sell to Goofy yesterday, but you’ll get the most out of the game if you participate in the monthly events and complete quests. In fact, it’s necessary to unlock certain essentials, like Remy’s restaurant and Scrooge McDuck’s store. You’ll also need to play through the quests to unlock new areas in the game and meet new characters.

So while Disney Dreamlight Valley can be a sandbox if you want it to be, you’ll probably find yourself doing some questing to open up new things in the game.

Since Disney is a family-friendly franchise that caters to small children as well as adults, it’s safe to say that Disney Dreamlight Valley does not allow you to build romantic relationships, get married, or have children. This is an aspect of The Sims that is completely nonexistent in Dreamlight Valley.

Because of The Sims 4’s T rating, it has more freedom to explore more adult themes. Therefore players can fall in love, WooHoo, get married, and raise a happy or dysfunctional family as they please.

As a huge family player, I think I will always want to play The Sims for this reason alone; however, I’m not disappointed by its exclusion in Dreamlight Valley. It makes sense for the type of game it is and its target demographic, plus its emphasis on building friendships is equally as fulfilling and rewarding for me as a player.

So which game is better?

Neither, silly! It’s not a competitive comparison, remember? They’re both awesome in their own right. Their similarities make them both an enjoyable playing experience for the same type of gamers, and their differences are just a really good reason to continue playing them both!

Have you played Disney Dreamlight Valley yet? What would you add to this list? Let us know in the comments but remember; it’s not a competition! Just an exploratory discussion.