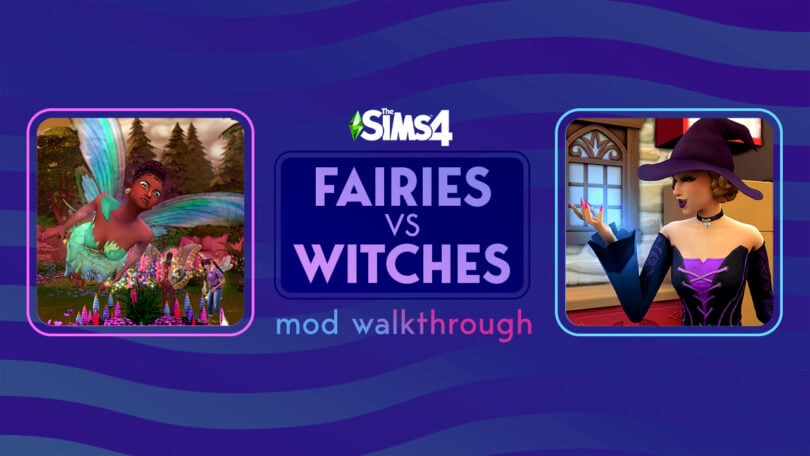 This mod is so detailed, it’s basically a free expansion pack!

The Sims 4 has a lot of occults now, but one occult it’s still lacking after all these years is fairies. A lot of Simmers might also argue that spellcasters could have more depth to them than they currently do. If you share these sentiments and are interested in new Sims 4 fantasy mods, SpinningPlumbobs‘ Fairies vs. Witches Mod is just what you’re looking for! We’re going to walk you through this huge mod with two new occult Sims, over 100 new animations, new objects, skills, and more!

When you arrive, you will see the area is now populated by fairies. Find the Ethereal Guardian, greet them, and ask them how to become a fairy. The Guardian will instruct you to look for sprites in the area. Click anywhere on the ground to look for sprites. It can take a few tries before it is successful. Once you’ve located a sprite, interact with it until it trusts you enough to allow you to make a wish.

Wish to become a fairy and the sprite will transform your Sim into a fairy! To ensure your Sim has their wings when they transform, go into CAS and select any of the items labeled WING SKINS in the earrings category. This will allow the wings to show up in Live Mode.

Fairies are extremely customizable! Click on the Fairy Form category on your fairy to toggle different options:

To become a witch, purchase the witch altar that comes with this mod in Build/Buy. Examine it and then spend some time meditating at the altar until an Ancestral Witch is summoned. Ask the Ancestral Witch about becoming a witch and they will tell you to travel to the Sylvan Glade to capture one of the sprites there.

Witches are different from spellcasters! They have been shunned by spellcasters for pursuing dark and unstable forms of magic so they exist on the fringe of spellcaster society, practicing witchcraft that spellcasters deem too unpredictable to meddle with.

Like almost all other occult Sims, fairies and witches have ranks they progress through. Rising in rank unlocks the ability to learn new powers and spells. There are five Fairy Forms and Witch Ranks and these ranks are also represented in the skill panel in The Sims 4 Fairies vs. Witches mod.

Once the experience has been used up on rank boosts or learning spells/abilities, the orb will empty again and your fairy or witch must spend more time using their magic to build up that power again. We love it when Sims 4 fantasy mods implement elements like these from packs. It’s both familiar and new and refreshing at the same time.

Both fairies and witches have their own spellbooks in The Sims 4 Fairies vs. Witches mod. Witches can conjure a spellbook by placing two amethyst crystals on either side of their altar. Fairies can obtain a spellbook from the Ethereal Guardian in the Sylvan Glade after befriending them. If you don’t wish to bother with any of that, you can also purchase them in Build/Buy.

Witch spellbooks have four tabs: Witch Rank, Powers, Witchcraft, and Altar. Witch Ranks are the ranks your witch has attained. Powers are innate abilities they possess that can be acquired from the altar. Altar is a list of altar combinations your witch has discovered.

Witchcraft and Fairy Magic are two new skills that come with The Sims 4 Fairies vs. Witches mod. Fairies learn Fairy Magic and witches learn Witchcraft. Even though they are two separate skills, the spells that can be learned are the same. Build these skills to unlock all the spells but remember; you need enough experience as well to learn new spells. Out of all The Sims 4 fantasy mods we’ve seen, this mod has some of the most interesting and varied spell varieties.

Unlike spells, magical abilities and powers are more like innate abilities that your fairy or witch possesses in The Sims 4 Fairies vs. Witches mod. They are the lifestyle your fairy or witch lives rather than a spell that can be cast. Gain new Magical Abilities/Powers at the fairy statue for fairies or the altar for witches.

Power sources are what make each individual fairy and witch truly unique. Think of power sources as their specialty or the type of witch or fairy they are. Both witches and fairies can draw on the energy of the world around them to tap into their magic. A witch or fairy with a power source is going to learn Fairy Magic or Witchcraft more efficiently and will get some perks related to their power source.

When you’ve decided on what you want to draw your magic from, click on that item to begin drawing energy from it. As you do this, your experience orb will slowly fill. When the orb is full, you’ll have harnessed the power of that source! This power source is now your witch or fairy’s “element” or specialty.

Here are all the power sources we discovered in our playthrough of The Sims 4 Fairies vs. Witches mod but there may be even more so make sure to explore and click on lots of different things to see if you can turn it into a power source! We are so here for Sims 4 fantasy mods that have exploration elements to them like this!

Children of fairies and witches don’t have full control over their powers yet. In fact, they need their witch or fairy parent to awaken the dormant powers that lie within them. Click on your child to awaken the powers they were born with!

Once awakened, fairy and witch children will both be able to practice magic and learn magic from their parents. Children of fairies can also be taught to fly by their parents and have wings applied to them in CAS.

Witch and fairy children won’t build magical skills or learn spells/abilities but the more they practice magic and flying as children, the better they’ll start out in those skills when they become teens so it’s still worth the effort of practicing young.

We always love Sims 4 fantasy mods that include our little Sims!

There are seven new objects purchasable in Build/Buy that come with The Sims 4 Fairies vs. Witches mod.

Here are all the new CAS items that come with the Fairies vs. Witches Mod. Please note that some of the fairy wings are different swatches of the same item; we wanted to show off all the different wing shapes available.

It’s no surprise that we highly recommend this mod. We have never been disappointed by any of SpinningPlumbobs’ creations. This modder makes some of the best Sims 4 fantasy mods we’ve ever seen. You can download the mod right now for free from SpinningPlumbobs’ Patreon!

Love Sims 4 fantasy mods? Check out our walkthrough on the Werewolves mod by the same creator!