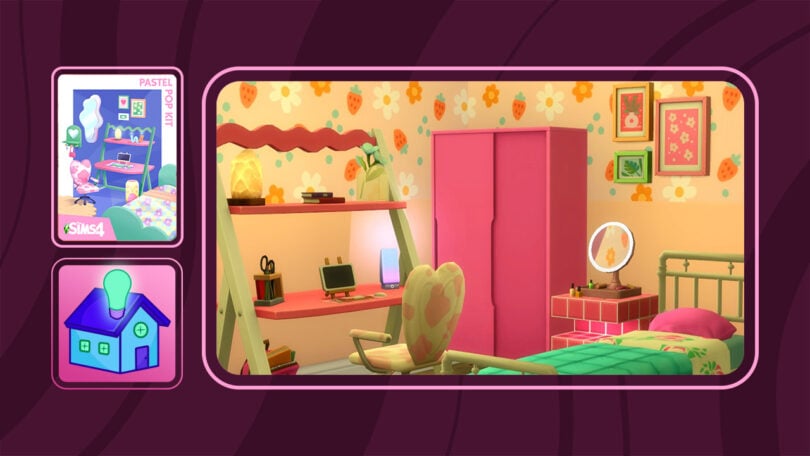 Give your rooms a pop of colour!

The recent release of The Sims 4 Pastel Pop Kit took many by surprise. Not only did The Sims Team work collaborate with Plumbella, but it was also one that has pleasantly surprised many players and builders within the community. Not only adds a variety of new pastel-coloured objects to the game, but it also strays away from the “50 shades of beige” feel too!

Of course, we could not wait to jump in and explore the new Kit in more detail! Instead of focusing on doing our normal Let’s Build style articles, we decided to change it up and take a new approach. What we wanted to focus on this time was remodelling and refurnishing some Base Game built rooms and incorporating those pops of pastel colours from the new Kit into those rooms.

While The Sims 4 Pastel Pop Kit gives us one pre-made room, we took three of the Pre-made Base Game rooms and added a new twist to them!

Kicking things off with the Snooze Cruise Control room. It’s a very small room, but with plenty of potential to add that pastel pop!

The room originally comes in at $1,674 and features just a bed and chest of draws. While the space of the room was small, it did present a challenge. How could we ensure that all the objects being used would fit?

After some trial and error, we eventually found a layout that worked. Of course, with everything working and with no issues for the play test Sim it all came together perfectly.

Take a look at the end result below!

While the room didn’t provide much space, it definitely has everything your Sim needs. This room would probably be more of a room you would find if they were studying away at either Foxbury Institute or Britechester. Either way, this pretty pastel pink and hot pink combination worked well together.

For the second room, we took the Simple Minded Office and gave it a much-needed pastel makeover. Coming in at $4,352

With more space to work with, it was time to get started. This time around, the aim was to stick with a more neutral pastel theme with pops of colour rather than everything being bright and vibrant.

While the neutral theme somewhat stayed throughout the build, a clear blue theme started to develop instead. It gave more of a calming and relaxing feel, especially with the little corner to get comfortable and read a good book! Definitely the kind of office space we’d consider having in our own homes.

The last Base Game room that received a makeover was the Royal Renaissance Lounge. Coming in at $15,425, it definitely was not fit for purpose with the theme we had in mind.

Now, when we say a Pastel Pop themed Movie Hangout, we mean it in a bit of a roundabout way. While utilizing the new objects, we chose to go for more of the neutral swatches on the objects as well as incorporating the cow print swatches on a couple of the objects too.

It really helped bring the room together and against the red and wooden walls it made it pop, just differently. This would be the kind of movie room/lounge we could see being in the Goth’s home, where you would find the younger generation of the family hanging out at the end of the day!

The Sims 4 Pastel Pop Kit has a variety of objects that are perfect in a number of different themed rooms. With plenty of swatches that work well with Base Game objects, the possibilities when using them alongside objects from additional packs are endless!

All the rooms featured in this post use objects from The Sims 4 Base Game and Pastel Pop Kit. You can find all of these room builds on The Gallery by searching for Leekseverywhere!