Still deciding if the second Sims 4 game pack is right for you? Read all about it below and see if you’ll be booking a trip to the spa anytime soon.

Fashion wasn’t the focus of this pack, but there are some stylish additions to your sim’s wardrobes. The new clothing ranges from athletic gear, comfy loungewear, and spa towels. Each gender features new hairstyles as well, both long and short. Here are some examples of what you’ll find in the pack. 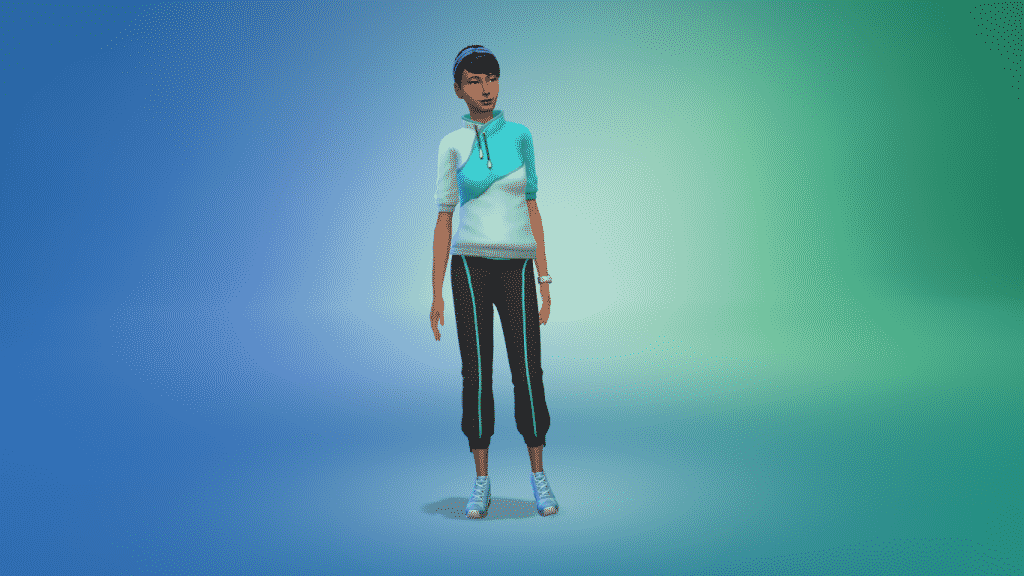 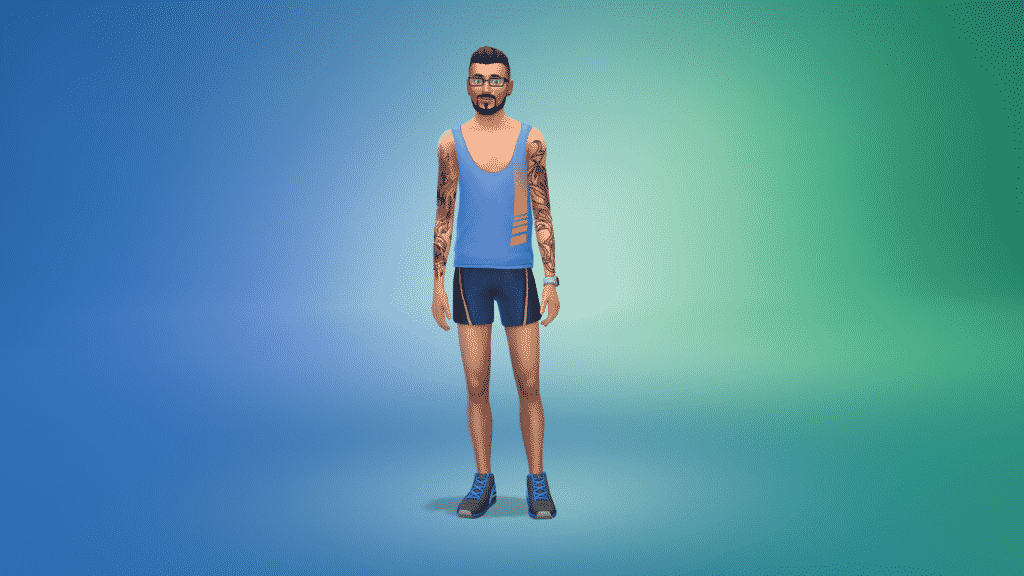 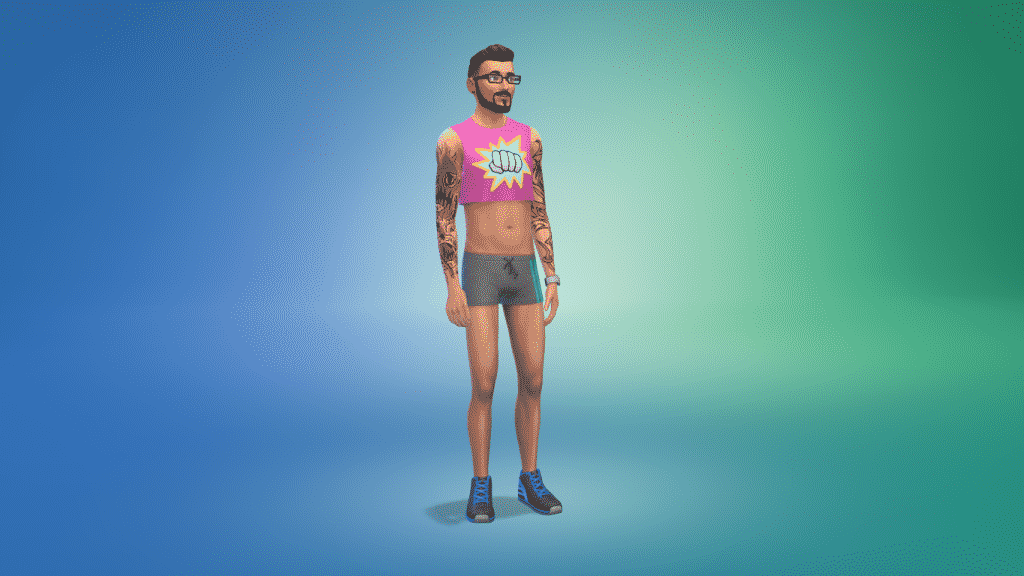 I don’t know about you, but I’m loving the outfit styles we’ve been getting in Sims 4. Dressing my sims is always a struggle because everything looks amazing. Much better than the outdated clothing we received in previous iterations. While the amount is crazy, what we received is gorgeous and I’m a big fan. Quality over quantity as they say.

And do you see that men’s crop top? Classic.

I don’t even know where to start because there’s so much newness here and it’s all fantastic additions to the catalogue. These items are beautiful and have such amazing synergy that it’s going to be hard for me going forward to use anything other than the Spa Day items whenever I decorate houses.

While everything is downright gorgeous, I’m going to focus on the new types of items rather than the stylized forms of past items. Spa Day includes:

Fish Tanks – You can stock them with fish your sims have caught, or you can buy the fish. Unlike past sims games, these tanks don’t require feeding or cleaning, which is kind of a bummer, especially the feeding part, but my fish always died from negligence anyway. Now I don’t have to worry about that.

Fountain Walls – One of my favorite items in the game. Who doesn’t want a giant wall of water in their home? The sound effect is spot on and makes me crave rain in the game even more because now I know it’ll sound wonderful.

Incense Holders – There are two variations of the holder each featuring a collection of different scents that affect your sim’s moods depending which you light. Be careful as these are known to cause fires at times. 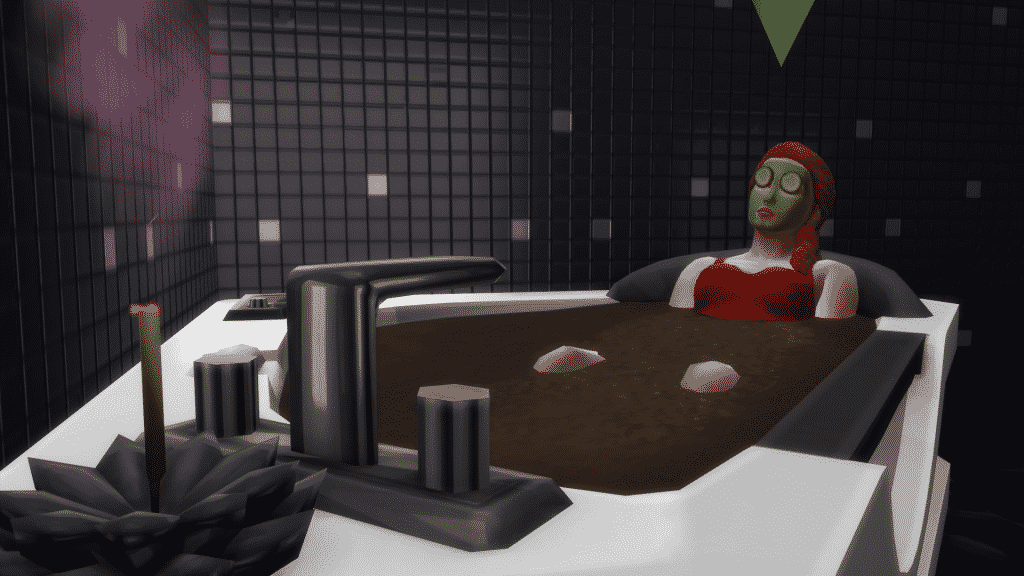 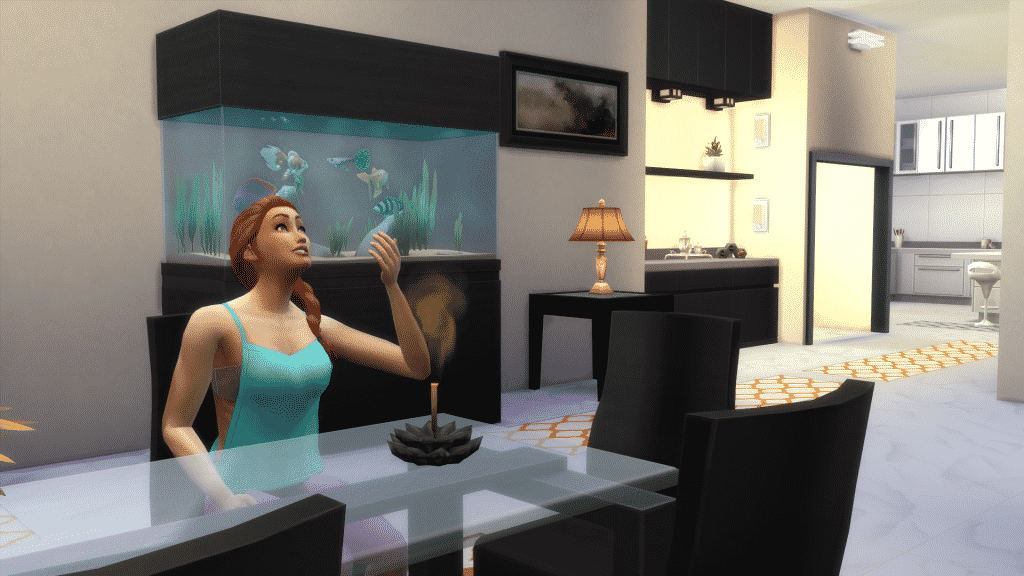 All of these items are going to be staples in all of my future houses, along with pretty much everything else in this pack, as I said before.

Now for the real meat of this pack and the reason it’s titled Spa Day. The spa activities. All the new gameplay aspects build your sim’s Wellness Skill. As this increases, your sims learn new massages to give, new yoga poses, and new recipes. Sims who often meditate will also eventually be able to levitate and teleport. Here’s a rundown of the new gameplay in the pack:

Massage Table and Chair – On these your sims can receive all kinds of hand, feet, and back massages. As they increase their wellness skill, they can learn the different massages to perform on other sims. The best part about these is that unlike in Sims 3, these feature NPCs to perform the massages. 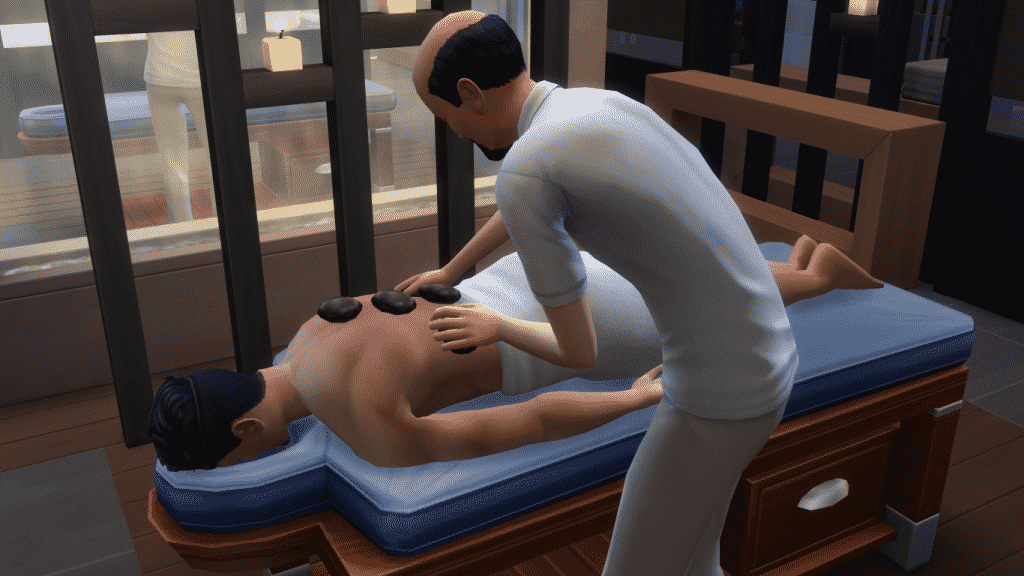 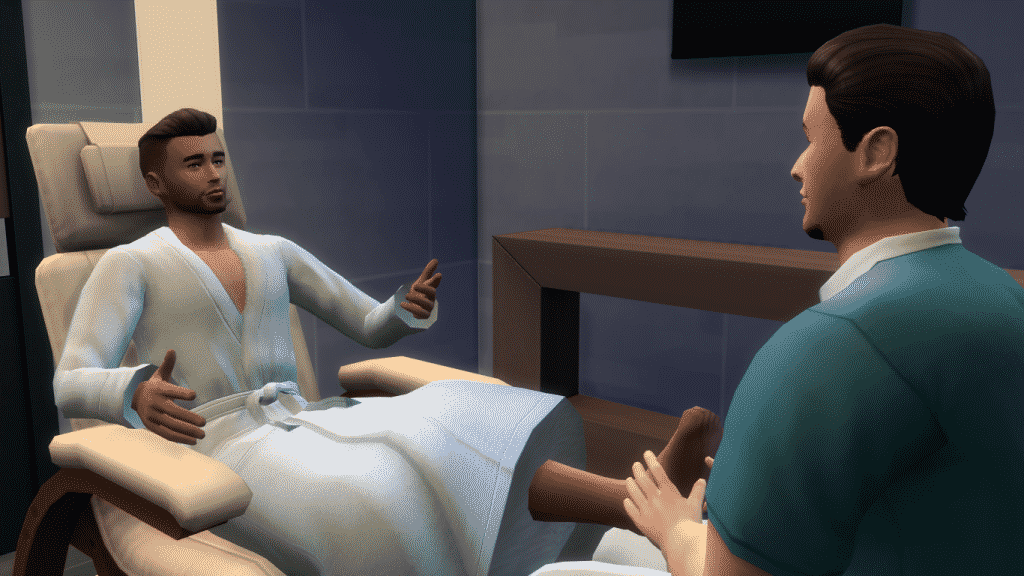 Saunas and Baths– Everyone loves a good steam every now and then. You can take a loved one in with you to make things extra steamy. Just don’t stay in too long as it could have an adverse effect on their life… they won’t have one. 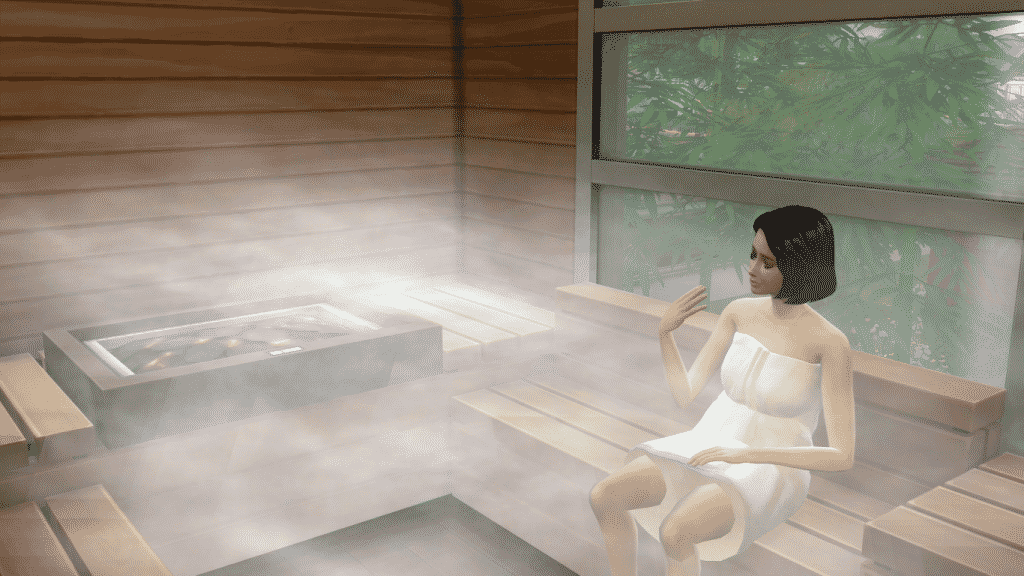 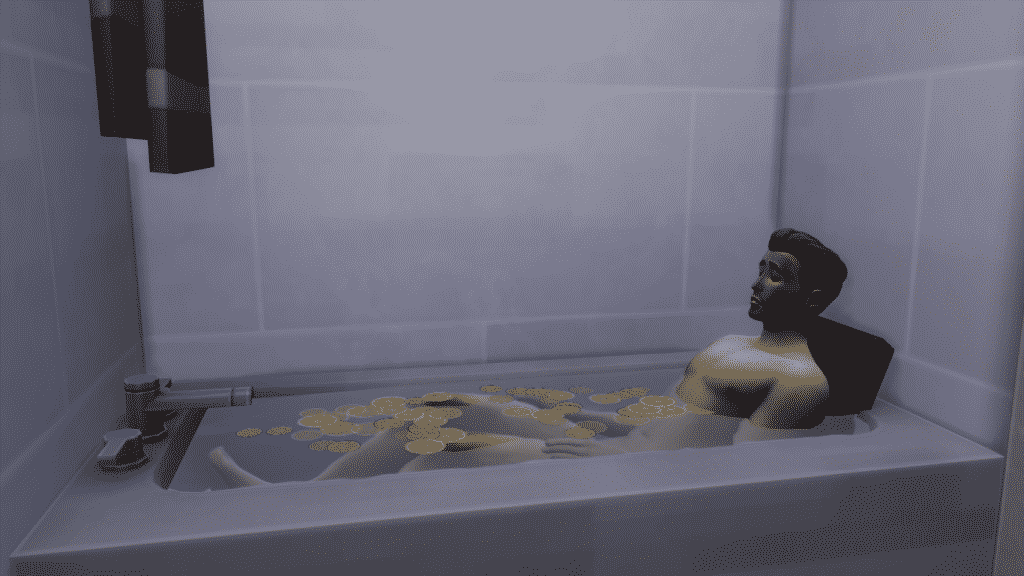 Meditation Stool – Pull up a stool, close your eyes, and breathe. Meditating slows your sim’s need decay, clears their mind emotionally, and features some cool tricks once sims spend enough time with it. Eventually sims will learn to levitate while meditating, which doesn’t have any significant effects, but onlookers will be amazed at your abilities.

Eventually they’ll also be able to teleport either to a location in their current neighborhood, or to secret locations they’ve previously visited. This will save you a trip to the park just to visit the Forgotten Grotto as you can just teleport straight there. 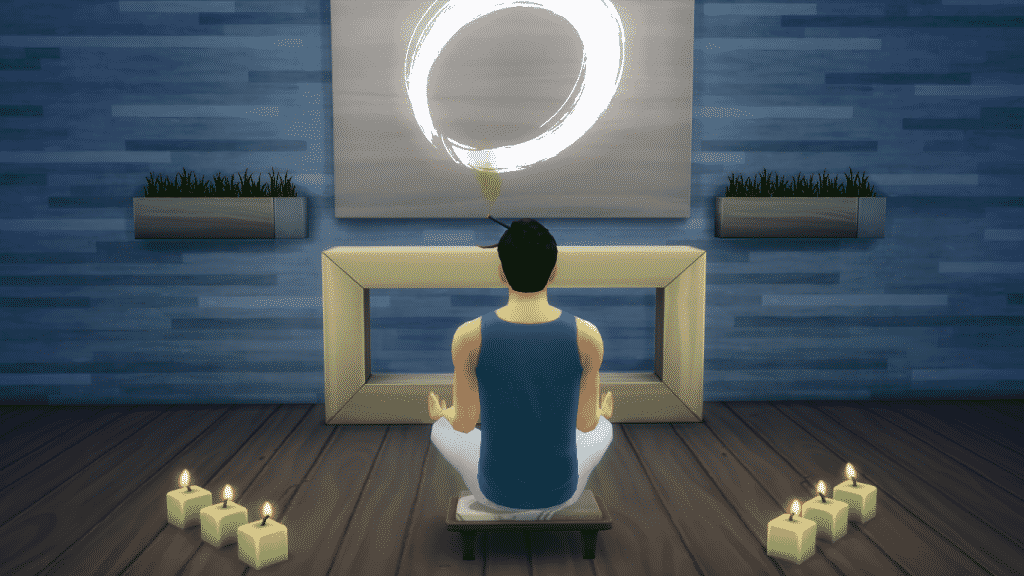 Yoga Mat – I’ve been awaiting its return from Sims 2 and let me tell you, it was worth the wait. The animations are astounding. Take a look at the picture below. I took this during a yoga class at the spa, which is totally awesome all on its own, but look again. You can clearly tell which sims are new, which are seasoned, and which are pros. The young guy in the sweatshirt and the woman in front of him have their knees bent, the woman in pink is featuring perfect form for downward facing dog, and the instructor is able to outstretch his leg. 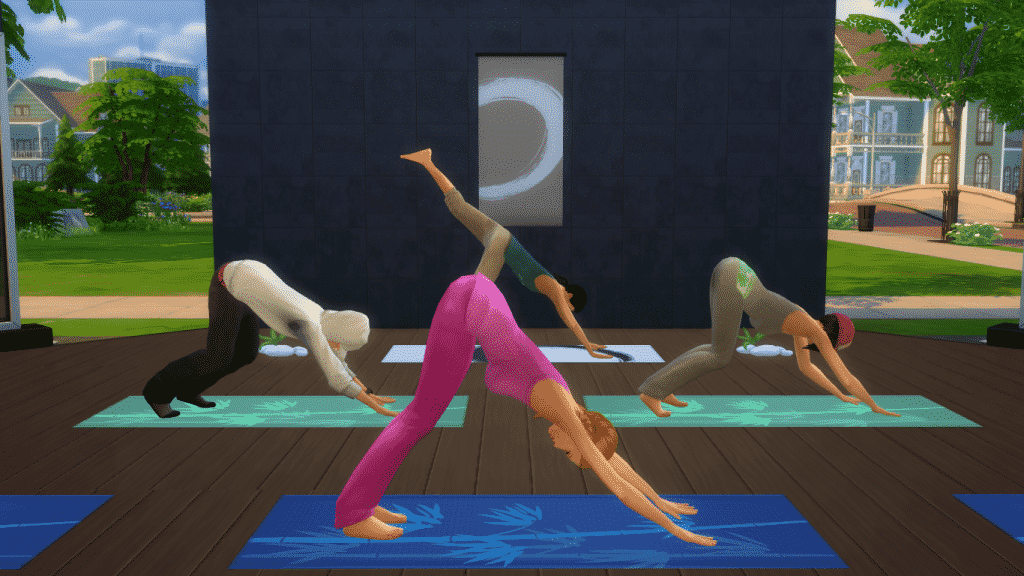 Not only does the practice feature a wide selection of poses, but sims will perform them differently depending where they are in the wellness skill, which is an amazing attention to detail. Sims can register for yoga classes, perform specific poses, practice, or perform specific routines that give different moodlets. They’ve really done their homework for this and I’m impressed.

Another great thing about both the yoga mat and the meditation stool is that they can be put in a sim’s inventory, so your sim can do yoga or meditate anywhere.

Initially I thought this game pack was a letdown after everything we received in the Outdoor Retreat pack, but I’ve definitely reconsidered that claim since playing it. While Outdoor Retreat has Granite Falls going for it, Spa Day still holds its own even without a new world. The designs of everything from the clothes to the furniture are perfect. The animations are more than I could have imagined right down to the arms quaking during tough yoga poses. Another plus is the pre-built lots they’ve included for you to place in your towns that feature some of the strongest designs and stylings I’ve seen from Maxis lots so far.

The biggest let down of the pack is that there aren’t any new traits or aspirations. This would have been the perfect time to include new traits based around wellness such as the return of the vegetarian trait from Sims 3. Another athletic aspiration would have fit perfectly as well since we still only have one in that category. The goals for it could have been things such as “attend 3 yoga classes” or “meditate in a park for 5 hours.” It’s a shame nothing like these were included.

Spa Day isn’t just for your sims. Watch them for a while and you’ll feel just as relaxed as if you were at the spa yourself. Which reminds me, check out the newest radio station “New Age” because it’s emotionally moving.

The missing point is solely for the lack of any new traits or aspirations, which was pretty disappointing, especially when Outdoor Retreat featured them.