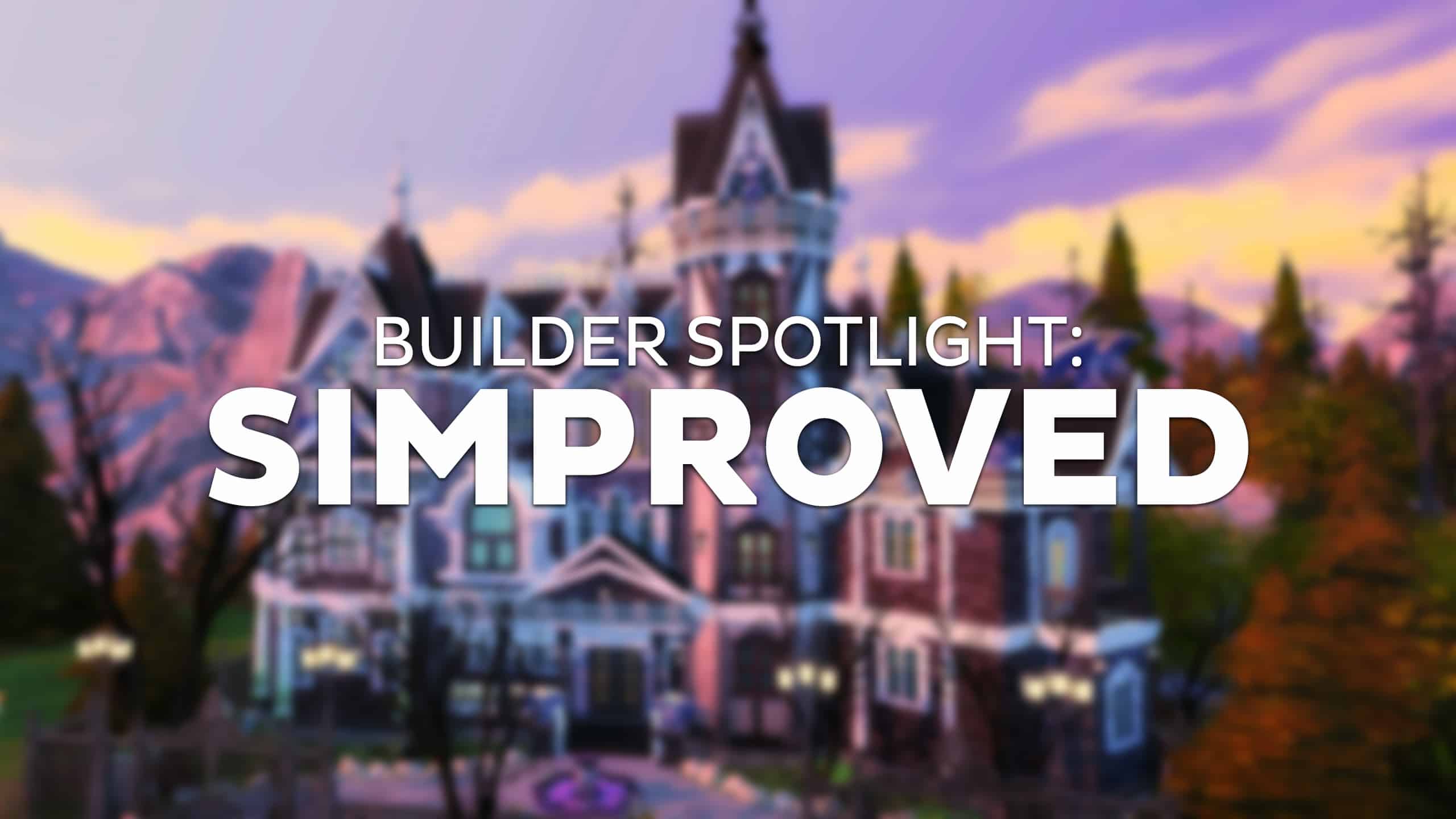 We continue our Gallery Themed Week with a brand new builder spotlight!

For this article we interviewed a popular german simmer Fry, known for her Gallery and YouTube name “Simproved“. She created the popular Island Challenge for The Sims 4 and has over 33K subscribers on YouTube to date and continues to deliver new builds on her channel on a regular basis.

I’ve been playing The Sims since the very first game came out. I immediately fell in love with the build mode and spent more time there than in live mode or CAS. I usually built a house, did the interior design, moved in some Sims I quickly made and then my project was considered “done”. Then I moved on to the next house and the whole process repeated itself. Until the neighborhood was full. Things went pretty quickly in The Sims 1 because the world was so small. So I started building in themes. One neighborhood in a medieval style, the next circle it was futuristic and the next tropical etc. I just enjoyed exploring new styles and visual design in the game. Creating whole cities that told a story. With every pack came more objects and more possibilities for future builds. I still try out new styles and themes up to this day. It always relaxes me to work on a new build project after a long stressful day and now in The Sims 4 it is even easier to share your creations with others through the gallery! Which I love. That’s also why I started my youtube channel in the first place. A better showcase of my builds, if simmers weren’t sure if they want to download it.

Sometimes it’s a house or building I see in real life and think I could rebuild it in The Sims! Or a photo I see online or in my various architecture books ( I have quite a collection now). My newest obsession is set or production design in movies, theatre, TV shows or even games. I guess the work process a set designer has is similar to Sims builder. I learned a great deal from panels, interviews and of course books about architecture and set design. Also my viewers have awesome ideas which I write down in a little note book! So I have a long list of things I want to build. Before I start I simply pick one that I find interesting that day. I sketch the house before hand and so I usually already know how a build looks like in the end. Some smaller corners or parts may not turn out like I envisioned it. But the general feel is most definitely there! And I think that counts the most. Especially for storytelling and playing in The Sims.

It depends on the size of the lot and the grade of detail. I like to build very detailed with lots of clutter and decorations, which takes quite some time. A small micro home or room build could “only” take 2 hours in The Sims 4. My current “time highscore” on a Sims 4 build is 16 hours I believe – that’s still quite short. The longest Build took me about 50 hours back in Sims 3 days. Not to mention the time I spent in the world editor, which I hope makes a comeback in The Sims 4.

Which builds are you most proud of?

The builds I am most proud of are always the very big ones with a high level of detail which took a lot of time. The longer a build takes, the prouder I am. I guess because I kind of “powered” through it and looking at the finished build is even more satisfying then. It’s like “Hey look at it, I made that! I placed every single flower or stone myself! And now it is done!”. That’s always a proud moment. Since I also like to build very versatile. I like the more “odd” builds the most. My Arkham Asylum, alien sorority house, eco complex, aquarium, kids clubhouse, haunted graveyard, vampire cathedral or the new circus come to mind. I am also a big horror fan, so all my dark creepy builds have a big place in my heart.

Your Island Challenge has gotten really popular in the community. What inspired you to create it?

I asked myself how I would like to play the game myself. I remembered the Sims medieval and Life stories games which had a more quest based system. I also like board games, so I mixed these two things together. You have to roll two dices for a random outcome which the player can’t influence themselves. The main Quest? Survive on the island with your sims, craft objects that make living easier and try to create families and friendships along the way. I invented a little background story about two gods (each dice) in a constant battle over the fate of your sims. Or…maybe I just needed an excuse to build a big tropical island. Haha.

LEARN MORE ABOUT THE CHALLENGE!

I really like the Vampire Game Pack. The new windows, doors, freezes, and roof decorations are very detailed and have this very nice old ancient style. Which you can use for any old architectural style from roman ruins to the modern victorian era. The best are the many cracks and holes wall decorations, which are great if you want to build something run down or shabby. They also cost no simoleons!

If you want to go for a big Expansion Pack, I still like Get Together the most. Lots of new modern and sleek build elements came with this pack and not to forget the european medieval theme. My favourite world of The Sims 4 is also Windenburg! Reminds me of a lot of cities here in Germany.

First of course I highly recommend to play The Island Challenge on my tropical island build!

Since I can’t really give a top 5, since it would break my hard to judge my builds. They are all my babies. So I take my current most popular youtube video builds, then I feel like my viewers kind of chose them 😉

I also want to say thank you to Sims Community for this interview. I have to admit that I feel honored. Also thank you for the awesome website with lots of helpful articles, guides and spotlights about The Sims franchise. I always like to know more about the game I love so much. A game that brings so many people from all around the world together.