Before you read any further, you should be aware that this article contains major spoilers about the StrangerVille Mystery story. If you do not want to have the story spoiled for you, do not continue reading this article.

The Sims 4 StrangerVille is the first add-on pack in the The Sims PC franchise to introduce a story mode. In the StrangerVille Mystery story, your Sim discovers that the residents of StrangerVille are being affected by a disturbing illness and must follow the clues to uncover the source of the disease and destroy it. The story is optional; if you choose not to pursue the story when you arrive in StrangerVille, the plot will have very little influence on your Sim there. The town will simply remain a little strange, but if you want to rid StrangerVille of all its weirdness and restore everything to normal, you’ll have to play through the story.

I’m going to walk you through how to do just that! 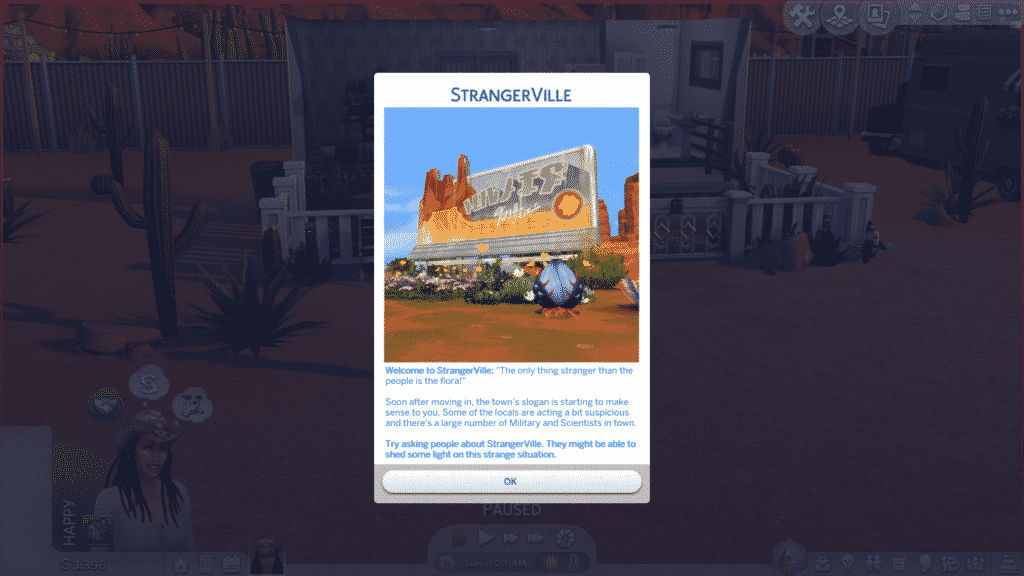 Welcome to StrangerVille: “The only thing stranger than the people is the flora!”

Soon after moving in, the town’s slogan is starting to make sense to you. Some of the locals are acting a bit suspicious, and there’s a large number of Military and Scientists in town.

Try asking people about StrangerVille. They might be able to shed some light on this strange situation.

When you first arrive in StrangerVille, things don’t seem quite right. Something weird is going on in this town. Start by asking Sims around town about StrangerVille. Be sure to ask all kinds of Sims; the Curio Shop Owner, Conspiracy Theorists, Scientists, Military Personnel, Possessed Sims, and Civilians. Each of them will have unique information to share with you. After asking some folks around town, one thing becomes apparent; everything seems to point to the Secret Lab located in a crater outside of town. Head to the Secret Lab to investigate further. 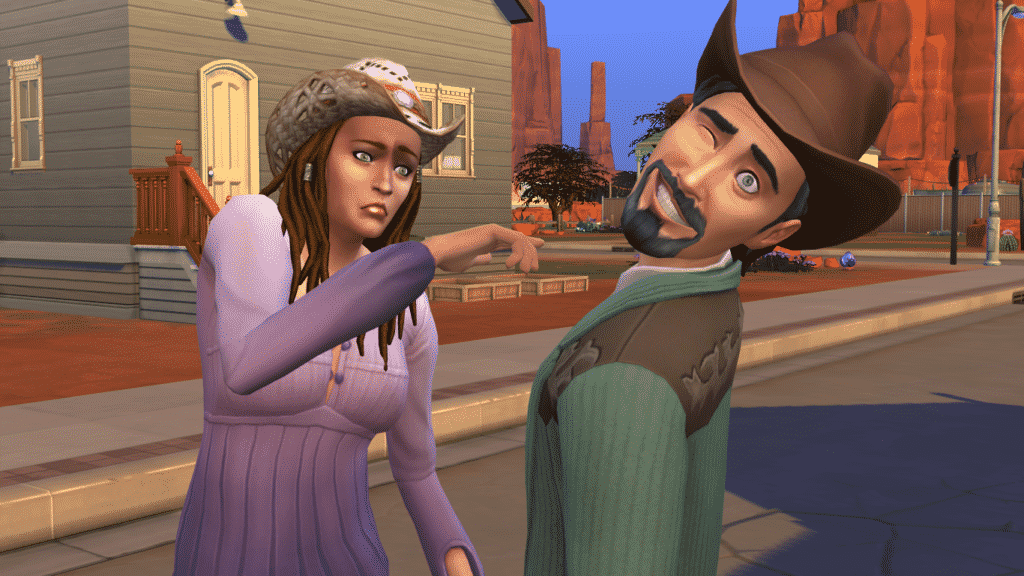 The Secret Lab looks abandoned. The whole lab is sectioned off with barbed wire and there are papers scattered all over the main floor, as if whoever was there fled in a hurry. There’s a big metal door leading down to the basement. Examining the door will reveal that it’s locked and can only be accessed with a keycard. Before leaving the lab, stick around to collect evidence. Go through the entire main floor, rummaging through piles of papers on desks and abandoned file boxes lying on the floor. Don’t forget to take a picture of the door for evidence, too. In total, you should have 9 pieces of evidence in your inventory by the time you’re finished ransacking the lab. 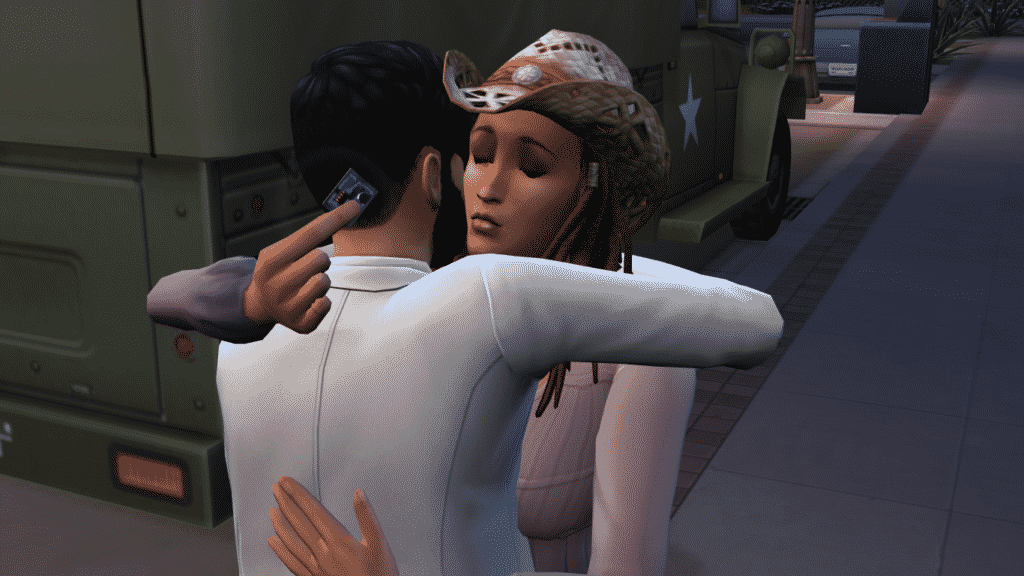 After obtaining the keycard, head back to the Secret Lab and open the door. The keycard will grant you access to the first level of the basement. There’s another door leading down to the next level of the basement, but it’s at the end of a hallway full of purple spores. Trying to pass through the spores will cause your Sim to collapse and wake up possessed for a period of time. You’ll need a hazmat suit to protect you from the spores if you want to make it to the end of the hallway unharmed and open the next door. 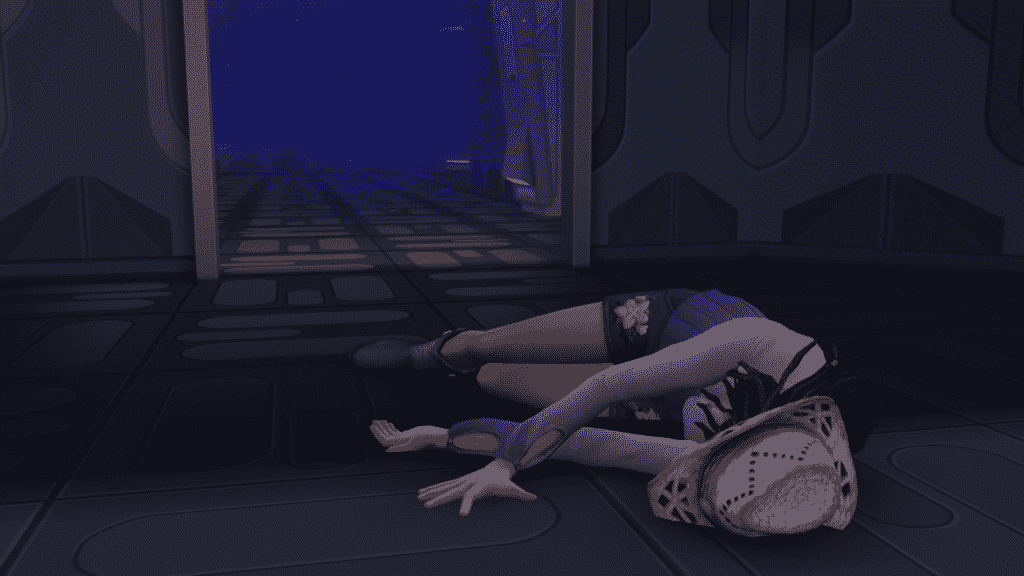 There is another room on this level of the basement with some chemical analyzers that are glowing red, which means you should probably hover over them. They’re important. Hovering over the analyzers informs you that you need to collect spore clusters to use the analyzers. You’ll need an Infection Scanner if you want to find spore clusters, which can be obtained from Military Personnel.

There’s nothing more for you to do here right now, so leave the Secret Lab and head back to StrangerVille.