PLEASE NOTE: This post is pure speculation and doesn’t contain any official confirmation (yet) about the theme of The Sims 4’s upcoming pack.

UPDATE: There’s been another leak for The Sims 4 Tropical Paradise. This time the listing was posted on a Dutch website Gamesync.nl!

The listing includes the following information (translated to English via Google Translate):

In the Sims 4 Tropical Paradise / Tropical Paradise your sims 4 will have the opportunity to enjoy in a tropical island as the name suggests.
Exact innovations and possibilities are expected closer to the release and after the official announcement by EA.

Instant-Gaming.com, a gaming retail website that sells game codes has published a rather interesting listing on their website regarding the upcoming pack for The Sims 4.

We’ve also speculated that The Sims 4’s 7th Expansion Pack could be coming out this June taking in consideration numerous evidence from voice actors and the announcement that there’s going to be a big system update for The Sims 4 this June.

This *could* be a valid retail leak considering that Instant-Gaming has previously listed bundles for The Sims 4 way before they were announced with some of the listings even mentioning the correct release date.

The listing for The Sims 4 Tropical Paradise Expansion Pack doesn’t contain much evidence just yet. The only thing they’ve shown is that the release is set for 2019 as well as an edited box art that contains the name and the pack type.

UPDATE: The description mentioned down below was taken from an idea thread over on The Sims Forums. Instant-Gaming has a tendency to fill their listings with unofficial information so we can for sure confirm that the description down below doesn’t mean anything. 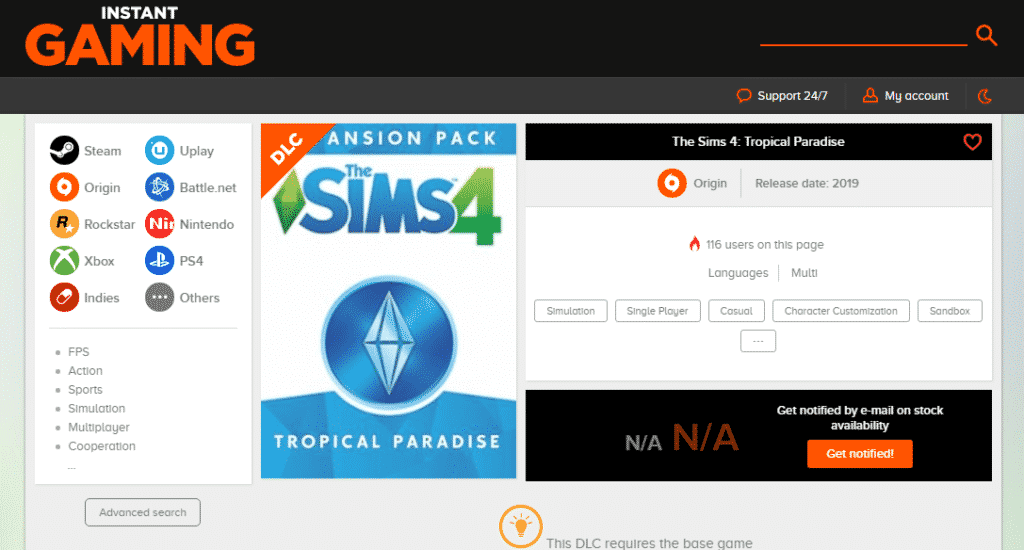 We’ll make sure to keep you posted on more information on this listing and the next Expansion Pack as it gets available.