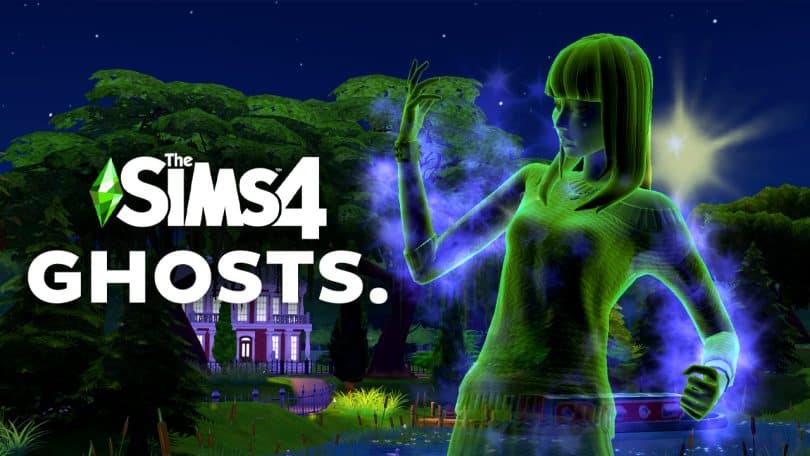 Every death can be a power ability in The Sims!

Did you know there is an occult life state in the base game? Two, actually. Ghosts and PlantSims, but we’ll be talking about ghosts today. Ghosts have been a part of the Sims franchise since the first installment of the series way back in 2000 but they’ve gone through a lot of developments since then.

Sadly, ghosts seem to be a step backward from their Sims 3 predecessors but that doesn’t mean ghosts in The Sims 4 don’t have some gameplay of their own.

Here’s everything you need to know about playing as a ghost in The Sims 4!

Of course, the most obvious way to become a ghost is to kill a Sim through any in-game means but this requires some effort, at least if you want to be able to play as a ghost. First, you’ll have to make sure there are at least two teen or older Sims in the household before you kill off one of your Sims. If you kill the only Sim in a single Sim household, you’ll get a game over and have to go back to the world select screen to play as another family. If you kill a Sim with only children or younger Sims left in the house, social services will remove them and you’ll still get a game over screen. You could have your new family purchase the lot with the tombstone on it but it’s easier to not have to do all that in the first place.

When a Sim dies, they become a ghost but they leave your household and turn into an NPC ghost that periodically visits whatever lot their tombstone is on. In order to make the ghost playable, you’ll need to wait for the ghost to spawn. Keep an eye on their tombstone at around midnight each night. They won’t appear every night but they will usually show up once every couple of nights.

Once the ghost is on the lot, your Sim will have to befriend them. Asking a ghost to move in requires a maxed out friendship bar. The option to ask them to join the household won’t appear under the Friendly socials until you have a full friendship bar. If you’re impatient and don’t want to bother building up a relationship with a ghost, you can always use the cheat testingcheats true and then Shift+Click the tombstone to immediately add the ghost to your household.

Or, if you really just want to jump in the game and play with a ghost immediately, you can always grab a ghost off the Gallery.

Ghosts change colour according to what their current emotional state is. You can always tell how a ghost is feeling just by looking at them. Their colour will correspond with the different emotion colours:

Wondering how to get all these deaths? Check out our ultimate guide!

Understandably, ghosts never age in The Sims 4 and cannot die again while they are still a ghost. In fact, they are frozen at the point of their death in every respect… meaning they cannot reproduce. That’s right, Simmers. Unfortunately, no cute ghost babies like The Sims 3. We’re disappointed about it, too. The only way to have a ghost have a baby is to turn a pregnant Sim into a ghost (via cheats since pregnant Sims cannot die) but your ghost Sim will still give birth to a very much alive, non-ghost baby.

Even though they don’t age, ghosts do have a lifespan of sorts. They only have so much time on earth before their spirit fades away to the netherworld. This is usually around 100 Sim days or so, typically a full generation when playing on a normal lifespan. You’ll receive a notification when a ghost is going to return to the netherworld soon.

If a ghost is visiting you at night to cause trouble and you’re tired of it, you can click on their tombstone to release their spirit to the netherworld. This will delete the ghost from existence and your Sims will never be bothered by them again. On the flip side, if you’ve grown attached to your nightly ghost visitor and don’t want their spirit to fade over time, you can click their tombstone and strengthen their connection to the physical world.

Playing as a Ghost

The Sims 4 kind of treats ghosts the same as regular Sims, which is a bit… unfortunate. This means that your playable ghosts still need to take care of their motives and they will keep inviting their living friends and relatives out for coffee and stuff as if they never died. Yeah. It’s weird.

But ghosts do have some unique interactions and abilities that living Sims do not.

Ghosts can also hover and float around instead of walking. They can pass through walls and objects but the player can’t really control what path a ghost will choose to take to get somewhere. They will sometimes still choose to use doors if it’s not more convenient to pass through a wall.

If you want your ghost Sim to return to the world of the living, there are several ways you can accomplish this; however, resurrection has been glitched for some time now. Many players report that the resurrection action cancels itself on the ghost when attempting to revive them, but it does work some of the time. Currently, we’re not quite sure what causes it to work for some players and not others. We have done it multiple times in our own game and experienced both failure and success seemingly at random.

Ambrosia is a level 10 Gourmet Cooking recipe but your Sims must also be level 10 in Cooking in order to unlock it. It requires a death flower, angelfish, and a Potion of Youth to make. Angelfish can be caught in Willow Creek and Potions of Youth can be purchased from the Rewards Store for 1,500 satisfaction points. See our guide on how to obtain a death flower.

If a ghost eats a plate of ambrosia, they will be brought back to life.

The Book of Life

Sims who have completed the Bestselling Author aspiration will gain the Poetic trait, which allows them to write the Book of Life. Once the Book of Life has been written, it can be bound to a living Sim. When the Sim dies, they will be able to come back to life by reading the Book of Life.

The Book of Life will only resurrect the Sim it was bound to. Since it cannot be bound to a ghost Sim, the Book of Life won’t be of any use to a Sim who is already dead. This is very much a preventative measure that requires forethought in case something ever happens to a living Sim.

The wishing well comes with the Romantic Garden Stuff pack and can be used to resurrect a dead Sim. Ghost Sims can wish for life at the well for $1 but a resurrection is not always guaranteed. There is a range of different outcomes. Positive outcomes include being gifted a plate of ambrosia or just magically resurrecting the Sim on the spot. Negative outcomes include flat-out ignoring the wish or even sending your ghost Sim back to the netherworld, never to be seen again!

To increase your chances of a good outcome, give the maximum offering of $5,000 to the well before making your wish and don’t attempt to wish if the face above the well is mischievous, angry, or shrouded under a hood.

You can cheat the well outcomes by using the testingcheats true cheat and Shift+Clicking the well to force positive or overwhelmingly positive outcomes.