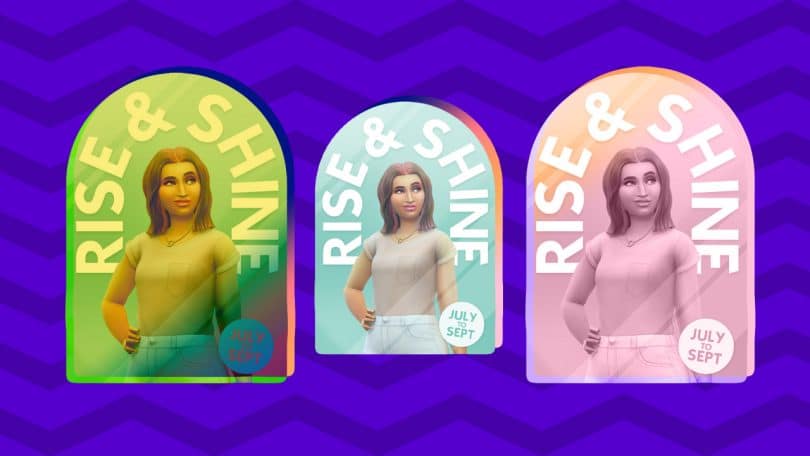 What’s in this Roadmap? Let’s take a deep dive into the teaser

The “Stay Up” Roadmap for The Sims 4 lasted for the good 2 months for the game. In fact, we just had a release of The Sims 4 Werewolves Game Pack last week!

The main Sims Community Team is still on Paid Time Off until July and they’re probably off somewhere taking a rest from the weirdest, most rampant marketing technique known to man kind. Seriously though, they probably haven’t even gotten a chance to play with Werewolves completely yet and we’re already talking about the upcoming Expansion Pack. As if The Sims doesn’t only want to burn out Content Creators, but players of their own game as well…

Nonetheless, it’s still going to be a packed summer from the looks of the teaser (and the leaked information that we have). Let’s take a deep dive of what’s ahead of us!

Rise & Shine (and spend your dime!)

The Rise & Shine Roadmap will begin this July and will last until September 2022. Across the image teaser there are multiple posters scattered around that hint at multiple things that will be coming in the season ahead. It also includes confirmations regarding Kits, and the upcoming Expansion Pack. Let’s overanalyze this image and speculate on the things we know (and things we could throw wild guesses at):

A couple of weeks ago EA accidentally revealed in their survey that “High School” is one of the Expansion Packs for The Sims 4, before the Rise & Shine Teaser was even posted. The survey later got quickly updated with “High School” being removed. Today, with the official Roadmap, there’s now another layer of confirmation to EA’s own leak: High School is definitely happening.

There are posters on the corner below that heavily hint at High School. On the left there’s an “S” scribble that I’m pretty sure we all used to doodle when we were bored at school. On the right there’s a graduation cap with crayons on the bottom, sort of giving a hint that it’s not University, but a school institution that comes before it.

Either way, it looks like a fun time ahead with the High School Pack. At least we hope so.

I have only one thing to say – Kits aren’t that bad if they’re done right. The last packed release of Moonlight Chic and Little Campers was one of the better Kits that The Sims Team has done, and I hope The Sims Team continues with attention to details in these releases. Especially if Stuff Packs are now a thing of the past…

In the teaser there have been two Kits announced, one being marked as “Style Kit” and one as “Build Kit”. Yeah, so a CAS and Build Kit are next on the Roadmap.

In the image teaser above we have a lot of Poster illustrations of Cacti, as well as other plants that seem to be revolving around the Outdoors. For the Style Kit it seems we are getting a Shirt and a Hat. That’s about it for the CAS Kit when it comes to the teaser unfortunately…

The Base Game Update

In the teaser there’s an image of a Sun along with the Base Game Update. That’s all we have on that…

What do you think about the Season ahead? Are you Excited? Confused? Didn’t have time to catch up on the previous Content and are wondering what is going on? Or all of the above? Let us know in a very simple Community Poll below: