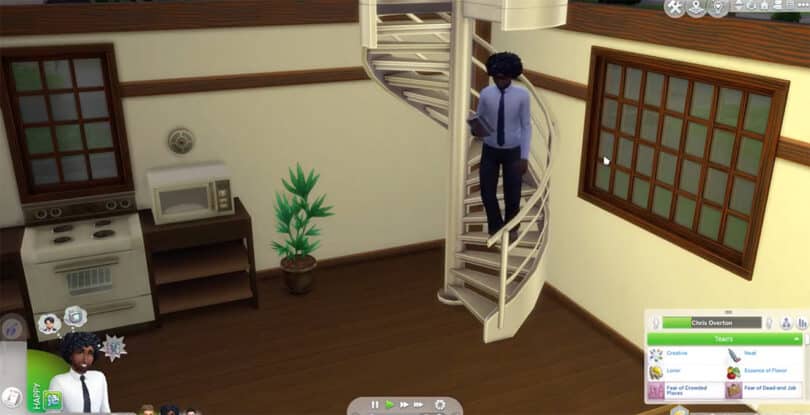 On top of great functionality, the modders ensured that animations are smooth!

This Sunday there was an ominous teaser about a talented project between two talented modders – thepancake1 and MizoreYukii.

Today, the modders have done a full reveal and let me just say that they have exceeded my expectations!

What thought was difficult to develop has now been brought by this talented modding team.

Thepancake1 and MizoreYukii have crafted the Spiral Staircase Mod for the game with special care and attention towards details (and technical challenges).

The Spiral Stairs Mod functions just like you would expect: you place down the stairs and you go up and down.

You’ll be able to give your rooms extra space with a modern, rounded twist.

The functionality of the Mod has been best described by modders in their FAQ Post:

Surprise! Announcing Project Spiral, a base game compatible functional spiral staircase mod with animations that doesn’t use elevators or other teleportation systems to work. It is currently in alpha testing since some features are still being investigated and worked on, and because it is a new system that needs extra testers to identify bugs we may have missed.

This is a project we started back in November and had immediate success with, but delayed announcing or hinting as we wanted to see what else could be done with the system and how close we could get to EA’s stair/ladder system. Unfortunately, it’s fairly hardcoded, but we’re quite happy with what we’ve done so far to replicate the system!

How does it work?

Though these spiral stairs are objects, they have a floor cutout that auto-applies upon placing down and will move with the stairs wherever you move it (or in case you accidentally move the cutout), making it work similarly to EA’s ladders/stairs. After placing the stairs down in build mode you are done, and sims can now use it automatically when needing to travel between floors. No need to click the stairs or do anything else, it functions like EA’s system.

The only thing we could not replicate so far was the auto height adjustment ladders/stairs do when walls are set to a different height, though sims can still route to the upper floors without issue if a taller wall is used, but will have animation weirdness when doing so. Our current plan is to make different height versions that can be placed down instead.

Another thing we are working on is auto-removal of the cutout after deleting the stairs. Right now it must be manually deleted as well if you delete the stairs.

You can also place stairs directly above each other on each floor and sims will route with them continuously when going to higher floors!

As explained, the Mod is currently in alpha testing phase. Animations have been converted from The Sims 3 with appropriate adjustments for Sims 4 Sims.

Toddlers at the moment are still a nuance and are expected to have fully developed animations sometime in the future. When it comes to Pets, they are a bigger challenge to tackle than expected:

For the first version of this release we only focused on fixing the bugs we could find and converting and adjusting the child to elder animations. Toddlers will have animations added at a later date, and pets will soon get teleporting as well in case a house only has spiral stairs placed, then animations (hopefully) further down the line. Pets are more difficult and we’re not sure if we may encounter any issues with them.

So far the Spiral Stairs Mod is everything than expected – and more!

If you want to get it right now, know that you might still encounter some bugs and issues here and there as it’s currently still being developed by the modders.

If you want to get it right now, it’s available as Early Access on thepancake1 and MizoreYukii’s Patreon. Public Release has been scheduled for October 17th!