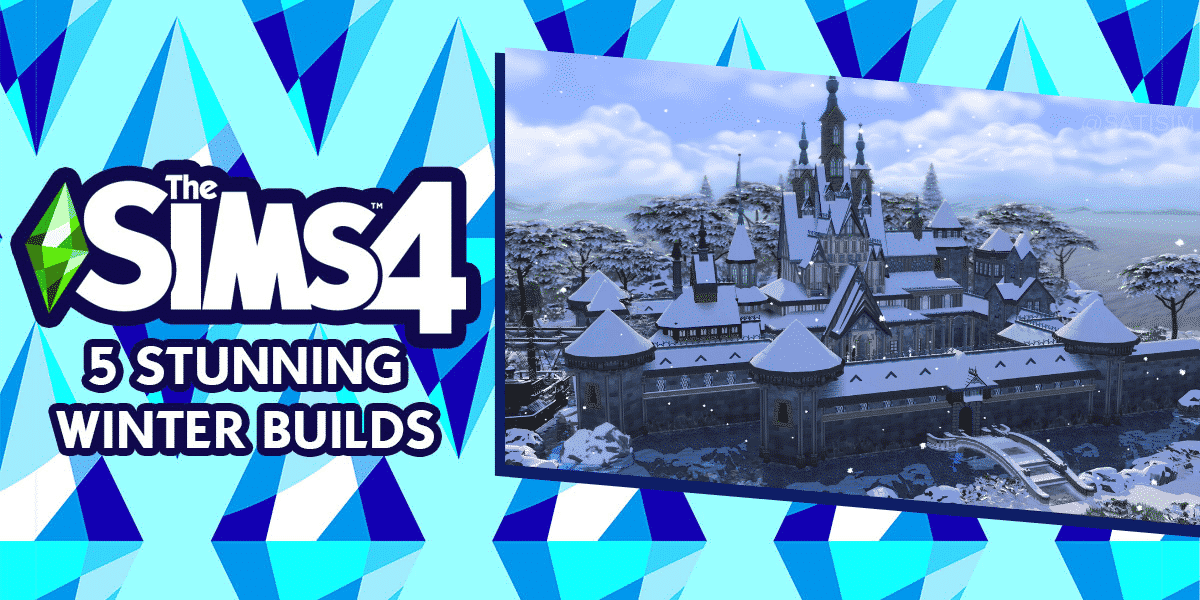 Hello Simmers and Happy Holidays to those that celebrate!

After receiving such a positive response to my last article showcasing amazing Real to Sims builds, I wanted to continue the format! With the Holiday Season upon us, there’s no better time to highlight some beautiful winter builds from more, talented, creators. The features below are builds that caught my eye over the past two weeks. There definitely are, and will be, many more incredible winter/holiday builds created; I encourage you to share the name and creator of those builds in the comments below! Discovering new creators/builders in this awesome community is something I love so much. With that being said, I’m so excited for you to see these builds! Without further ado, here are 5 very talented creators, and their stunning Winter builds!

So it’s safe to say when I was scrolling through my Twitter feed and I saw this build my jaw dropped. Ok, so maybe that happens A LOT (I’m always so impressed with everyone’s builds!)…but when I downloaded Sati Sim’s “Frozen Arendelle Castle,” it blew my mind! It’s a build I couldn’t dream of making, let alone have the willpower and drive to finish building it. It’s so beautiful in the snow, and I’m sure is equally as impressive without.

About the Builder: Sati’s little cousin was the one who introduced her to The Sims back when they were both just kids (Shoutout to Paul!). Although she encountered the game at an early age, Sati only got back into about two years ago! She gets inspired to build by anything from movies, TV series, and sometimes even songs. Her biggest inspiration, however, is her “favorite video games (besides The Sims) like WoW or Final Fantasy.” Sati states that what she loves most about building is “bending the limits.” Having actually started building with custom content, she decided to take on the challenge of uploading No-CC builds to the Gallery. She elaborated that, in regards to building with no custom content, “there came a need of creating new structures and objects with the items we have in-game and already know. I can create almost everything I can think of and that’s what I love most about building in The Sims 4!”

This creator is one that I admire so much! And not just because her name is also Sarah (but it helps). I’m continually amazed by how good her builds are. It’s another case where I’m not sure if I could ever even dream up a build as flawless as Sims 4 Creations’. I think what I like most about Sarah’s builds, is that regardless of how elaborate the build may be, I can envision it being real!

About the Builder: Sarah started playing The Sims in 2014 with The Sims 2 Ultimate Collection.  “I fell in love with the game and bought The Sims 3. Shortly after that The Sims 4 came out and it is my favorite game today,” she told me. She became inspired to share her builds in 2016 after she joined a The Sims 4 group on Facebook. Sarah remarked that her “biggest inspiration is the incredibly creative Sims Community on Youtube and in the Gallery.”  What Sims4Creations loves about the game is how creative you can get, and also how relaxing it is “to spend hours in build mode.” I couldn’t agree more!

One part I love about looking around for builds to feature is that I stumble upon creators I haven’t followed yet. Malin Designs was one of those cases, but I’m so happy I found her! When I saw this Christmas build I knew I needed to download it, and I was not disappointed in the least! I really enjoy the style of her builds, and am very excited to see more great content from her.

About the Builder: Back when The Sims very first came out in 2000, Malin, who was a little too young at the time, would sneak away to the computer and play her sister’s copy. That’s when she began building! Her builds started off as “one type” of family build that she could maybe “have in real life” when she got older. But it’s clear to see now, when you look at her builds, that MalinDesigns has definitely branched out! “There is so much I love with The Sims,” Malin professed. She believes it’s “an eternity game” meaning that you can start with one family and go on forever. Although she loves that aspect, what she loves most “has to be building” because “you can create so much!”

If you’re looking for festive, look no further! This is another instance where I’m so happy to have stumbled upon this creator. Although The Alleged Simmer has so many fun holiday builds to choose from, her Holiday (X-Mas) Street Shops really caught my eye! I’m so impressed by the quality of these winter builds, and also her youtube videos!

About the Builder: The Alleged Simmer, or Tomi Lyn, has been playing The Sims since the game was very first released. With a lot of hours logged in The Sims 2, and some in TS3, over the past few years The Sims 4 has been her game of choice. She admits that she’s not “much of a Sims 4 ‘player,'” but more so sees herself defined as a builder. “I’m often very inspired by real life,” Tomi Lyn told me. She went on noting that she’s “become especially aware of houses and buildings,” whenever she’s driving around. She “loves a challenge,” and also loves “seeing an interesting piece of whimsical or fantasy art.” Then, she thinks on how she could bring that to life in The Sims. Among many, one of her favorite things about the game is that “there is still always more to learn.” Elaborating that you can always find out “how to do some cool trick, how to get around a problem, or just in general learning how to build different types of houses.”

Wow. This build is truly unique! And let me tell you, after downloading you’ll see it’s even more amazing than it looks. If you don’t know, I’m a modern home fanatic. And this modern, winter, build really impressed me. Can we petition to have this made in real life for a James Bond movie?! I feel like the High End Design Villa is the perfect mix of elegant and modern.

About the Builder: During a sleepover with her friend, Irene discovered The Sims for the very first time. Her friend had just bought it, and Irene was hooked from the start! For the past few years, she has focused solely on building in the Sims 4. “Sometimes, ideas for builds are just popping up in my mind when I watch movies, series, or when I play other games,” Irene told me. Her other inspirations for builds come from Pinterest finds and fellow Simmers on Youtube. “There are so many amazing creators out there, but if I had to pick one I’d go for Kate Emerald. She does breathtaking builds and amazing tutorials.” I love it when talented creators are inspired from another in the community!

Well I hope you enjoyed all these builds as much as I did! Thank you so much to all the talented creators listed above. It’s truly a joy to be able to interview you and share your builds, and love for The Sims.

Happy Holidays to you and yours!

Consisting of husband and wife team, The Property Sims focus on Sims 4 builds and “real to sims” recreations. Sarah & Scooter have been fans of The Sims since its inception. Besides TS4 builds, they enjoy spending time with their two cats, traveling, and binge-watching shows on the couch together.