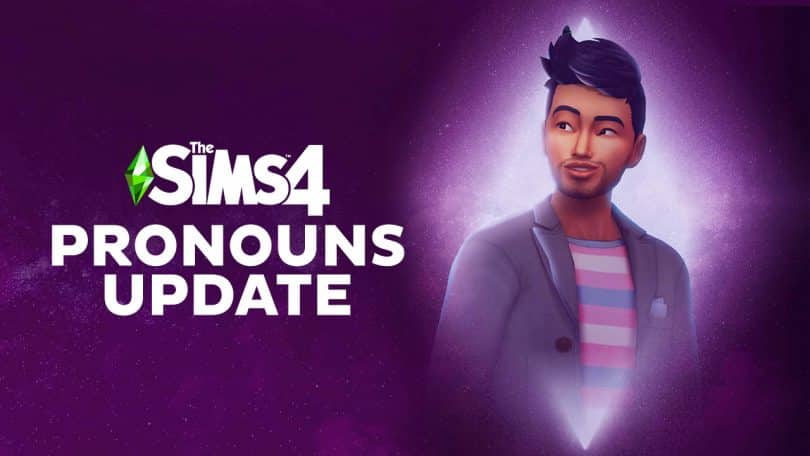 In the beginning of 2022 The Sims Team has held a very important Maxis Monthly Livestream. In this stream Maxis has revealed that they’ve been working on a new feature in Create A Sim for The Sims 4 – Customizable Pronouns!

In the livestream the team has shown off the Work in Progress Concepts of the revamped User Interface. Now featuring new options for Pronouns right next to the Name input.

The upper right corner will say “Hello, My Name and Pronouns are…”. After selecting it you’ll get to enter the Name, as well as choose the Sim’s pronouns from the new dropdown.

The upcoming Update will also feature Custom Pronouns, allowing you to add your own. There are grammatical guidelines in the new User Interface prompt that lets you see how your Custom Pronouns will look like through different examples of gameplay and UI prompts and notifications:

In January 2022 the team has shared in their interview information regarding when we can expect this update, and also at which state the feature was back then:

As you saw this is still a work in progress and our research and design will continue until we feel the feature is in the good place to be launched into the game. That being said we still have a path ahead of us and we want to make sure to check on you along the way and keep you updated. Once the first version of this feature is out please know that we are continuously working on improving the game and each update brings us one step closer to a greater, inclusive experience in The Sims 4.

You can read the full interview with the developers for full information about The Sims Team’s plans for this feature.

Yesterday, The Sims Team has announced a new Roadmap for The Sims 4. In the Roadmap the biggest focus was on the Paid Releases, including one new Game Pack and two Kits. Unlike with previous Roadmap Announcements, this one didn’t lay down specifics on Content Updates for The Sims 4.

That’s, of course, until we got an insightful tip from our reader @Mischaloola, who pointed out a very interesting clue. The Sim that’s featured in the main render on a redesigned layout of The Sims website is wearing a T-Shirt with the Trans Flag pattern on it:

To make things more interesting, we’ve checked out TheSims.com website today. The render that was shown yesterday got removed, with a new tagline:

Step into the Moonlight and explore who you are after dark!

Sure, it’s Pride Season this June. But that could only mean that The Sims Team has been preparing for that very special occasion to release the Customizable Pronouns Update!

We, of course, could be wrong. And this article is still purely speculative until we know for sure. But, the Trans Flag and the new tagline isn’t just there for nothing. And LGBTQ+ players all around the world, especially the Trans and Non-Binary Communities, need proper representation and escapism now more than ever.

So, here’s to hoping!