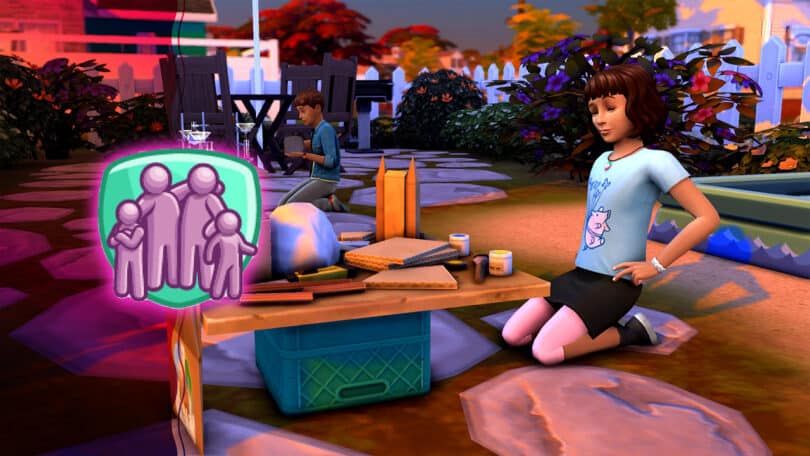 Our final playthrough of the new version Scenarios for The Sims 4!

The recent update for The Sims 4 has added three new permanent scenarios to the game; Stuck in Their Shadow, New in Town, and Parenting Predicaments.

Here’s how our playthrough of the Parenting Predicaments scenario went!

This scenario is a bit different from previous scenarios we’ve had. This scenario leaves a lot more room to play your own way, offering optional goals you can complete or ignore in order to go down different paths. The choices you make determine what your bonus reward will be at the end of the scenario. You can now also see the potential rewards when you start the scenario. Oh, and you’ll be playing with a premade household for this scenario; a married couple with child-aged twins.

The description states that Jennifer and Pablo are at their wits’ end about what to do with their badly behaved twins, Leonardo and Sofia. It’s up to you to decide what kind of teenagers they’ll grow into.

The goals for this scenario are far more intricate than previous scenarios. There are different stages of the scenario and in each stage, your choices will affect how future stages play out so we can’t really give a full breakdown of every goal like we usually do. However, we can break down the potential endings and rewards.

Set Up a Child-Friendly Home

I started by moving the family into Willow Creek and getting a bedroom all set up for the twins with bunk beds and some toys. Your goals for this stage of the scenario are pretty straight-forward. They revolve around making sure the twins’ needs are met. Talk to them, have a family meal together, make sure both kids get a shower or bath, then send them to bed for the night. Pretty easy stuff.

You also get some optional goals to put away leftovers and to have one of the kids eat the leftovers later.

Have Children Do Better in School

Uh oh! You get a call from the twins’ principal warning you that their behaviour is completely out of line. He blames you as the parent for not providing them with the support they need at home to succeed. Wow, rude.

Well, better save your kids’ academic career. Talk to both kids about school, have them both become Focused, and raise their grades to a B average. Optionally, you can also purchase a chess table, which is recommended for helping the kids become Focused. Of course, Sofia and Leo can’t raise their grades unless they start doing their homework so make sure they do their homework every night. Don’t forget to help them with their homework, too! The principal thinks you’re at fault for being a lazy, uninvolved parent, remember? Then send them to school in a Focused mood to ensure success!

Luckily for me, the twins’ brought home school projects which helped me raise their grades a bit faster.

Of course, academic success is not the only important thing in a child’s life. They have aspirations, too. I had my work cut out for me trying to raise the twins’ skills and complete an aspiration for each of them. Especially because…

The mom, Jennifer, had a little too much fun with Pablo while I was preoccupied with the kiddos and it resulted in… another pair of twins. I don’t even remember their names anymore but uh, welcome to the chaos, tiny nameless pixel babies. You will probably be neglected because you aren’t the stars of this scenario.

The crowded house being overrun with four kids all of a sudden meant I had zero time to do all the optional goals of sending Sofia and Leo to the park, the library, and making friends for them. I completely ignored all the optional goals for the first time ever in a scenario; however, I did manage to do all the required goals to make it to the next stage. Sofia and Leo both raised their skills and completed an aspiration.

Raise Your Children into Teens!

Now that Sofia and Leo were doing better in school and had fulfilled some of their other life goals, it was time to age them into teenagers! The game automatically force-aged the twins into teenagers as soon as we started this stage so you won’t need to wait for them to age up naturally.

The first goals were to give them both a makeover. Easy enough. I spent minimal time in CAS slapping some styled looks on the teenage twins. Then I had to pick teenage aspirations for them and finish the first level of those aspirations. Since all scenarios are designed to be base game compatible, I assume the game actually means choose any aspiration that a teenager can complete. Since I own High School Years and love it, I went with actual teen aspirations for them, though.

I planned to have Sofia be the good kid and Leo be the bad kid for the fourth potential outcome so I gave Leo the Live Fast aspiration and Sofia the Overachiever aspiration. Leo needed to pull a bunch of pranks at school which I was SO ready for, except…

Apparently, attending the active high school lot breaks the entire scenario. As soon as I got them to school, I had no scenario or school day goals and no option or ability to go to the map to travel or return home. I was completely trapped at school forever no matter what I tried.

I had no choice but to just abandon the save. Well, that was a lot of work for nothing.

It’s already been stated in my other two most recent scenario articles that I love this style of scenario. I think the goals are better, the different story outcomes are more interesting, and the rewards are more worthwhile.

Unfortunately, I cannot really recommend this specific scenario due to the fact that glitches prevented me from completing it on a mod-free save. If you do plan to do this scenario and own the High School Years expansion, I wouldn’t recommend following Sofia and Leo to high school or selecting an aspiration for them that requires them to go to the high school lot… which is a shame, because this scenario is perfect for High School Years and I would have thought using them together would be a no-brainer.