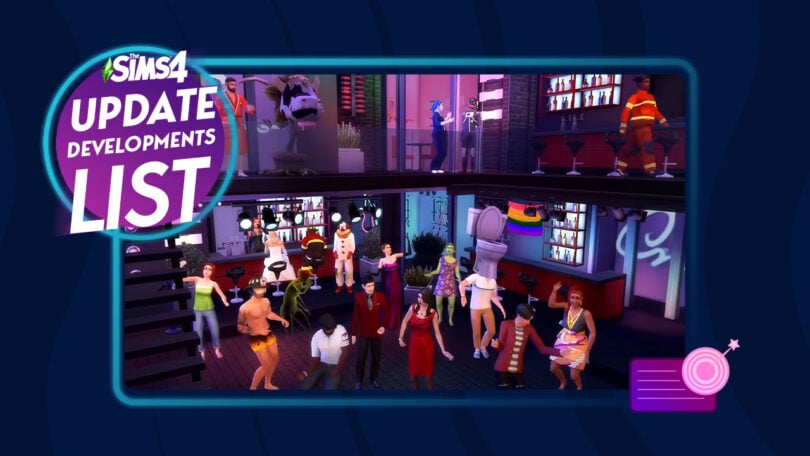 The Sims 4 has multiple features and updates that are actively in development. Find out what to expect more of in the future!

We’re wrapping up 2022 with plenty of memories, updates, pack releases and bug frustrations. The Sims 4 had become free for all with more ambitious plans down the line for the entire Sims Franchise.

Since 2020 The Sims Team switched things up with the way they start releasing content. We’ve had the release of Kits in March 2020, a bit of a different release schedule and quarter teasers, no Stuff Packs…

Seriously though, it’s been 2 years almost since Paranormal Stuff!

…and big updates for The Sims 4 that are just never really over! Including:

Some of the features listed above are currently being actively worked on by Maxis. Some have potential to be continued, while the future is unknown for Scenarios and Neighborhood Stories.

Either way, this is a list of features for The Sims 4 that are speculated to be continued with future development. Some being officially confirmed by The Sims Team!

We’ll be updating this list as the future evolves with confirmed and speculative information. Stay tuned!

Sexual Orientation Features in The Sims 4

In July 2022 The Sims 4 received a huge Base Game Update that covered many new features and improvements. Curved Walls, Wants and Fears, Body Hair and Sexual Orientation were just some of the highlights!

Speaking of, Sexual Orientation was one of the most important updates in The Sims Franchise history. Allowing players to, for the first time in forever, pick a sexual orientation for their Sims!

I want to again acknowledge that these topics are complex and full of nuance. We consider this a version 1.0, and are absolutely looking forward to seeing what further tools we might add to allow players to tell a broader range of stories.

One of the questions regarding the Sexual Orientation Update were the gender limitations. The Sexual Orientation feature in The Sims 4 currently only allows players to choose Men or Women for their romantic and WooHoo attraction. However, the team stated that they won’t stop there. Even if it means reworking someo of the 8-year old tech limitations of the game.

TS4 is 8 years old at this point, and reliant on systems that were originally architected with a gender binary in mind. In the intervening years, we’ve taken important steps such as Gender Customization, Pronouns and now Sexual Orientation. It’s a journey still in progress, with many more steps to go. Proper mechanical systems to fully support non binary Sims is another step in that journey.

With that being said, you can 100% expect more Sexual Orientation features in the future. Soon™, right?

The first iteration of Likes & Dislikes CAS Preferences was introduced back in May 2021. With the release of Sims 4 Dream Home Decorator Game Pack!

The first version of Likes & Dislikes features 3 categories including Music, Color and Activity.

The Dream Home Decorator Game Pack brought in the Décor category, with the Fashion preference arriving a year later with High School Years.

There is still a vast majority of areas that Likes & Dislikes could improve upon. From a limited list of Activities to an entire category of Attractiveness with other Sims, which was already taken care of by modders.

The only statement we got from The Sims Team was in July 2021 when they said they want to add new music preferences and activities.

Will the likes & dislikes system be expanded in the future?

Well we saw a very positive reaction from the community when we added the new likes & dislikes in the base game last month but we definitely don’t want to stop there! We definitely want to add new music preferences & activities as time allows.

Unlike with future development of the Sexual Orientation feature, the future of Likes & Dislikes isn’t clear enough. Still, there’s a lot of potential for them to be expanded further with upcoming two Expansion Packs coming next year!

Neighborhood Stories is one of the features for The Sims 4 that so far had 2 major updates!

The first version of Neighborhood Stories came out in November 2021, with another major release in March 2022.

The first iteration unlocked Story Progression through interesting new text prompts from other Sims. Allowing you to make decisions for your Neighborhood and impact other Households that you know.

The second iteration of Neighborhood Stories from this year unlocked new ways to set the ground rules. Giving you options for Neighborhood Customization per each Household.

The types of stories you can pick that can happen outside of your input feel a bit…unfinished. There are 9 Neighborhood Story scenarios to choose from, with only one incorporating an aspect from a previously released Expansion Pack – Cats & Dogs. (Adopt Cats & Dogs)

It’s unknown for this feature if it’ll continue with future development. So far, there have been 2 big updates for The Sims 4 Neighborhood Stories.

One of the highly expected updates still to come for The Sims 4 is the Households Overhaul. Or NPC Overhaul which was called initially.

Either way, this Update was only released partially in May 2022 with the SDX Drop that revamped the Goths Household.

Considering there is more than just changes to visual appearances, it’s expected that this update will also incorporate better lore and pre-made settings and starting qualities for each Sim.

The Households Overhaul Update still doesn’t have an ETA. There are updates for Households from Base Game to Cottage Living (Henford-on-Bagley) that need to be done, which is 7 years worth of original stories, lore and visual appearances. We’re really excited for this one and can’t wait for patch day!

Customizable Pronouns for The Sims 4

This one is a bit more challenging than you would expect. Not because it’s hard to make the game adjust to a new way of addressing and customizing pronouns in-game. But because it’s difficult to localize and translate customizable pronouns for other languages that are not English.

There are many logistics that need to be solved outside of English language to ensure that Custom Pronouns are done right in the game. The first iteration of Customizable Pronouns for The Sims 4 is currently only available if you play the game in English Language.

As stated by The Sims Team, this is only the first iteration of this feature that should be updated over time. And released for other languages when the team progresses on the development!

This first update for customizable pronouns to be supported in English is a step in the direction of a more inclusive experience for Simmers, and I’m excited to see how we’ll be able to evolve the game and feature over time to support more languages. While this update isnt the be-all end-all of representation of nonbinary and other gender diverse folks, we strongly feel that it’s important for us to approach better inclusivity over time as we figure out ways to work within the limitations of our code.

There is an interesting interview with one of The Sims 4’s developers that sheds light on the challenges Maxis has to overcome in order to localize this feature for other languages. Check it out!

With that being said, features like Pronouns, Sexual Orientation and even stepping outside of the current binary gender options are all in development by Maxis at the time of writing this article.

This feature is possibly among the top updated ones for The Sims 4! In just more than a year, The Sims 4 Scenarios feature has gotten several updates and improvements. From upgrading rewards and gameplay mechanics to expanding the selection of Scenarios.

The initial version of Sims 4 Scenarios worked more or less like walkthrough tutorials of the game. Over time this feature unlocked more ways to start a scenario, better and more challenging goals. Best thing though?

It seems that limited-time scenarios are becoming less frequent. We’re not sure why they were even a thing to begin with.

There is no clear statement about the future of Sims 4 Scenarios after so many updates to it. Still, it won’t come as a surprise if they’re among the Sims 4 features that’ll get seasonal updates.

The community still has high hopes in this feature. In our Sims 4 Scenarios Community Poll, the top voted options clearly show that there is room for improvement. And that those improvements will be more than welcomed!

Compared to previous features listed here, the Wants and Fears feature for The Sims 4 first and foremost needs a fine tuning. Players are reporting that the “Fear of Dead End Job” and some other ones are popping up more randomly and ocassionally than it normally should.

Other than that, the announcement and release of this feature was met with high hopes – and high critics. When this feature came out in July 2022 with the release of the High School Years, it was expected that the feature would be more inclusive than what we actually got.

The current system of Wants and Fears only includes Base Game and High School Years wants and fears. This successor feature to The Sims 2 only covers specific Wants and Fears from mentioned games. Meanwhile, the entirety of previous gameplay content from Expansion, Game and Stuff Packs has been skipped out.

Maxis confirmed that this decision was made due to the time they had developing the feature and Expansion Pack. The team is only considering adding new Wants and Fears through future Packs and Updates. Disregarding the catalogue of 10 Expansion Packs, 12 Game Packs and Stuff Packs where pack-specific Wants and Fears would certainly make sense in the game.

While creating High School Years we focused on that pack and adding previous base game content with the time we had.

Future packs and updates could add more where it makes sense.

It’s uncertain if Wants and Fears will ever get retroactive content related to previous Sims Packs post-HSY. However, you should still expect more from them with future Pack releases and Updates.

What are your thoughts on this feature list? Let us know!